A massive fire broke out during repairs to a Russian nuclear-powered submarine at a shipyard near the northern port of Murmansk, and from nine to possibly 19 people were delivered to a naval hospital with burns and injuries, but it remains unclear if the fire has been fully extinguished, sources have told Bellona.

Published on December 29, 2011 by Charles Digges 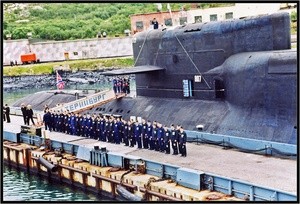 The Russian Emergency Ministry says no leak of radiation has been detected, and nobody has been injured. But other officials and media reports have indicated that there are still “pockets of fire” that have not yet been extinguished.

The Yekaterinburg submarine was being repaired when wooden structures in the dock caught fire during welding works and the blaze spread to the vessel, said Russian media.

Television pictures showed a giant plume of smoke above the yard in Roslyakovo yard 1,500 kilometres north of Moscow, and said helicopters were trying to douse flames which witnesses said rose 10 meters above the stricken vessel.

It was in fact civilian eyewitnesses of this plume of smoke who reported the blaze to the Emergency Services Ministry, and not the Navy, according Reuters, citing Murmansk media.

According to military officials who spoke with lifenews.ru, a Russian news website, authorities intended by mid evening Murmansk time to submerge the vessel up to the conning tower, as well as the still burning dock, to extinguish the remainder of the flames.

According to ITAR TASS, the Yekaterinburg was submerged at 10:35, though the report did not say if the effort had been successful. Later reports from Murmansk indicated however that the blaze was ongoing.

Those who were delivered to a nearby naval hospital in Severomorsk with burns and smoke inhalation were members of the sub’s crew as well as repair workers. According to ITAR TASS, the workers had been on the dock, and not aboard the vessel, when they sustained their injuries.

Official reports said that nine people had been delivered to the Severomorsk naval hospital. However, members of the Russian social networking site vKontatke – which is similar to facebook – who have relatives who work in the hospital, were unified in saying that 19 injured crew and workers were brought in for treatment.

The local branch of the Emergency Services Ministry confirmed that several crewmembers were aboard the submarine when the fire broke out.

Defence Ministry holding out on information

However, the Defence Ministry has refused to divulge, even to the Emergency Services ministry, how many crewmembers were aboard.

Russian defence officials said all weapons had been removed from the submarine before it entered the dock. But other media in Murmansk contradicted that, reporting that 12 torpedoes and 16 missiles were on board.

Bellona’s executive director and nuclear physicist Nils Bøhmer said that the uncertainty of whether the fire was external to the submarine or had also spread to the inside was troubling.

Dangers of an internal fire

“We know that scaffolding and rubber on the exterior of the submarine were affected but the implication that there are still ‘pockets of fire’ that may be on the inside of the sub is extremely dangerous to the reactor and could lead to a release of radiation,” he said.

“Fire aboard nuclear submarines are among the worst case scenarios” for such vessels, precisely because the vulnerability of the nuclear fuel, he said.

Eleven fire crews from the Emergency Services Ministry and a navy launch were dispatched to the scene, the authorities told media.

The Yekaterinburg is a Delta-IV-class nuclear-powered submarine.

The Russian defence ministry said the nuclear reactors on the vessel had been shut down.

“The power unit was switched off and is now safe,” a defence ministry spokesman, Igor Konashenkov, told Russian state television.

Konashenkov said the fire had started on the wooden scaffolding and then engulfed the submarine’s outer hull on the nose portion of the submarine. Most modern submarines’ outer hulls are covered with rubber to make them less noisy and more difficult for an enemy to detect.

Radiation leaks may not be ruled out

But Bøhmer refuted that the sub was out of the woods.

“We still do not know if there has been any radiation spread and still don’t know if the fire is out,” said Bøhmer.

Konashenkov insisted in his televised comments that fire had not spread to the interior of the vessel, saying, “The fire spread to the sub’s light outer hull. The fire cannot spread into the sub – there is no threat to onboard technical equipment.”

Fire inside the sub, said Bøhmer, meant a risk of radiation releases.

The 18,200-tonne Yekatarinburg was commissioned by the Soviet Union in 1985 and can carry 16 intercontinental ballistic missiles.

Safety on Russian navy submarines is a sensitive issue for the military following the Kursk disaster in August 2000. The Kursk was a nuclear submarine which sank in the Barents Sea off north-west Russia killing all 118 seamen on board. Investigators concluded that an explosion of fuel from one of its torpedoes caused the sinking.

In that case, as with many other nuclear submarine accidents since, the Russian Navy has been less than forthcoming about the dangers at hand. Russia refused foreign assistance to free surviving crew members who remained aboard the Kursk at the sea bottom for nearly a week before the emergency hatch was eventually opened by a Norwegian diving crew.

All who has survived the initial blast and had survived for nearly a week in the wrecked hull were found dead.

The last three weeks have not been kind to ecologically dicey Russian maritime endeavors.

On December 15, a fire aboard the Vaygach Russian nuclear icebreaker killed two and injured another as it was en route from the mouth of the Yenesei River, 2,800 km northeast of Moscow, as the vessel was breaking way for a freight carrier.

On December 19, the jack-up oil rig, the Kolskaya, capsized and sank within twenty minutes during a storm while being towed from West Kamchatka. Question remain as to whether the rig was being used to drill in defiance of environmental authorities’ objections.