UPDATE: Fire aboard Russian nuclear submarine said to be extinguished

A major fire that broke out on a Russian nuclear submarine in dry dock on Thursday has been extinguished Emergencies Minister Sergei Shoigu said on Friday, while firefighters continue to spray the vessel with water to cool it down.

Published on December 30, 2011 by Charles Digges 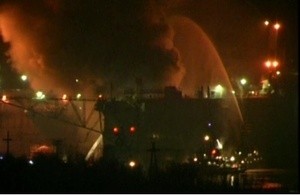 Firefighters battled the blaze for nine hours after it broke out on Thursday on a wooden deck near the Yekaterinburg. It was eventually decided to submerge the vessel to put out the fire, the BBC reported, though even that did immediately succeed.

The vessel continued to smolder into morning before it was declared by Emergency Services officials to be out.

The Yekaterinburg Delta-class nuclear submarine caught fire on Thursday during repairs at a shipyard in the northwest Russian Murmansk Region. Welding works on a wooden scaffold around the vessel went awry, igniting first the scaffolding itself and then the rubber light outer hull of the submarine.

Fire safety violations are being cited as the cause of the massive blaze.

Earlier on Friday morning, fire brigades were reported to still be pouring water on the outer hull to extinguish smoldering element between the outer hull and inner hull, but no open flames were visible, said the defense ministry in a statement.

A chief concern among observers has been why the fire burned for so long.

Bellona’s Alexander Nikitin, a former soviet naval captain, said the rubber outer hull, which initially caught fire yesterday, is some 15 centimeters thick, but is also porous. Such hulls are routine on submarines to dampen noise so they can hide from enemies.

Nikitin said that to extinguish the fire, this rubber hull had to be torn from the vessel, as it has a tendency to burn from the inside out.

A 10-meter plume of black smoke was seen from miles away yesterday, and the fire was initially reported to the local branch of the Emergency Service Ministry by civilians, not the navy.

President Dmitry Medvedev has ordered an investigation of the fire, and has been receiving updates on its containment directly from Shoigu and Defence Ministry Anatoly Serdyukov, according to the Interfax news agency.

Andrei Zolotkov, head of Bellona Murmansk, confirmed from media reports in the Murmansk area that the fire was reported to be contained.

But because the fire at the Roslyakovo shipyard, 1,500 kilometers north of Moscow, is located within a closed military zone, there was no way to independently corroborate the information that was being furnished by naval and Defence Ministry officials who were flown in from Moscow, said Zolotkov.

Several crewmembers were taken to hospital last night with burns and smoke inhalation injuries. Official reports said nine had been taken to the naval hospital in nearby Severomorsk.

But several people on the Russian online social networking site vKontakte, who claimed to have relatives who worked at the hospital, said as many as 19 people had been brought in for treatment.

Other official reports quoted an anonymous law enforcement official as saying seven naval servicemen and two members of the Emergency Services fire brigade had been hospitalized with smoke inhalation. The source did not say if the victims had been sent home.

While some crew members were reported by various media sources to still be on board the submarine Friday morning to measure carbon dioxide levels, the Defense Ministry still refused to disclose, even to the Emergency Services ministry, how many crewmembers were on board when the fire broke out.

Questions remain, however as to whether there were nuclear weapons aboard the submarine when it caught fire or not.

Nikitin, who is also the chairman of the St. Petersburg-basedEcological Rights Center Bellona, said that submarines placed in dry dock for long periods of time routinely have their weapons removed.

But if a sub is putting in for only a short period of time and the submarine is still officially on patrol, weapons can remain on board.

The 18,200-tonne Yekaterinburg is designed to carry 16 intercontinental ballistic missiles, each with four warheads a piece, and 12 torpedoes.

Zolotkov indicated that he had heard conflicting reports about the disposition of the weaponry. The Defense Ministry insists that no weapons were on board, while various other sources to Russian media outlets said the missiles remained on board.

“The only people who know for sure are the crew, and they are not talking,” said Zolotkov.

Other Russian nuclear submarine accidents over the last ten years

Safety on Russian navy submarines is a sensitive issue for the military following the Kursk disaster in August 2000. The Kursk was a nuclear submarine which sank in the Barents Sea off north-west Russia killing all 118 seamen on board. Investigators concluded that an explosion of fuel from one of its torpedoes caused the sinking.

In that case, as with many other nuclear submarine accidents since, the Russian Navy has been less than forthcoming about the dangers at hand. Russia refused foreign assistance to free surviving crew members who remained aboard the Kursk at the sea bottom for nearly a week before the emergency hatch was eventually opened by a Norwegian diving crew.

All who has survived the initial blast and had survived for nearly a week in the wrecked hull were found dead.

But other safety incidents have plagued Russia’s nuclear submarine fleet. Over the past 10 years, here are some of the more serious events:

On November 8, 2008, more than 20 people were killed and another 21 injured by toxic gas when a fire safety system misfired on Russia’s Nerpa nuclear submarine during trials in the Sea of Japan. The submarine was leased to India last month.

On September 6, 2006, a fire on board a Viktor-III class Russian navy submarine killed two crew. The Svyatoi Daniil Moskovsky was moored in the Barents Sea, north of the Rybachiy peninsula near Russia’s border with Finland when it caught fire.

On August 1, 2005, one was worker is killed and another seriously injured in an explosion on a decommissioned Victor-III class Russian nuclear submarine docked in the northern shipyard of Severodvinsk for dismantling.

On August 30, 2003, a Russian nuclear-powered submarine, the K-159, sank as it is being transported through the Barents Sea on its way to a scrapyard at the port of Polyarny. Nine out of the 10 crew aboard died.

And a host of other fires aboard nuclear powered submarines during the Soviet period resulted in loss of life.

But even the past three weeks have been unkind to Russia’s ecologically questionable maritime endeavors. On December 15, a fire aboard the Vaygach Russian nuclear icebreaker killed two and injured another as it was en route from the mouth of the Yenesei River, 2,800 km northeast of Moscow, as the vessel was breaking way for a freight carrier.

On December 19, the jack-up oil rig, the Kolskaya, capsized and sank within twenty minutes during a storm while being towed from West Kamchatka. Question remain as to whether the rig was being used to drill in defiance of environmental authorities’ objections.