MOSCOW – Adverse weather conditions – and the resulting threat of power outages – are said to have caused the shutdown of six research reactors in operation at the State Scientific Centre “Research Institute of Atomic Reactors” in Russia’s Dimitrovgrad. One of the reactors was brought down by an emergency signal from the safety and protection system.

Published on December 10, 2010 by Andrey Ozharovsky, translated by Maria Kaminskaya 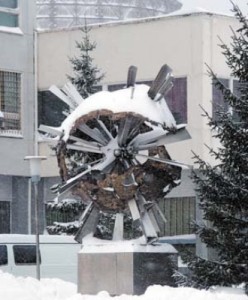 A statement issued by the Russian State Nuclear Corporation Rosatom’s Crisis Management Centre on the morning of December 6 said that a research reactor dubbed BOR-60 – for Russian “Fast Experimental Reactor 60” – was shut down at the institute, which is part of Rosatom’s vast nuclear industrial and research domain.

The institute – NIIAR, in its Russian acronym – is located in Dimitrovgrad in Ulyanovsk Region in Central European Russia and, according to a description available on its website, carries out “system and production research related to topical trends of the nuclear power engineering development.”

“On December 06, 2010, at 03:03 am,” Rosatom’s statement read, “reactor unit BOR-60, while in operation at a capacity of 31 megawatts, was shut down by the slow emergency protection system due to a voltage dip in the external power supply system.”

It was apparently because of a risk that the other five reactors might have to be scrammed as a result of the power supply fluctuations that the institute’s management later decided to take the remaining reactors offline. The Russian press quoted NIIAR’s press secretary Galina Pavlova as saying: “We have shut them down, but these were not emergency shutdowns. The management have ordered the shutdowns because of a potential risk of power outages, and power supply is indispensable for the operation of a reactor. So, to avoid scramming, the decision has been made to shut them down now.”

Pavlova said nothing about the scram of BOR-60, which preceded the other, intentional shutdowns. As of December 6, the institute’s website was likewise down, possibly, owing to problems with power supply.

“The reactors have been shut down in order not to take risks posed by the unstable operation of power systems,” Pavlova said to the Russian Rossiyskaya Gazeta. “If power supply is cut to a reactor, the reactor’s protection system kicks in. But taking a reactor [back online] after a scram is a more complicated process than re-starting it under normal operation conditions. This is why this decision was made. The situation is under control. When it is stable again, the reactors will be taken back online.”

Bellona Web spoke with Mikhail Piskunov from the Dimitrovgrad-based Centre for Assistance to Citizen Initiatives, a grassroots group aiming to promote democratic and economic reforms and foster better interaction between citizens and the government. Environmental protection is one of spheres of interest for Piskunov’s organisation.

“Power shortages started on Sunday, December 5. That day – meaning, before BOR-60 was scrammed – power supply was cut repeatedly to certain city districts. Then, there were breakdowns in cold water supply,” Piskunov said. “The cause was extreme black ice and glaze ice conditions. Trees and power lines have been falling, brought down by the heavy burden of ice. An emergency situation has formed in Dimitrovgrad and a number of neighbouring areas.”

The unscheduled shutdown of NIIAR’s six reactors exacerbated the critical situation with energy supply in the city. BOR-60 was used to provide heat to the institute’s industrial operations premises, while another reactor – a boiling water model dubbed VK-50 – was plugged into the grid and fed power into Russia’s Unified Energy System.

This is not the first time that Russian reactors have had to undergo an emergency scramming procedure or had to be shut down owing to adverse weather conditions causing power outages. On February 2, 1993, a snow storm took down all high-voltage power lines connecting Kola Nuclear Power Plant – a site on the Kola Peninsula in Russia’s Far North – to the grid, causing shutdowns of all four of the plant’s reactors. NIIAR, too, has previously experienced similar circumstances: Four of its reactors were stopped on March 27, 2005 because of power supply failures.

With extreme weather patterns starting to be an ever more frequent occurrence in the recent years, Russia seems precariously exposed to similar contingencies both in the winter and during summer months, when wildfires become a potential hazard.

Last August, wildfires brought on by record high temperatures raged through Central Russia, putting at grave risk safe operation of at least two nuclear sites – Novovoronezh Nuclear Power Plant, in Voronezh Region, where a reactor was scrammed because of breakdowns in power transmission lines, which had been damaged by fires, and the All-Russian Research Institute of Experimental Physics, a nuclear research facility in Sarov, Nizhny Novgorod Region, where wildfires spread as far as inside the institute’s testing grounds. The situation became so extreme in Sarov that the institute was forced to evacuate all explosive and radioactive materials from the site.

Commenting on the recent shutdowns, NIIAR insisted that the incident did not pose any threat to the population.

“Even an automatic emergency scram is not an extreme event. And here, the reactors were stopped by specialists following an instruction from the administration,” NIIAR said.

However, it may be more complicated than this. Even though research reactors are much smaller than those operating at nuclear power plants, these reactors, too, are sources of nuclear and radiation risks. When a research or experimental reactor is shut down – especially if it is an emergency shutdown – processes involved in the transition from one operating mode to another can potentially lead to accidents. If a sudden drop in power supply causes the cooling systems to stop, this may lead to an overheating of the reactor and a meltdown of its core, which spells a serious accident.

During one accident at NIIAR, on July 25, 1997, seal failure occurred in a fuel assembly in one of the reactors – MIR-M1, for “Multi-Loop Research Reactor,” a model used for the testing of experimental fuel rods and reactor structural materials operating under a range of loads and conditions. The reactor was shut down for a fuel reload, but a day later, as pressure was being brought down in the shut-down reactor, the situation with loss of seal in fuel assemblies recurred – and this time, at a far greater scale than the day before.

This was followed by elevated discharges of radioactive iodine-131 into the atmosphere, which continued for almost three weeks. On some days during this three-week period, the maximum acceptable limit for iodine-131 discharges allowed to NIIAR was exceeded by 15 to 20 times.

According to the Russian federal industry oversight agency, Rostekhandzor, problems with power supply are not the only cause of potential accidents at Russia’s research reactors. The supervisory body reports that other causes include “wear and tear of component parts, control and measuring instrumentation, and errors on the part of personnel.” In 2009, the agency said in its annual report for that year, NIIAR alone was responsible for five operational violations that regulations require be subject to documentation.

At the moment, NIIAR is operating six research reactors, with the oldest taken online as far back as the 1960s. A seventh reactor, a pool-type model dubbed RBT-10/1, is being decommissioned, but may, just as the other reactors, be at risk if further power outages take place in Dimitrovgrad.

Reactor shutdowns, furthermore, are not the only trouble a reactor-operating site may face when affected by a power outage. Just like reactors at nuclear power plants, research reactors produce spent nuclear fuel and radioactive waste as they burn their fuel, and systems responsible for the safe management of this waste may come under risk if they stop receiving power needed for their operation.

Moreover, NIIAR practices disposing of radioactive waste in deep geological formations – or deep underground burial. Both the pumping of liquid waste underground and maintaining safe operation of the wells are impossible without reliable power supply.

According to Piskunov from Dimitrovgrad’s Centre for Assistance to Citizen Initiatives, the situation at NIIAR is telling if only because it showed a lack of clear information on the incidents from the facility itself, city officials, or the local media.

“What happened with reactor shutdowns at NIIAR on the night of December 6 demonstrated once again this nuclear centre’s lack of preparedness for emergency situations that occur here. On the evening of December 6, when various rumours started spreading in the city, both NIIAR’s website and the website of the administration of the city of Dimitrovgrad became inaccessible,” Piskunov said. “And as for the local television – there was complete silence on the situation at NIIAR.”

Weather experts forecast that conditions will remain changeable in the region. As the English translation of this report was being prepared, temperature fluctuations were predicted for the week of December 10, with cold fronts and precipitation alternating with warmer temperatures of up to zero degrees Celsius and changing back to below-zero temperatures – conditions fairly propitious for the formation of ice cover. Power outages in Dimitrovgrad may thus repeat in the foreseeable future.