The Russian Navy has successfully tested an Akula class nuclear attack submarine nine months after 20 sailors were killed and 21 more hospitalsed when the fire suppression system badly failed aboard the same submarine during trials in December, the sub’s builder and Russia media have reported. 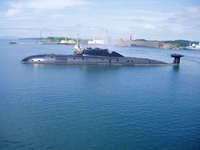 The submarine accident, the worst to hit the Russian navy since 118 sailors died in 2000 when the Kursk nuclear submarine sunk in the Barents Sea, exposed the gap between the Kremlin’s ambitions and its military capabilities, giving the Navy yet another black eye.

A fresh sea trial of the Soviet-designed Nerpa submarine began on July 10th in the Sea of Japan and was completed successfully, RIA quoted a source at the Amur shipyard, where the submarine was built, as saying.

"The first stage of the test was completed successfully," the source was quoted by the state-run RIA Novosti Russian news wire as saying.

"The craft is in base (…) to prepare for the second stage of the test," he said. He did not comment on when the submarine would be fully ready.

Another, higher ranking official at the Amur shipyard declined to comment on the reported test when contacted by Bellona Web. The navy similarly would not officially comment on the recent Nerpa sea trials.

The initial accident on the Nerpa last November was chalked up by Bellona’s Alexander Nikitin, a former sub captain in the Russian navy, to the sheer number of people aboard the submarine during it’s original sea trial. The crew of a standard Akula class submarine numbers 73, and three times as many were aboard during the accident.

Nikitin, head of Bellona St. Petersburg’s offices, and the Russian Navy said this is standard practice as a crew from the shipyard that built the boat will be onboard during sea trials with the naval crew that will be putting the boat to sea for active duty.

But the Amur Shipyard had not built a submarine in more than a decade. Therefore, according to Nikitin, a brain-drain had occurred among the shipbuilders as less experienced shipyard crew members – many of whom had never been to sea before – were aboard when the November accident occurred.

The last submarine to have been under construction at the Amur Shipyard was, in fact, the Nerpa. But construction was halted when funding ran out, and 15 years of sitting in dry dock did nothing good for the condition of the vessel.

The Indian Navy had said it is interested in leasing the Nerpa, though Russian Naval officials and officials at the Amur Shipyard said Tuesday they could not confirm these reports.

The NATO code-named Akula, or Shark submarine have been in service since the mid-1980s and are armed with torpedoes, cruise missiles and can carry underwater missiles.

Eyewitnesses on the accident
The Nerpa submarine was undergoing sea trials in the Sea of Japan last winter in the Pacific when the fire suppression system spewed out freezing and toxic liquefied Freon gas that asphyxiated 20 victims.

Eighty-one of those aboard were Russian Naval seamen. The rest were inexperienced civilians, who constituted 17 of the 20-strong death toll.

Some of the 21 survivors interviewed told Russia Television they were caught completely unawares.

"A siren blared and Freon came streaming in immediately," shipyard worker Viktor Rivk said on Russia’s NTV television, speaking from a hospital bed in the Pacific coast port of Vladivostok. He was visibly enfeebled and exhausted and the bridge of his nose was bruised.

Russian submarines use Freon gas, a powerful anti-oxidant to extinguish fires in the closed and sealed quarters of a submarine, Nikitin said in a comment he wrote on the accident in November.

By thus sucking the oxygen out of the air, fires are extinguished. But the consequences are lethal if crew members are not alerted beforehand to don their personal breathing apparatus, or run for the nearest stationary breathing post with which submarines are equipped.

Fire alarm sounded after Freon dump
But other survivors said the siren warning the crew that the fire-fighting system was about to be activated might somehow have been delayed, NTV reported.

According to seaman Denis Kashevarov, the alarm sounded after the Freon came streaming into the bow compartment of the submarine, where most of the dead and injured were located at the time of the accident. He said a second wave of Freon came shortly afterward and he passed out.

The Russian daily Komsomolskaya Pravda quoted another survivor, Sergei Anshakov, who also said the alarm went off only after gas began to pour. A duty officer on the intercom then ordered everyone aboard to don breathing kits, Anshakov said, as quoted by the newspaper.

Anshakov said some of the victims may have died because they were sleeping immediately under the stream of Freon, or because they panicked, or couldn’t immediately reach their personal breathing apparatus.

Navy spokesman Capt. Igor Dygalo told Russia’s Interfax newswire that there had been no fire and that the fire system was somehow tripped in error.

But the state-run RIA-Novosti news agency cited an unidentified official on the government panel investigating the incident as saying that the system had been in working order.

Navy experts have said that the overcrowding aboard the submarine that resulted from having both a navy and a trial crew aboard, and human error, may have contributed to the accident, the Associated Press reported.

Sea trials pose special risks
Former submariners told AP that sea trials always pose increased safety risks because of the large number of unqualified people on board. They say every person on board must permanently carry an oxygen kit, but many civilian workers may not have had the experience necessary to use them.

A former submarine captain quoted by Komsomolskaya Pravda noted that the vast majority of those killed in the accident were civilian workers – and that they were the least experienced or educated in dealing with emergencies at sea.

"I know from my own experience that instructions given to industrial personnel taking part in tests are a formality," the daily Komsomolskaya Pravda quoted retired Captain Nikolai Markovtsev as saying.

Breathing kits were available for everyone on the submarine, according to an official on the investigative commission, AP quoted the commission as saying.