Equipment from the wreck of the derelict Russian battle cruiser Murmansk, which has foundered for the past 14 years off the Northeastern coast of Norway near the town of Sørvær contains radiation and numerous toxins, Norwegian officials said over the weekend. 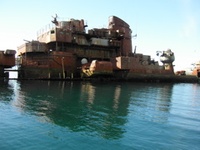 The announcement was followed by a Monday admission from Norwegian Fisheries Minister Helga Pedersen that her ministry had know the wreck, languishing in the coastal rocks, had contained poisons to the environment for some three years already, she told NRK Norwegian Television.

Pedersen had said last week that that she hadn’t seen data that the more than 200-meter long Murmansk contained any ecologically dangerous substances such as polychlorinated biphenyls (PCBs) and flame-retardants.

The Murmansk ended up on the shores near Sørvær in Norway’s Finnmark region in 1994 when broke loose from its towline while being hauled from a northern Russia seaport to India for salvage.
when it broke

“The shipwreck should have been taken away long ago,” said
Bellona President Frederic Hauge.

Bellona once again asserted that the shipwreck should immediately be removed from the shore where it has laid for the past 14 years.

“It’s embarrassing to hear Pedersen explain it away. We expected more,” said Hauge.

“The way she handled it contributed to the spread of fear and uncertainty. This also shows that Pedersen is trying to avoid costs to her own budget. It is she who has the pull in the government to haul off the wreck. She should use this influence,” he said.

Radioactivity overplayed by Norwegian media
The most shocking revelations about the ship, however, appeared in Norwegian media yesterday, when the national paper Aftenposten reported that parts from the ship that the Eurovironment group was planning to recycle turned out to be radioactive.

Indeed, Norway’s Radiation Prevention Authority confirmed this, but characterised the level of contamination to be a “minor event.”

The Authority’s Ole Reistad said that radiation readings are low, but high enough that people should not come into direct contact with the ship or its equipment.

"We inspected the equipment and got relatively low readings. Nevertheless they were strong enough for it to be unwise for people to come into direct contact with the material," he said.

Environmental groups knew of low levels of radiation
Last year, Bellona, in conjunction with the Veolia international environmental services group had already established the presence of some radioactivity aboard the Murmansk, and gave its research to the Norwegian Radiation Prevention Authority.

Bellona has for many years said that the radioactive equipment and the corresponding shipwreck should be taken out of coastal rocks.

The ship must be removed
Brastad and Bellona’s daily manager Nils Bøhmer met Tuesday with Mayor Eva Husby of the Hasvik Municipality, where the shipwreck is located.

Later in the day, Husby met with Fisheries Minister Pedersen. Husby has told Norwegian media that she has the same demands for the Murmansk as Bellona – that it be taken away as soon as possible.

“There is no law saying one can dump their car in coastal rocks, but an entire Russian battleship has managed to lay there for 14 years,” said Brastad. “It should not be any different when the state is has the responsibility, any more than when you or I have the responsibility.”