CHERNOBYL, Ukraine—Twenty years ago tomorrow, April 26th, 1986, the No. 4 reactor of the Chernobyl Nuclear Power Plant exploded, spreading into the atmosphere countless radioactive elements that settled all around the world. It was the worst nuclear disaster in recorded history and the name Chernobyl has since become synonymous with catastrophe.

Published on April 25, 2006 by Rashid Alimov, translated by Charles Digges

Some 600,000 people took part in cleaning up the consequences of the disaster. Entire villages were leveled and cities abandoned. Bellona environmentalists and journalists are here in the wastelands of Chernobyl to cover this dark and chilling anniversary.

Beyond a road barrier at checkpoint Detyaki lies the Chernobyl Zone—an area defined by a 30 kilometre radius around the remnants of the exploded reactor. A spring day. Barbed wire strung about with the red and yellow signs indicating radiation hazard. A monument to the right of the checkpoint a combination of the Russian Orthodox cross and the Catholic Mother Mary. The background radiation level is high, but within accepted norms—28 to 30 microroentgen per hour. They say that 20 years ago, at the moment of the accident, the background radiation at Detyatki reached into the thousands.

We climb out off a bus to await the approval of our credentials at the checkpoint.

“On April 26 there was no information. Then information started to trickle in, but only to the big bosses, the party nomenclature. Others who heard the voice also learned about the catastrophe, but could not believe it because of the full official silence,” recalled Katya Perovskaya, a journalist from Berlin. On May 1st 1986 she was a student at school 77 on Lutheran Street and abandoned Kiev as the whole city turned out for traditional Soviet May 1st celebrations: To this day, it is not known who, someone advised her parents to send her to Moscow. Those who turned out for the May Day celebrations on that warm spring day, which was most of Kiev, were irradiated by radioactive rain.

Then, in the metro, people frequently began to repeat the previously unknown word “radiation,” and rumors about some “black cloud” from Chernobyl.

Panic began on May 5th 1986. One couldn’t get a ticket in any direction. Party functionaries forbade that children go outside. “Either take your children inside—or surrender your party card on the table,” officials said. Word was needed for simple mortals…

We have completed our document check and the gate rises. We are in the zone. Only those sanctioned to work in the zone and at the Chernobyl station, and 19 illegal elderly squatters who have returned to their native homes, live here. The government considered their age looking through smoked glass: After all, they’re just old codgers, so the reasoning ran. But those younger than 18 are absolutely forbidden to enter the zone. 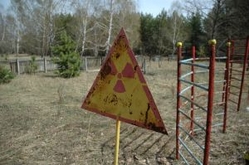 Valentina does not complain about her heath. She confirms that many who moved have already died, but she is alive and well. She plants potatoes. Her grandchildren come to visit. But her great-grand children cannot come because of the ban on children under 18 entering the zone. The background radiation in the village is normal. Asked if there are any contaminated plots in the village, Sergei interrupts and answers emphatically no. We don’t press the question.

Our guide Sergei speaks with evident regret about the three reactor blocks that were shut down at Chernobyl and the two that were never completed. In his opinion, nothing hindered their continued operation.

It is clear that people who work there admit to the tragedy as a matter of fact, but want to convince visitors that there really is nothing wrong. The consequences are unknown. There is even a booming little business for Chernobyl tourists.

On parting, Sergei says to us “Thanks, sorry if there was anything wrong.” We tell him that: “Here, everything is wrong," but he has already ceased to listen. He exits the bus and climbs into a car. We are neither the first nor the last to take his excursion.