Kuroyedov declares ‘Peter the Great’ could explode ‘at any moment’

Russia Naval Chief of Staff Vladimir Kuroyedov ordered Russia’s flagship nuclear battle cruiser, the Peter the Great, rushed back to port, saying after a tour he took of the vessel last Wednesday that “it could explode at any moment.” 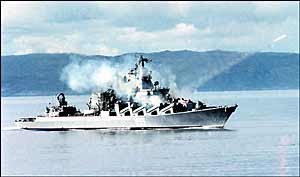 "The ship is in such a state that it could explode at any moment," Vladimir Kuroyedov told reporters in Moscow. He ordered the measure after a tour of the ship on Wednesday last week during naval exercises in the Barents Sea, the Interfax news agency quoted him as saying.

It was not immediately clear what port the ship was being sent back to, nor was the reason for the naval chiefs dire prediction about the ship, which according to Russian press reports, had been performing well in recent military exercises, despite mishaps aboard other vessels.

Some naval and environmental experts, including Bellona, were extremely skeptical of Kuroyedov’s actions and suggest that his ordering of the ship back to port was the result of ulterior motives. The Bellona foundation as a whole considers that Kuroyedov is "dramatizing the situation" and that there is no danger that the ‘Peter the Great’ is in any immediate danger.

"You can say that any ship is capable of exploding at any time," said Alexander Nikitin, Chairman of Bellonas St Petersburg office and a former naval captain first class.

Igor Dygalo, chief spokesman for the Russian Navy somewhat contradicted Kuroyedov saying in an interview with Bellona Web that "there is nothing out of the ordinary going on here."

"The ship simply needs a rest. Organizational activities have to be conducted," he said, adding that he had no other official commentary as Kuroyedov had just recently issued his statement.

The ship itself had last year been declared the "flagship" of the Russian navy, meaning naval officials considered it to be the best built ship with the best crew in the Russian navy. Its recent performance in the "Safety 2004" naval exercises last month—which as a whole were marred by two missile misfirings from submarines—turned in an irreproachable performance, according to naval officials.

Kuroyedov’s Wednesday announcements therefore came as a shock to the naval and the environmental community, and opened up speculation that his order that the ship be returned to port was a political intrigue among naval brass involved in the sinking of the K-159 submarine in August 2003.

According to Novaya Gazeta, a Russian investigative weekly, Kuroyedov’s ultimate target is not the ‘Peter the Great,’ but rather the uncle of its commander, admiral Igor Kasatanov. The ‘Peter the Great’ is commanded by Vladimir Kasatanov, and his uncle has been involved in offering expert testimony in the case of the sinking of the K-159 last August, which killed 9 of the ten crew members aboard when tow line snapped in heavy weather.

Military prosecutors charged Admiral Gennady Suchkov with dereliction of duty when he allowed the K-159 to leave port, despite predictions of heavy weather. Admiral Kasatonov, according to Novaya Gazeta, has been offering testimony that does not implicate Suchkov as the responsible party in the accident as Kuroyedov would like. This could lead to possible implications of responsibility for Kuroyedov in the K-159 sinking.

According to Novaya Gazeta’s version, Kuroyedov has therefore returned Admiral Kasatanov’s ship to port as a sort of blackmail or revenge scheme to ensure that Kasatanov does not implicate the naval commander-in-chief in the sinking of the K-159.