Though Norway is doing much to improve the ecological situation in Northwest Russia by dismantling two submarines, the country’s money was spent on the same unsafe sub transportation methods that sank the K-159.

Published on September 2, 2003 by Igor Kudrik 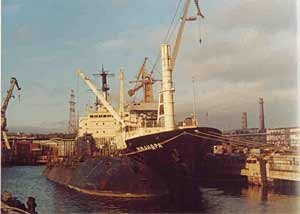 Russia has recently been pledged a windfall of approximately $200m in international funding for nuclear remediation projects in Russias Northwest, with countries such as Norway, Great Britain, and France either donating to multinational funds for Russian nuclear cleanup or by contracting directly with Russia to dismantle its derelict retired submarines.

But, as last weekends sinking of the K-159 during transport from the Gremikha naval base to a dismantling point at the Polyarny naval shipyard shows, none of these huge international donations will have their intended impact on nuclear safety unless these donor nations conduct their own independent risk assessments of each project they donate money for.

What happens is that investors are basically contributing to catastrophes and accidents like this, said Alexander Nikitin, chairman of the Bellona Foundations St. Petersburg branch and a renowned environmentalist. This accident illustrates such negligence. It also shows that this kind of incident can happen not only in towing, but also in dismantlement, defuelling, construction financed by donor countries. They give funds without thinking, just taking the Russians at their word.

The transportation of the K-159, which sank in 240 metres of murky and frigid water in the Barents Sea five kilometres northwest of Kildin Island, in the early morning hours of Saturday—killing nine of the 10 crew members who were inexplicably aboard the submarine—was not funded by western donors. But the towing of two Victor class submarines—a practice that was in the aftermath of the K-159 tragedy suspended indefinitely by the Russian Ministry of Defence—from the Gremikha base to dismantlement points at the Zvyozdochka, near the Arkhangelsk region city of Severodvinsk, and Nerpa, a few kilometres west of the Polyarny on the Kola Peninsula—was funded by the Norwegian government.

It was good fortune for the Norwegian Ministry of Foreign Affairs that the two submarines—which, according to Norwegian Ambassador Torbjörn Norendal, were in good enough shape to be towed without the standard aid of pontoons—arrived at their destinations safely. Had there been any mishaps—the risks of which are innumerable in any submarine towing operation—Norway would be the country to have borne the specific blame for financing the submarines sinking.

Put simply, it was not bad luck that sank the K-159—but it was good luck that got the Norwegian-financed Victor class submarines towing operations through.

The Scale of the Problem
Of the 191 retired nuclear submarines in Russia, 115 are located at the Northern Fleet bases and shipyards. Of those, around 70 still have spent fuel, or SNF, on board. Approximately a mere 40 have been fully dismantled. SNF from more than 100 reactors is in storage at onshore bases and in nuclear service ships in Northwest Russia, and some 130 reactor cores are still on board retired submarines.

The United States, through the Cooperative Threat Reduction programme, or CTR, has focused over the past 12 years of the programmes existence on the dismantlement of newer strategic submarines that used to pose a threat to US national security. While this is a laudable and necessary effort to rid Northern Fleet shipyards of dangerous and contaminating vessels, US congressional limitations to strategic subs has orphaned the older, more corroded non-strategic submarines which pose the lions share of environmental and non-proliferation risks. These submarines must be taken out of the water and dismantled as soon as possible.

Donors Must Monitor Dismantlement Procedures More Closely
Retired rusting hulks of submarines like the K-159 are indeed an urgency. But it is equally important to ensure that donor nations exercise greater control over the dismantling projects that their funding grants for nuclear remediation in Russia facilitate.

Western donors cannot simply give financial support without reviewing each stage of the process they are funding—for example the process of dismantling a nuclear submarine. Otherwise, funding coming into Russia for nuclear radiation safety projects may have the opposite effect. Donor countries must insist on reviewing the projects they are funding from the point of view of the hazards they could cause.

Whether this lack of project oversight comes from the donors naivete or their unwillingness to delve into Russias infamous bureaucracy, such neglect can have dramatic effects. According to Nikitin, if international donors pay for operations that lead to such consequences as the K-159 sinking, then it would be better if they didnt give any money at all.

They shouldnt give money without assessment or consultations or getting expert analysis from all sides—just because they were asked for money by the government or the navy, said Nikitin, a former naval captain first class. Before they contribute, they have to count the opinions of the recipients, their own and of a third expert and independent party.

Norway, for instance, was basically trapped when it paid for the dismantlement—and particularly the dangerous towing—of the vessels, because it had not properly investigated the contract from the point of view of safe submarine destruction procedures. The money was simply transferred to the concerned shipyards that hire various contractors to carry out various aspects of the work—something that Ambassador Norendal pointed out was a Russian matter.

Without any safeguards enforced by donor nations themselves—to take matters to the opposite extreme—it may indeed be safer not to give any money to Russia at all and let the subs rot where they float.

In the case of the K-159, for instance, it would have been safer for both Norway and Russia if it had just been left at Gremikha. Now, lying at a depth of 240 meters, with a cold reactor that will not withstand the incredible water pressure for long, and whose control rods—which prevent the reactor from restarting a chain reaction—are in unknown condition, it is yet another incident of radioactive contamination waiting to happen. Granted, this accident is completely on Russias conscience, but donor nations run the same risks by not partaking in supervision.

As a result of a 2002 government audit of Norways nuclear remediation commitments in Russia that said Oslo was failing to complete its projects in time, Bellona was invited to present a paper to the Norwegian Parliament’s Control and Constitutional Committee.

The Bellona paper described ways of optimising nuclear safety and security projects with the Russian Federation. These recommendations were forwarded by the committee to the Norwegian Foreign Ministry. Among other things, the list demanded that the Foreign Ministry conduct a risk assessment of each nuclear remediation project Norway finances in Russia. However, such assessments, including the case of the Victor submarine dismantlement project, have never been carried out.

Other Countries’ Efforts Lead to Unsafe Results
Norway is not the only country having problem maintaining safety oversight in nuclear cleanup projects in Russia.

There are other examples wherein western countries have spent money on such projects when the results amounted to nil because they failed to carry out safety and feasibility evaluations before signing the checks. For instance, a group of western donors were commissioned to build a liquid radioactive waste processing facility at the civilian nuclear icebreaker base in Murmansk, belonging to the Russian nuclear icebreaker operator Atomflot. The project was started five years ago, but because of severe and costly design flaws, when the facility will open is anyones guess.

Another instance was CTRs attempts at core conversions in the plutonium reactors at Seversk and Zheleznogorsk. The project would have converted Russias three remaining weapons-grade plutonium producing reactors—which also provide heat and electricity to the communities in which they stand—into less hazardous civilian reactors. But years and several million dollars after the project began, it became apparent that it was unsafe and unfeasible on many different levels.

The programme was then turned over to the US Department of Energy, which was given the task of simply decommissioning the reactors, and building fossil fuel plants to make up for the heat and electricity deficits that will come with the reactors shutdown. The plan will eradicate from Russian stockpiles the annual addition of 1,500 kilograms of weapons-grade plutonium these reactors are collectively producing every year for no apparent use. But feasibility and safety studies carried out prior to the core conversion fiasco would have saved millions of dollars and spared tonnes of terrorist-luring weapons-grade plutonium—which is stored on site in Seversk and Zheleznogorsk—from being produced.

The Bellona Foundation will be filing a new paper with a reiteration of its demands to the Norwegian Control and Constitutional Committee. Meanwhile, Bellonas Russian offices are studying possibilities of bringing legal action against the Russian authorities that have been authorising the towing of the Russian Navys submarines in such an unsafe manner.