A Bellona-commissioned independent investigation of potential radioactive contamination in the area where the rusted and leaky K-159 Russian submarine sank on August 30th in 240 metres of water, while being towed to the Polyarny decommissioning point from the Gremikha naval base, reveals publicly for the first time that sea-based radiation levels are, so far, normal.

Published on September 10, 2003 by Charles Digges 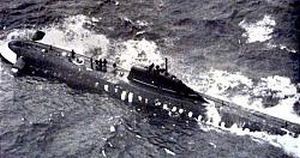 
This does not, however, rule out a present or future leak in the two reactor compartments of the K-159, whose sinking killed nine of 10 crew members who were aboard the towed submarine when it sank. It also does not rule out the possibility of the leak travelling west of the wreckage given the Barents complicated current patterns.


Despite the assurances by the Russian government&#151which says it has taken its own measurements that they say are normal&#151that there is no contamination hazard from the sunken reactors, higher levels of radiation could well have travelled east with the current and farther away from the area where the samples were taken. They were taken on the fishing grounds used by the company Norway Seafoods, at the border with Russias Kola Peninsula.


Nils Bøhmer, a nuclear physicist with Bellona, said the difference in measurements is not at all significant and cannot be considered an increase in radiation levels. It is most probably due to a variance in measurement methods.


Becquerel levels between 0.2 and 0.25 are considered safe measurements. Above 1.0, said Bøhmer, would be considered higher than natural background radiation. Bellona expects further analyses of catches hauled in by Norway Seafoods the day following the submarines sinking later this week.

The Russian government has repeatedly asserted for the past two weeks that the reactor compartments of the sunken vessel are safe from contaminating surrounding waters, and the information obtained independently by Bellona&#151as well as that obtained by the official Norwegian Radiation Protection Authority, or NRPA&#151would, for the moment, seem to confirm that.


According to Per Strand, the director of the NRPA, his organisation began to take samples of their own almost as soon as they were notified that the K-159 had gone under.


Strand said in a telephone interview with Bellona Web that fishing vessels in the area were immediately ordered to start taking measurements from various areas and were directed to get as close as possible to the area where the K-159 went down&#151roughly the same distance from which Bellonas measurements were taken. Strand said the figures ranged from 0.15 to 0.1 Becquerels in the open sea, and that they have been passed on to the relevant authorities. But they have not been officially publicised.


Our measurements show no indication at all of a [radiation] leakage, said Strand, but we were not in the area of the sinking.


Strand said the fishing vessels supplying the NRPAs measurements returned late last week. He did not indicate whether the NRPA was planning to take further measurements.

In 1989, the submarine was decommissioned and the control rods of its reactors were welded into a lower position to prevent it from restarting. It had last been refuelled in 1972.


But how solidly these control rods were set in place&#151and how their positioning endured the impact with the seafloor&#151remain unknown, as the Russian Navys Northern Fleet command will not comment. Similarly, responsible officials at Gremikha, where these safety measures would have taken place, have been unavailable for comment.


When the K-159 sank, it brought down with it two VMA-type reactors, each with a thermal capacity of 70 megawatts. The reactor cores of these reactors contain approximately 800 kilograms of spent nuclear fuel with the radioactivity of 750 curies per kilogram. The deeply corroded hull of the sub, plus the crushing pressure of 240 metres of water, means, according to experts, that a leak will happen sooner or later.


Another risk factor for the reactors giving in to a leak is the long period for which the reactors lay dormant after decommissioning. Had there been more heat&#151which builds up during nuclear reactions&#151in the reactors of the K-159, it would have better been able to withstand water pressure.


This is unlike the reactor of the Kursk, an Oscar II class submarine, which sank after a torpedo explosion in August 2000, killing all 118 aboard. The Kursks reactors posed relatively little danger of leaking because of the heat built up in them. Additionally, the submarine, which has been partially raised with the help of a Dutch consortium for a cost of $65m, lay at a depth of 108 metres&#151less than half the depth of the K-159.


The Russian Navy says it will salvage the K-159, but the navys chief of staff said it was unlikely to happen before May of 2004. Such an undertaking would be a complex and expensive endeavour, given the depth at which the vessel is and the prevailing stormy conditions on the Barents Sea. It would be imperative in such an operation, to avoid risks of further contamination, that the reactors be lifted safely so as they do not endure another drop to the seafloor, which could add to the contamination they may be spreading.


Bellona has stated its position that Russia should thoroughly investigate different technical solutions for lifting the K-159 from the sea bottom in order to safely dismantle the submarine. If this research reveals that raising the K-159 would be too complex and unsafe an operation, every effort should be made to secure the spent nuclear fuel in the two reactors on the sea bottom. One possibility is to build a sarcophagus around the reactors to minimise the risk of contamination.

Many analysts agree that the Kremlin has been much more forthright in its comments on the situation than it was during the almost total media shutout, bureaucratic lassitude, and lack of commentary from naval officials and the Kremlin, when Kursk went down.


But despite the fact that Minister of Defence Sergei Ivanov and Military Prosecutor General Alexander Savenkov were dispatched immediately to Northern Fleets Command at Severomorsk to meet with relatives of the victims and assign blame for the accident, the Russian habit of misreporting facts persists, and what exactly happened to the K-159 is still unclear.


At first, the supreme naval command said the vessel had sunk during a storm at 4 a.m. Moscow time at a depth of 170 metres. The next day, the Northern Fleet reported that at 2:20 a.m. already the crew of 10 on board had been ordered to abandon ship and that it went down at 3 a.m.


There were further reports that the K-159 may have sunk at 2 a.m. or even earlier. The wreck was actually found on the seabed at a depth of 238 meters.


The chief of the naval press service, Igor Dygalo, told reporters that the K-159 had gone down in a storm that severed the cables of the four large pontoons that helped keep the sub buoyant. But weather records, according to Moscows Meteorological Institute, show that there was no storm in the area that night, a representative from the institute told Bellona Web.


Another November class submarine was being towed from Gremikha at the same time as the K-159 and made the journey without mishaps, the navy said.

Furthermore, the Russian daily Kommersant reported late last week that the K-159 had gone down as the result of a leak that had sprung in the vessels stern. Neither the navy nor the Military Prosecutor Generals Office&#151which is investigating the accident&#151would comment on the papers report.


It is also now in question, after Bellona Webs interviews with Russias Ministry of Atomic Energy, or Minatom, spokesman Nikolai Shingaryov, which submarine dismantlement base these two submarines were headed. Although Minatom does not have oversight of the dismantlement process, it bears the responsibility of handling decommissioned submarines spent nuclear fuel.


This would make sense, as the remaining shipyards on the Kola Peninsula are the responsibility of the Russian Shipbuilding Agency&#151which does not answer to any of these ministries&#151therefore, dismantling the subs at the Defence Ministrys Polyarny would have meant allocating significant funds to the cash-strapped navy’s budget.


On the day of the accident, Nerpa officials told Bellona Web that the K-159 was headed for Polyarny. But Shingaryov, in his later interview, insisted that both November class subs were headed to the Shipbuilding Agency-run Nerpa shipyard, a few kilometres north of Polyarny. After Minatom released a press statement repeating Shingaryov’s assertion, Nerpa officials refused to answer questions about where the K-159 was headed.


The bodies of Gurov and Smirnov were recovered shortly after the accident. But the bodies of the seven remaining crew members are presumed to still be trapped inside the boat. With the exception of Defence Minister Ivanov, Tsibulsky has not been permitted any visitors.


According to reports late last week on the Prague-based Radio Liberty, Tsibulsky remains in a state of psychological shock. Radio Liberty also reported that high alcohol levels had been measured in Tsibulskys blood. The same was revealed in an examination of the bodies of Gurov and Smirnov.


However, according to Kommersant, which was citing sources within the Northern Fleet, the crew died as heroes, struggling to plug a leak in the submarines stern. Backing the Kommersant report of a leak was Anatoly Stavropoltsev, deputy commander of the Gremikha bases submarine unit, who said in an interview with NTV television last week that the crew was fighting to stay afloat until the very last moment.


The Defence Ministry, however, is still holding to its storm scenario, saying that a leak could not have been a leading factor in the tragedy.

Even if there had been a leak […] the four pontoons should have kept the K-159 afloat, a Defence Ministry official was quoted by the Russian Interfax news agency as saying late last week.


Given the decrepit shape of the sub, it is possible, suggested some analysts, that the unusually large crew on the K-159 was there precisely to keep the vessel afloat in case it started to leak.

Military Prosecutor General Savenkov announced last Wednesday that charges had been brought against Sergei Zhemchuzhnov, who was the commander of the Gremikha base and in charge of preparing the K-159 for the journey. Zhemchuzhnov was also reportedly aboard the tugboat that was towing it.

According to Savenkov, Zhemchuzhnov was charged with violating marine navigation laws. Savenkov did not elaborate. However, the actual order to transfer the ship would have come from higher ranks in the Northern Fleet command.


The question also remains if Zhemchuzhnov, in fact, would have been responsible for the death of nine crewmen aboard. The Northern Fleet declined to comment on why there was such a high-ranking and large crew aboard the vessel in the first place.


In some cases, when decommissioned subs are towed to dismantlement, noted the K-159s last commander, Admiral Eduard Baltin, in an interview with NTV, a crew of three or four sailors would be stationed on the deck to monitor the integrity of the pontoons.


Decommissioned vessels, while in port, maintain a skeleton crew, but the fact that such a large crew would remain on board while the K-159 was being towed to a dismantlement point is an anomaly, Baltin said, adding that when the boat had been finally decommissioned in 1989, it had literally sunk at dockside and had to be kept afloat with special aid from then on.


How it was kept afloat, Baltin did not know. Around 1998, the navy abandoned the practice of keeping decommissioned subs afloat with air compressors, electing instead to fill the ballast tanks of some subs with foam. It is unknown, however, how many of these subs are kept afloat in this manner.


Rashid Alimov in St. Petersburg, and Hanne Bakke in Oslo, contributed to this report.