Kursk to be placed in dock on October 13th

This night the Giant-4 barge approached the Kola Bay. However, the Northern fleet commandership due to safety precautions decided to proceed with the transportation at 8 a.m.

Published on October 10, 2001 by Viktor Khabarov 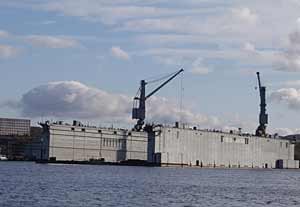 The traffic is banned in the Kola Bay when the barge with the Kursk was to enter the area. The barge is expected to arrive at Roslyakovo at around 1 p.m. After that the barge will be stationed in the harbour and prepared for docking.

Before the docking the radiation monitoring will take place on the submarine. This operation will last until 11 p.m. today.

According to the Northern Fleet commander-in-chief admiral Vyacheslav Popov, the docking of the barge Giant-4 with the Kursk will take 2 days provided the weather is good. Expected start of the docking is 4 p.m. on October the 13th. Exactly at this time high tide is expected.

However, the first torpedo compartment will be guarded as long as it is at the seabed. The raising of the first compartment is planned for the next year. Russians will do the bulk part of the job, foreigners will be likely engaged as well, Vyacheslav Popov said. The need for the foreign companies will depend on how the project to lift the first compartment and its fragments, is structured.

Deputy chief of the investigation department of the General Prosecutor’s Office, Andrey Mayorov, said that the group is ready to carry out investigation procedure, i.e. full examination of all the submarine compartments and the hull. It is decided to engage various experts in the investigation: medical experts, explosion and fire specialists – all together more than 10 experts in various areas.

"Nobody will enter the submarine before the Military prosecutor’s investigators," admiral Popov said.

"The first stage of our work is searching and evacuation of the bodies. That is why it is logically to examine the 9th compartment, where we expect to find 11 bodies of the Kursk crewmembers," Andrey Mayorov, said.