The head of the Rubin design bureau said that a practice torpedo explosion sank Kursk. The designers of the submarine are considering what to do with the reactors before the winter frost sets in and how to unload the cruise missiles. 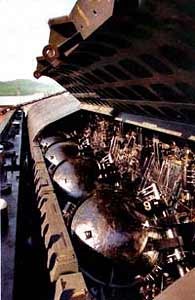 “It is now clear that it is impossible to raise Kursk’s first compartment from the seabed in its current condition”, the head of the design bureau Rubin, Igor Spassky, said in an interview with Vecherny Murmansk daily.


“After a preliminary examination of the compartment, the bow part and the torpedo tubes, it was decided to raise only the parts that may indicate an answer to the question why the accident happened. We estimate that it will be more than 15 fragments. I would like to stress that the preparation for this operation will start before Kursk is placed in the dock. We addressed Mammoet with a request to wash out the sediments around the first compartment. They have very effective equipment which can help to clean the “battlefield” after Kursk is lifted.”


“A crane ship will be engaged in such works. Of course, robots and special cutting equipment, which is being purchased, will be used. We assume that the Russian navy can do the whole job themselves with our assistance in the summer of 2002,” Mr Spassky said.


The deputy premier, Ilya Klebanov, said that this operation will be conditioned by two factors: security of navigation and fishing in this area, and coming closer to the cause of the accident.


Torpedo exploded on Kursk
“It is now confirmed that the torpedo explosion was ignited by the practice torpedo exploding in the torpedo tube,” Igor Spassky said to Vecherny Murmansk. “A very complicated physico-chemical process developed with ejection of atomic oxygen with kerosene into the compartment, which resulted in increased pressure and temperature and a further detonation of the ammunition. It is still unclear what led to the first explosion: whether it was some external impact or a torpedo failure. I can say with all responsibility that we have learned all we could learn from the indirect evidences, and we will keep learning more,” the head of the Design bureau Rubin said.


Recently a considerable group of our experts on missile weaponry were onboard the Orel submarine of the Kursk type. According to Spassky, the experts found the necessary technical solutions to unload the 24 cruise missiles, 22 of which are armed with conventional warheads.