Kursk may arrive in Murmansk on October 10th

The lifting of the submarine started at around midnight on October 8th. At 2:40 a.m. the hydro acoustics onboard the nuclear powered cruiser Peter the Great detected the noise indicating that the torpedo section of the submarine was separating from the rest of the hull.

Published on October 8, 2001 by Viktor Khabarov 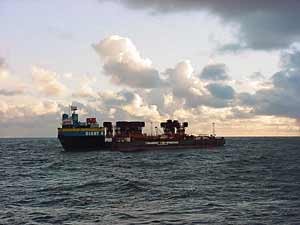 
On its way up, the divers spent a couple of 10 minutes breaks to survey whether the grappling devices were properly inserted.


At midday today, the Giant-4 barge pulled its anchors and turned its bow part against the wind. Then it set towards the Kola Bay with Kursk underneath. Kursk is tugged with its bow forward.


The barge started on its route before the superstructure of the Kursk was fastened beneath its deck, as was originally planned. The speed was not more than one knot per hour.


The original plans suggested that Kursk should be fastened before the barge could start moving. But, apparently, to be on the safe side with regards to weather, it was decided to pull Kursk on the way to the Kola Bay. In case of a storm, the barge could hide in one of the fjords along the north-eastern coast of the Kola Peninsula.


Today at 6 p.m. local time, Giant-4 with Kursk underneath stopped moving. The detailed examination of the submarine will be conducted during 2.5 hours before the final fastening to the barge, which is scheduled for 7 p.m.


Two divers will install a protective mesh across Kursk’s hull where the forward compartment was severed from the rest of the hull. This was done, as officials said, to stop pieces of equipment from washing out of the second compartment and consequently waste clues for the further investigation into the cause of the accident. Afterwards both vessels in tandem will head for the Kola Bay. The speed will be 3 knots per hour (5 km/h). The transportation route goes directly to the Kola Bay, as long as the weather conditions are favourable. Approximate arrival time of Giant-4 and Kursk at Roslyakovo is 12 noon on October 10th.


At 6 p.m. local time Kursk was 15 meters from the barge bottom. The vessels are 7-8 miles away from the original location of Kursk.


The Mayo ship will remain in the area of the Kursk accident to collect additional parts of the submarine.


Vice admiral Mikhail Motsak, the head of the rescue expedition, said that it would take about one and a half day to reach the Kola Bay shipyard in Roslyakovo. So, the submarine may arrive at the shipyard on Wednesday afternoon. He also said that the contract with Mammoet will be considered concluded when Kursk is placed in the dock.


Officials say the monitoring of radiation is conducted on regular bases and no abnormalities were detected so far.


When the barge with the submarine enters the Kola Bay, all traffic will be banned. It will take the barge around six hours from entering the Kola Bay to reach the shipyard.


When Kursk is placed into the dry dock, the condition of the two reactor installations will be verified and the 22 cruise missiles with conventional warheads will be removed. Everything indicates that the reactors are shut down. The only thing that may happen is that the seawater, which was in touch with primary circuits, is contaminated. But earlier it was reported that the dry dock is equipped with water collectors.


The most dangerous part of the operation will be the unloading of the missiles. Officials confirm that the two forward missile tubes are damaged.


Kursk will spend the winter in the dry dock. Then the plan is to seal it off, making the ship seaworthy, and tow the submarine to the Nerpa shipyard in order to defuel its reactors, and finally decommission the ship. The defuelling will also be performed in a dry dock. Nerpa had no such experience before. All the submarines, which were defuelled at the shipyard were afloat. But the management of the shipyard says they will manage the operation without major difficulties.


The only concern is the price tag for the defuelling and decommissioning which comes in addition to the expenses of the lifting operation itself. The Russian Ministry for Nuclear Energy, now responsible for defuelling and decommissioning of the retired nuclear submarines, has already voiced its concern that Kursk will be scrapped at the expense of other laid up submarines, which have been awaiting their turn to be decommissioned for more than 15 years.