The Kursk crew recovery operation is over, but the Russian officials still can not say what caused the disaster. The time line of the accident is taking shape.

Published on November 8, 2000 by Igor Kudrik 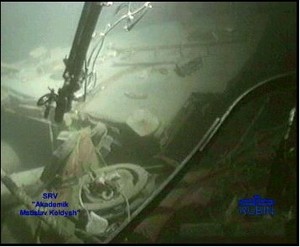 Russian nuclear-powered Oscar-II class cruise missile submarine the Kursk sank on August 12. The position of the submarine is 69’40 N, 37’35 E, just outside the cost of the Kola Peninsula east of Murmansk.

The same day, the Northern Fleet completed the military exercise that started on August 9-10 and involved around 30 submarines and surface vessels, as well as aviation.

On August 12, submarines, taking part in the training, were to carry out a torpedo attack against a group of combat ships, which acted as the ‘opponent’. The group was under command of the nuclear powered cruiser Peter the Great that was also the main target for the submarines. The ships had orders to follow the south-east course. The attacking submarines were in ‘ambush’ along the course. Kursk was one of the submarines to attack the group being on the alert in its designated area (15×20 miles in size).

Having assumed the region assigned, the Kursk sent a radio message to onshore. This report was the last communication between the operation centre of the Northern Fleet and the Kursk. Commander of the Northern Fleet, Admiral Vyacheslav Popov, said this contact took place at 8:51 a.m. Moscow time on August 12th.

According to the training schedule, the Kursk was to attack the opponent firing two practice torpedoes from 11:30 to 18:00 Moscow time.

Having reported to the operation centre, the submarine conducted additional surveillance of the designated area moving first to its southern boarder and then back to the north-western part.

Kursk went up to the periscope depth of 19 meters to find the ‘opponent’ ships, which were to enter the area, at around 11:00. The submarine slowed down to about 8 knots, extended its periscope, antennas, as well as, most probably, the device for air intake to fill the high-pressure air tanks. The available data say that at that time the ‘opponent’ was manoeuvring approximately 30 miles to north-west from the area where the Kursk was on guard. Kursk, playing the rules of this hypothetical combat mission, could not attack the opponent before they entered the area the submarine was responsible for.

For the next 2 minutes and 15 seconds, sonar data from the two US submarines, which were monitoring the training, showed what appeared to be cavitation, or propellers going through water, Washington Post, referring to a US Navy officer, reported last week. The officer said there was also the sound of machinery working and ballast tanks being blown in an effort to bring the submarine to surface.

The most powerful explosion documented at 07:30:42 GMT (11:30:42 Moscow time) had 3,5 points on Richter scale, ranging between one tonne to two tonnes TNT detonated underwater.

Then, according to Washington Post, the only sound detected was the creaking of the hull as it headed for the bottom. At 240 seconds after the first blast, the sub was heard hitting the seabed with a crash.

What triggered off the explosions?
This question has still no clear answer. Russian officials suggest that it could be a collision with a foreign submarine, a mine from the second world war, or an emergency situation in the submarines torpedo compartment. Unofficial sources say that the Kursk could be hit by a torpedo-missile launched from the cruiser Peter the Great.

Which of the torpedoes exploded first triggering the more powerful second explosion or whether it was a torpedo at all is still hard to say.

65-76 torpedo (65cm / 11m) designed in 1976. The 65-76-torpedo propulsion is based on reaction of concentrated hydrogen peroxide with water. The reactions output, hydrogen, is pushed under pressure to turbine. Hydrogen peroxide is contained in a metal tank inside the torpedo. If a fire heats the hull of the torpedo, the peroxide starts boiling and explodes. Experts believe that it takes two minutes for the torpedo to heat up enough for an explosion. This data is available from test results. The tests were conducted earlier so the crew could know how much time they have in case a fire breaks out in the torpedo section.

Shkval class torpedo (53cm / 8m) was taken in use in 1977. Shkval torpedoes are launched with a help of a trigger that produces gas, shooting the torpedo out at a very high acceleration. This encapsulates the torpedo in a gas cavern, easing the water resistance and allowing it to go at a speed of up to 200 knots (normal torpedo speed is between 40 knots and 50 knots). It is believed that the two representatives from Dagdizel, which were onboard the Kursk, were testing a modification of Shkvals propulsion.

Russian military daily, Red Star, published an article in August saying that the Kursk was refitted at Sevmash shipyard in Severodvinsk in 1998 to carry upgraded torpedoes. The newspaper does not say directly whether these were Shkval class torpedoes, but the description placed in the article fits Shkvals characteristics. The newspaper reported that the Navy was against the new torpedoes, saying that they were difficult to store and dangerous to handle. These protests did not help much, however.

Onboard Kursk
During the operation to recover bodies of crewmen trapped in the Kursk wreck, a note was found in the pocket of one of the sailors on October 26. The note proved that the crew survived the two blasts. The navy officials said that the note was written between 13:34 and 15:15 on August 12th. The revealed part of the note said that most of the crew (23 men) from compartments 6, 7 and 8 moved to compartment 9 at 12:58. It also said that two or three men would try to use the rescue hatch in compartment 9 to escape. Unofficial reports suggest that the last entry was made on August 15th.

Failed rescue operation
In an interview with Northern Fleets daily Na Strazhe Zapolyarya head of the rescue service of the Northern Fleet, Alexander Teslenko, described the following sequence of events.

The Kursk submarine was to attack a group of surface vessels from 11:30 to 18:00 Moscow time using practice torpedoes. No report of the attack being carried out was received from the Kursk, however. According to the schedule, the submarine was to surface and report that it was leaving its area of exercise at 23:00 Moscow time on August 12th.

But the understanding that something went wrong with the Kursk came before 23:00. The rescue operations chief was called in at 17:00.

The tugboat was near Kildin Island and was sent to the area of the exercise at 18:31 and arrived at the place at 22:30.

The Kursk did not take contact at 23:00. Teslenko arrived onboard Rudnitsky and the vessel left Severomorsk, the home base of the Northern Fleet, in the night from August 12th to August 13th.

At 08:39, Rudnitsky reached the boarder of the exercise field cut for the Kursk and started searching for the submarine.

At 12:05, Rudnitsky anchored and began to monitor the area for radio signals from the Kursk. The vessel also tried to establish verbal radio contact with the Kursk crew.

At 15:30, the vessel started preparation of AS-34 (Briz) submersible. While doing so, Rudnitsky moved to the most likely point of the Kursk location. At 16:15, AS-34 was put on water. At 16:20, the automatic acoustic station onboard the Kursk responded to the probe sent from Rudnitsky. At 17:48, AS-34 caught the radio contact as well and started to approach. The signal coming from the Kursk was not too spread to establish the precise location of the submarine.

At 18:32, AS-34 had to surface having suffered an emergency. The submersible likely collided with a steering wing of the Kursk while being underwater. After AS-34 had surfaced and was lifted onboard, Rudnitsky was capable of finding the precise co-ordinates of the submarine and moved to that area. The location of the Kursk was established in 6 hours and 27 minutes after the search party had dispatched, according the Teslenko.

From August 13th to August 14th, from 22:40 and until 01:05, another submersible, AS-32, was sent several times down to the Kursk, but it failed to establish even a visual contact with the submarine.

At 04:00 on August 14th, the batteries ran out at AS-34. The regular loading time is 13-14 hours. But they were recharged hastily and the submersible was down at the Kursk from 04:55 and until 07:48. The submersible tried to mate with the rescue hatch in the stern of the Kursk but did not succeed.

AS-36 dived again but suffered an accident when one of the valves, which regulates the trim, developed a leakage. The submersible had to rest on the seabed for a while and then to go up in emergency. The submersible almost sank when it was on the surface, but one of the cranes managed to grab it.

AS-36 was eventually taken onboard and repaired. It dived several times after but failed to dock on the Kursks rescue hatch.

The floating crane was incapable of working in the sea gale; while Rudnitsky, which was reconstructed to carry AS-34 submersible from a lumber carrier, could not provide safe loading and unloading of the submersible. AS-34 swinging wildly when raised from water was hitting the board of the ship and received damages. According to Teslenko, echo sounder, sonar and other equipment were damaged as a result of the collisions during loading and unloading.

Teslenko said that all in all Briz and Bester made 14 attempts to dock with the Kursk. None of them was successful.

Norwegian divers opened the rescue hatch in the stern of the submarine on August 28th – the day after they arrived. The submarines compartments were flooded with water by that time.