Vis menyen
Bellona.org > Latest News > Nuclear issues > Accidents and incidents > What can be done with the Kursk submarine?

What can be done with the Kursk submarine?

As the tragedy is a fact, there are no survivors onboard the sunken submarine Kursk, one question arises: what to do with the submarine and its two nuclear reactors? The Russian Deputy Prime Minister, Ilja Klebanov, has already asked for international assistance to raise the wreck. Bellona recommends “we should hurry, but not rush,” and wait with a decision until a comprehensive risk assessment is conducted. 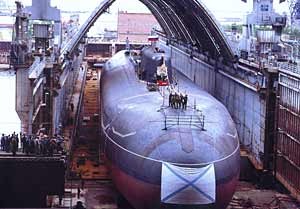 Kursk lays on the seabed, at a depth of 108 meters north-east of Murmansk in the Barents Sea, a sea which is one of the most important fishing areas for both Russia and Western Europe. Just some few tens of kilometers to the west is the famous fishing ground Kildinbanken.


The reactor section of the submarine is flooded with water, so some of the barriers between the seawater and the radioactivity in the reactors are damaged. So far, there is no information about the damages inside the reactor compartment, the compartment is located behind the tower of the submarine. The explosion that hit Kursk might very well have made severe damages to the reactors themselves, the cooling pipelines in the first circuit, or to other important parts of reactor installation.


A comprehensive analysis of the wreck, and a proper risk assessment may take several months. Judging on the way Russian officials have handled the rescue operation so far, presenting misleading facts and keeping information secret, Bellona recommends that the risk assessment must be done in a cooperation with a civilian institution in Russia and international experts.

–>
Lifting Kursk from the seabed

To start a lifting operation before all necessary facts on the wreck’s condition are established might very well increase the danger of radioactivity discharge to the marine environment. So far, there are no reports about leakage outside the hull of the submarine.


Therefor, Bellona highly recommends that before any decisions on what to do with Kursk is taken, thorough investigations of the wreck have to be performed. First of all, to find out how much the hull structure is damaged but also to clarify the technical condition of the two nuclear reactors. If the technical condition is good enough it could be possible to raise the submarine. In any case such an operation will require international assistance, since Russia has neither required equipment nor experience in this field.


Russian Navy officials have said they are considering to partly lift Kursk and thug it to more shallow waters (less than 60 meters deep) so Russian divers could do an attempt to take out the victims onboard. In respect to the families of the crewmembers, all rescue attempts must of course include the possibilities to bring out the victims.


Should the research conclude that it is safe to raise the submarine, such operation can be done either by using floating cranes in a combination with air-balloons or one of the two methods.


Second question is, of course, what to do with the submarine after it is lifted? It might be taken into a floating dry-dock and then shipped to coastal areas at Kola, like the naval yards outside Murmansk or to Severodvinsk shipyards in the White Sea. To prepare a damaged submarine for decommissioning must of course include a safe plan for taking out spent fuel elements in the reactor cores and a safe storage for the reactor compartment. Such storage site does not exist today, and Bellona underlines that bringing the submarine into a naval yard can pose a radiation threat to the shipyard’s workers, if we are not 100 percent sure everything is ok inside the reactor compartment.

Leave the Kursk on the seabed

If the investigation and risk assessment studies conclude that it will be impossible or to risky to lift the submarine from the seabed, there are several options of leaving the Kursk on the seabed in the Barents Sea.

One of these options could be to try to cut out the reactor compartment of the submarine and raise it to the surface. The cutting operation would require special equipment, and it is doubtful that Russia has such equipment. Secondly, such large cutting of superstructure steel at 108 meters depth in the Arctic waters has never been done before.


Even if lifting of reactor compartment is successful, the nuclear cores of Kursk have to be stored in a safe way. At present, all the Russia’s on-shore storage sites for spent nuclear fuel are filled up.


Another option is to leave the submarine with its two reactors on the sea bottom. In that case, it could be possible to seal off the reactor compartments to minimize the risk of leakages. Russia has developed a special material to seal off naval reactor sections, which was used at the dumped reactors in the Kara Sea. Russian specialists claim that this material provides a sealing of reactor compartments for 500 year.


At the Komsomolets submarine at 1685 meters depth in the Norwegian Sea some of the openings in the hull was partly sealed off with metal lids to stop the water penetration and washout of plutonium. Most likely the final solution would require a combination of these two sealing methods.


The last option would be to build a sarcophagus around the submarine, like it was done with the Chernobyl reactor. The sarcophagus would much likely to be built in concrete, but other materials might also be used. This solution is probably not a very good one, since the experience from Chernobyl showed leakages after only 10 years. Secondly, such option will make it even more problematic and expensive to do something with the submarine and/or its two reactors if coming generations develop new methods and want to raise the wreak.