Shelling at the Zaporizhzhia nuclear plant in Ukraine has international monitors “gravely concerned” and a protected security zone surrounding it should be established immediately, the United Nations nuclear watchdog agency said in a report released Tuesday after its visit to the embattled complex.

Published on September 6, 2022 by Charles Digges 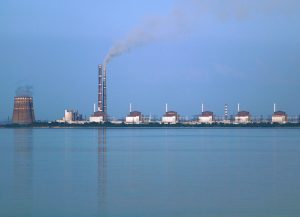 Shelling at the Zaporizhzhia nuclear plant in Ukraine has international monitors “gravely concerned” and a protected security zone surrounding it should be established immediately, the United Nations nuclear watchdog agency said in a report released Tuesday after its visit to the embattled complex.

But the experts from the International Atomic Energy Agency said the fighting has not yet triggered a nuclear emergency at the southeastern Ukrainian plant — Europe’s largest — which has become a central flashpoint in the ongoing Russian invasion that began in February.

“There is an urgent need for interim measures to prevent a nuclear accident arising from physical damage caused by military means,” the IAEA wrote in its report.

Fourteen monitors from the IAEA visited the site late week amid continued shelling around the plant, which before the war supplied 20 percent of Ukraine’s electricity. Two of those monitors have remained behind, in part to witness events but also in the hope that their presence might help to improve security.

The plant and the area around it, including the complex’s company town of Enerhodar, have endured persistent shelling that has raised fears of a nuclear accident through the interruption of the power supply to the plant.

The IAEA team also witnessed shelling during its visit and called on both sides to cease hostilities in the area, the IAEA report said.

“While the ongoing shelling has not yet triggered a nuclear emergency, it continues to represent a constant threat to nuclear safety and security with potential impact on critical safety functions that may lead to radiological consequences with great safety significance,” the report concluded.

The Zaporizhzhia plant, which lies on the eastern bank of the Dnieper River, is a strategically significant piece of Ukraine’s energy infrastructure. The plant’s region also borders an area where Ukrainian forces have mounted a counteroffensive to reclaim territory lost to Russia at the start of the war. Both countries have blamed the other for the shelling around the plant.

The report — which was released ahead of a briefing by the agency’s director general, Rafael Mariano Grossi, to the UN Security Council later Tuesday — noted that the plant’s Ukrainian workers are operating in a challenging environment.

“The condition that the operating staff is subject to constant high stress and pressure while operating the N.P.P. is not sustainable and could lead to increased human error with implications on nuclear safety,” the report said.

It added that staff at Zaporizhzhia and the three other nuclear plants in Ukraine “have continued to show endurance and resilience in keeping the sites running in a safe and secure way amid the conflict, and the IAEA salutes them.”

On Monday, a fire caused by shelling forced engineers to sever the Zaporizhzhia plant’s last connection to a reserve line that was providing its only source of outside power. That placed critical cooling systems at risk of relying solely on emergency backup power, said Ukraine’s energy minister, Herman Galushchenko on Telegram.

Reactor No. 6, the only working reactor at the plant, was still producing power for the facility itself. As of Monday evening, engineers had not activated diesel generators, according to an official from Energoatom, Ukraine’s nuclear operator.

Galushchenko said it was yet another precarious moment made more threatening by the fact that firefighting crews had not been able to reach the site of the blaze.

“Any repairs to the lines are now impossible,” he said. “Fighting is taking place around the station.”