With Russian forces occupying one of Ukraine’s four nuclear power plants as well the site of the decommissioned Chernobyl facility, the world is getting an unprecedented look at the first major war to ever take place in a country with an established nuclear power infrastructure.

With Russian forces occupying one of Ukraine’s four nuclear power plants as well the site of the decommissioned Chernobyl facility, the world is getting an unprecedented look at the first major war to ever take place in a country with an established nuclear power infrastructure.

Ukraine runs 15 nuclear reactors accounting for about half of its electricity generation, according to the World Nuclear Association. But seven of these reactors have been disconnected from the grid since Russian attacks began on February 24 in order to keep them cool.

Last week, the International Atomic Energy Agency and Ukrainian nuclear authorities acknowledged that the six reactors of the Zaporizhzhya nuclear plant in southeastern Ukraine had fallen into Russian hands after an intense fire fight that saw a training laboratory on plant premises catch fire.

Now, according to reports from the BBC, Russian troops are training their sights on the three reactors South Ukraine nuclear power plant near the city of Mykolaiv in the country’s southern central region.

The Zaporizhzhya plant – which is Europe’s largest nuclear power station – is now surrounded by the invading troops while Ukrainian technicians continue monitoring plant functions from the inside. Ukrainian regulators have claimed that Rosatom, Russia’s state nuclear corporation, has sent engineers to the plant who are now giving orders to the captive staff.

But in a March 12 statement on its website (which may be inaccessible after an attack by the Anonymous hacker group) Rosatom denied that, and characterizing the presence of its engineers at the Ukrainian plant as “consultative assistance” which takes place on “a regular basis.”

Last week, Russian troops detonated ammunition on Zaporizhzhya plant territory that hadn’t exploded during their March 4 attack, though reportedly caused no damage to plant structure.  None of the plant’s six reactors, only two of which are currently operational, were affected and there was no radiation leak. 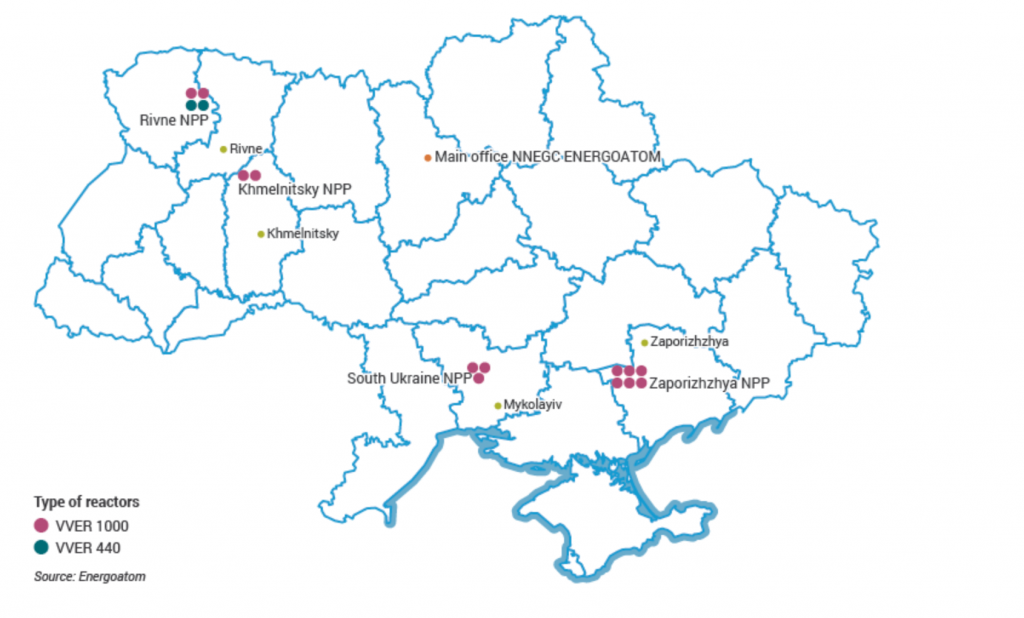 On February 25th, the second day of the invasion, Russian troops overran Chernobyl, which now stores 20,000 spent nuclear fuel rods. The defunct site also houses the remains of the plant’s exploded Number 4 reactor, which is slowly being dismantled under a huge steel dome. The staff that perform those critical activities had been held hostage until last weekend, when about half of them were finally allowed to rotate out after 600 hours on the job since the Russian invasion began.

On two separate occasions, power has been cut to the plant by fighting in the area, leaving critical spent fuel storage pools and radiation ventilation structures without electricity. Power has since been restored, the IAEA reported, but the situation highlights how vulnerable Ukraine’s nuclear facilities are to Russian military aggression.

Now that the coming days could bring the seizure by Russian troops of the South Ukraine plant, we thought it would be useful to revisit our 2018 report on the Ukrainian nuclear industry and highlight the basic characteristics of each of the country’s four Soviet- and Russian-built nuclear power stations.

Location: The Zaporizhzhya plant is situated on the steppes along the Kakhovka reservoir in the Zaporizhzhya Oblast of Ukraine, near the city of Enerhodar, 690 kilometers southeast of Kyiv.  It is the largest nuclear plant in Europe, consisting of six nuclear power units, each with a capacity of 1000 mW. The power produced by the plant provides one fifth of the total power used in Ukraine.

Reactor construction: Soviet authorities adopted the decision to build the plant in 1978 and construction started in 1981. Between 1984 and 1987, Units One, Two, Three and Four were commissioned.

Unit Five was commissioned in 1989 and Unit Six began operations only in 1995, after a post-Chernobyl moratorium on new reactor construction was lifted.

Notable events: The startup of Unit One was delayed by 11 months because of a fire that occurred at the reactor on January 27, 1984. News about the fire was concealed from the public until Gorbachev’s policy of Glasnost began six years later.

In May of 2014, several armed men representing a far-right political group attempted to gain access to the plant but were stopped by Ukrainian police. The plant’s proximity to the fighting that has ground on in the Donbas region for the last eight years, prior to the outbreak of the current war, has made the plant vulnerable to military attack.

How many reactors currently running: Two, both at reduced power.

Location: The Khmelnistky nuclear plant is located in the northern part of the Khmelnitsky region 350 kilometers west of Kyiv in an area of high seismic activity.  The plant operates 2 Russian-built VVER-1000 reactors, each produced 1000 mW.

The plant’s remaining two reactors were originally planned for construction under a 2011 deal with Atomstroyexport, Russian state nuclear corporation Rosatom’s foreign wing. That deal was annulled in 2015, following Moscow’s annexation of Crimea. A 2016 deal with a Korean power firm to complete the reactors has made little progress.

Also unclear is whether a 2021 deal between the plant and Westinghouse to build an AP 1000 reactor at the site will ever go forward.

Reactor Lifetime Extensions: One reactor at the Khmelnitsky plant has received a lifetime extension. Unit One reactor was scheduled to retire in 2018 but will run until 2028.

Notable Events: In 1987, there was a release of radioactive steam in Unit One’s containment room. The incident was rated by the International Nuclear Event Scale as a 3 its seven-point scale, denoting a “serious” incident with consequences contained within the plant.

How many reactors currently running: One. 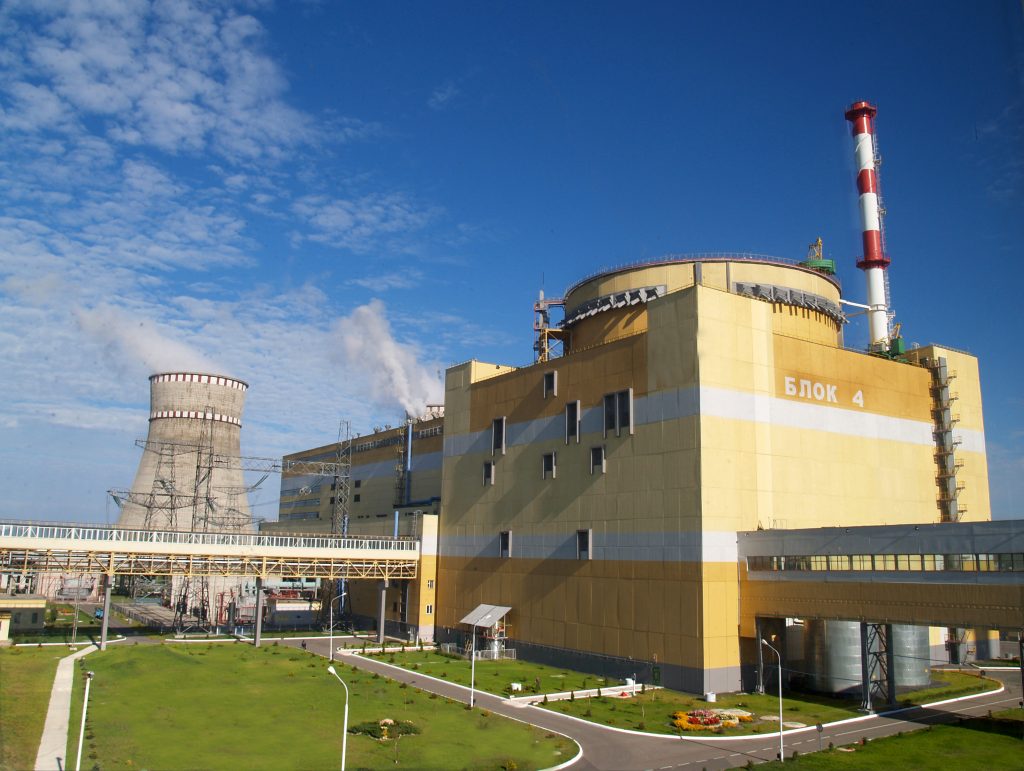 Location:  The Rivne Nuclear plant is located near the town of Varash (known as Kuznetsovsk until 2016) in the Rivne Oblast in Ukraine’s northwest, 390 kilometers west of Kyiv. The combined power of the four units it operates is 2835 mW.

Reactor Construction:  The plant operates four reactors, two Soviet-built VVER-440s and two Soviet/Russian-built VVER-1000s. It was the first nuclear plant in Ukraine to see the construction of the VVER series reactor, which were a departure from the Soviet designed graphite moderated RBMK-type reactors, one of which exploded at Chernobyl in 1986.

Originally conceived by the Soviets in 1971 as the West Ukraine nuclear plant, the name was changed to Rivne during commissioning. Construction in 1973 and two VVER-440 units were commissioning in 1980 and 1981. Unit Three, which was the first of the two VVER-1000s, was commissioned in 1986.

Unit Four was scheduled to be commissioned in 1991, but the Ukrainian government’s 1990 moratorium on new reactor builds prevented that. After the moratorium was lifted, construction on Four resumed in 1993, and it finally entered commercial service in 2006.

Notable Events: In December of 2010, Units One and Two of the Rivne plant were granted lifetime extensions of 20 years, nearly doubling their original 30 life expectancy, and putting off their decommissioning until the early 2030s. In 2018, Unit Three received an identical extension, putting off its retirement until 2037.

Another safety issue at the plant is the ground on which it stands, which is characterized by shifting soils and sinkholes, which, if not properly monitored, could endanger plant infrastructure.

How many reactors currently running: Three 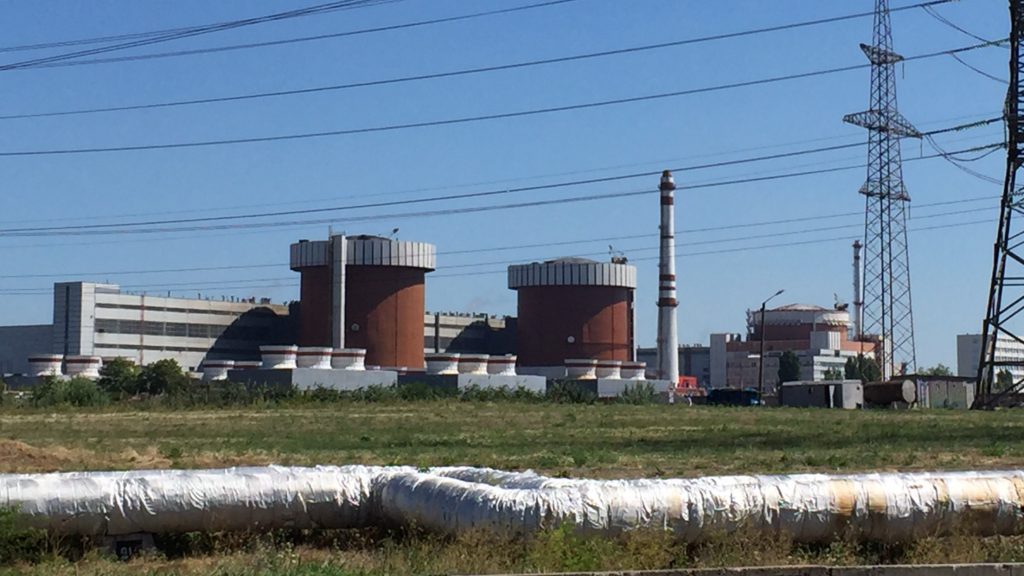 Location: The South Ukraine nuclear plant is located near the city of Yuzhnoukrainsk in the Mykolaiv Oblast 350 kilometers south of Kyiv. It is Ukraine’s second largest functioning nuclear plant and is part of the South Ukrainian Energy Complex, along with the Tashlyk Pumped-Storage Power Plant and the Oleksandrivska hydroelectric plant. The plant lies on the steppes on the banks of the Pivdennyi Bug River and its three reactors generate 2850 mW of electicity.

Reactor Construction:  Construction of the South Ukraine nuclear plant’s Unit One began in 1975 and was completed in 1983. Units One and Two followed in 1985 and 1989, respectively. A fourth reactor was planned but its construction was suspended by Soviet order.

Notable events: The South Ukraine plant became the first to burn fuel fabricated by western nuclear fuel supplier Westinghouse – part of an effort to wean the Ukrainian industry off its dependents on fuel produced in Russia by TVEL.

Nevertheless, in 2008, Energoatom contracted with Westinghouse for 630 assemblies that would be loaded into the South Ukraine plant’s three reactors.

In 2008 Energoatom and Westinghouse Electric Sweden contracted to ship fresh fuel to as many as six reactors.  However, during trial use at South Ukraine NPP in 2012, the fuel became deformed and caused serious damage to the reactor. The use of Westinghouse fuel was then suspended by Ukraine pending its redesign. However, following Russia’s annexation of Crimea in 2014, the contract was revived and extended.

How many reactors currently running: Two