As 2021 drew to a close, the No 1 reactor at the Kursk nuclear power plant in Russia was permanently shut down after 45 years in operation, marking a major step toward retiring the country’s stock of Chernobyl-style RBMK reactors.

Published on January 3, 2022 by Charles Digges 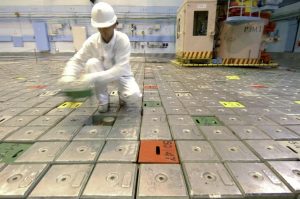 As 2021 drew to a close, the No 1 reactor at the Kursk nuclear power plant in Russia was permanently shut down after 45 years in operation, marking a major step toward retiring the country’s stock of Chernobyl-style RBMK reactors.

The closure is part of a gradual phase-down at the original Kursk nuclear plant, located 524 kilometers south of Moscow,  that will see all four of the site’s RMBK reactors retire by 2031. The power produced by those reactors will be replaced by the two VVER-TOI reactors currently under construction at the nearby Kursk II nuclear plant.

In 2015, Bellona challenged the construction of those reactors over numerous inaccuracies in government-required environmental impact studies for the plant.  The commissioning of the new reactors was initially intended to coincide with the retirement of the last of the RMBKs, but no official startup date has been set, Nuclear Engineering International reported.

Launched in 1976, the Kursk plant’s No 1 reactor was among the first of the RBMK line to be built in the Soviet Union. A reactor of the same model exploded at Chernobyl in April 1986 in the world’s worst nuclear accident, and Russian nuclear officials have been at pains to stress that Kursk’s No 1 reactor had operated safely throughout its career.

“During its operation since 19 December 1976, the unit has generated more than 251TWh of electricity,” the Kursk Nuclear Power Plant’s Acting Director, Alexander Uvakin, said in a release. “This was enough to ensure the energy consumption of the Kursk region for 30 years, given the current consumption. The unit has worked reliably and safely.”

The unit is one among three RBMK units that have been taken out of service by Russia’s nuclear industry in recent years – the first two at the Leningrad Nuclear Power Plant near St Petersburg. Another seven RBMKs operate throughout Russia, and two similar RBMK-1500 style reactors were constructed at the now-decommissioned Ignalina nuclear plant in Lithuania. The remaining three RMBKs at Chernobyl continued operations after the No 4 reactor there exploded, and were not shut down until 2000.

While each of these Soviet RBMKs underwent comprehensive upgrades in the years following the Chernobyl catastrophe, no amount of remodeling has been able to finesse the reactors’ most deviling obstacle where safe decommissioning and dismantlement are concerned – their graphite stacks.

A graphite stack is essentially a bulky cylinder about 7 meters high and 11 meters across made of graphite bricks and weighing about 2000 tons. Fuel is fed into the reactor via channels cut in the masonry, and the graphite acts as the moderator.

The concept originated in the late 1940s when the Soviet Union and the United States began building reactors to produce weapons-grade plutonium – a time when considerations about how to dismantle nuclear installations were not a priority. While most reactors in commercial operation around the globe are of the pressurized water type, the Soviet Union’s first steps in civilian nuclear power were based on this unwieldy graphite moderated design.

But now, Russia’s RBMK fleet has reached retirement age. However, as Rosatom’s plans for dismantling them comes into focus, it’s clear that the question of how to safely dismantle RBMKs remains largely unanswered.

According to officials at the Kursk plant, the No 1 reactor will be treated essentially as an operational reactor, both financially and technically – a phase called “operation without generation,”

What this amounts to is removing the reactor’s fuel and decontaminating what remains of the reactor’s structure aside from its graphite stack. After that, it’s essentially a process of waiting until nuclear science catches up with advances geared to handle the safe dismantlement of the graphite stacks.

Presently, there are two Russian scientific studies underway – one in Seversk, underwritten by the UN’s International Atomic Energy Agency, and the other in Sosnovy Bor – aimed at solving the problem.