KURCHATOV, Russia – Bellona representative spoke out against building a second Kursk Nuclear Power Plant at a public hearing held in the city of Kurchatov, citing errors and miscalculations in the project’s environmental impact study. 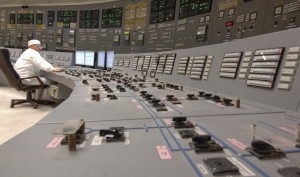 The control room at the Kursk NPP. Credit: RIAN

KURCHATOV, Russia – Bellona representative spoke out against building a second Kursk Nuclear Power Plant at a public hearing held in the city of Kurchatov, citing errors and miscalculations in the project’s environmental impact study.

Representatives of Russia’s nuclear industry admitted to some of the mistakes, for instance that the plant, which is still in blueprints, would emit 30 times less radioactivity in the event of an accident.

The public hearing last week was part of two events geared toward informing residents of the Kursk Region about the prospective construction of a second nuclear power plant (NPP) in the area. The first is the Kursk NPP, which runs four outdated Chernobyl style RBMK reactors.

Three hours of discussion were devoted to the environmental impact of the new plant’s VVER-TOI an as-yet untested design for a two-unit nuclear power plant, which would use VVER-1300/510 type reactors.

According to the hearing’s organizers, 792 people took part. The second stage of the discussion was a roundtable on the materials for licensing the construction of the reactors, which ran for another two hours and included the 368 participants. 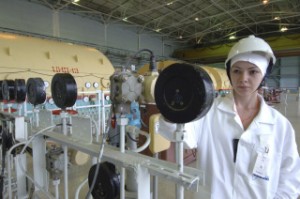 A machine room of Kursk Nuclear Power Plant in the town of Kurchatov. (Photo: Wikimedia) Photo:

Alexei Schukin of the Environmental Rights Center (ERC) Bellona, pointed out numerous inaccuracies in the environmental impact study, specifically those describing what would happen should and accident occur.

An accident is defined as a Chernobyl or Fukushima level event, and environmental impact studies must take into consideration how technicians would limit the consequences. The project’s developers insisted that radiation risks from the new plant are 6.8 x10-8 per year, which is less than the most negligible risk by 15 times.

“The environmental impact study says all is well, and states that during an event, contamination would travel no further than 800 meters,” said Schukin during the hearings. “That would all be fine if there weren’t such situations as instantaneous cold water penetration of a hot reactor chamber, or possible plane crashes.”

Schukin was responding to Nikolai Sokolov, a representative of the Nizhny Novogorod Scientific Research, Engineering, Construction and Surveying Institute (or NIAEP), a branch of Russia’s state nuclear corporation Rosatom, which is the contractor on the project. Sokolov argued the reactors’ bioshield could withstand the impact of a 400-ton airliner.

Dmitry Bulgaryev, the chief engineer on the Kursk NPP-2 project, told Schukin that the chances of an airliner that large hitting the reactor were negligible, so was not addressed in the environmental impact study. Bulgaryev went on to insist that the study’s consideration of a 20 ton jet travelling at 215 meters a second was sufficient. Embarrassingly, it remained unclear as to why the contractors’ presentation included a slide of a 400 ton jet crashing into the reactor if the reactor is clearly not adapted to such an eventuality.

When Schukin asked Bulgaryev about the justifications for the risks of an accident presented in the environmental impact study, Bulgaryev said that the probability of airplane strikes are evaluated in via a calculated method, and that method leaves out a number of possible catastrophes.

Bulgaryev went on to say more generally that the radiation levels associated with the US Three Mile Island Accident, the Chernobyl catastrophe and Fukushima weren’t attributable to technical failures so much as human error, both during the accidents and during their engineering.

A Japanese parliamentary commission concluded in July 2012 that collusive relationships between regulators and the nuclear industry bore more responsibility for the disaster than even the tsunami that hit the plant in March 2011, , so Bulgaryev’s assertion was not entirely off the mark.

But Bulgaryev would not say why he thought the VVER-TOI program was free of flaws. At the same time he admitted that the previous draft of the environmental impact study discussed in 2013 did contain errors about the emissions of cesium that would occur, and that the quantity of possible emissions had been lowballed by 30 times. Bellona criticized the 2013 study for this underestimation.

“A detailed review was conducted and mistakes were revealed,” Bulgaryev said, adding that the present version could not possibly contain any errors.

Bellona’s Andrei Ozharovsky, who is a physicist and an engineer, pointed out at the hearings that the Kursk NPP 2’s prospective VVER-TOI unit was an untried technology. 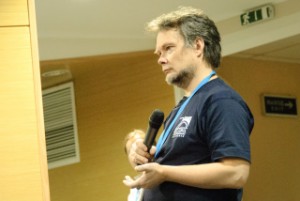 “These units have still never bee built anywhere,” said Ozharovsky. “The environmental impact study however says that the prototype for VVER-1200s are prototypes for the VVER-TOI. And none of these reactors exist outside of blueprints either. The reactors have not even a minute, an hour or a day of experience in actual use. That means the suggestion to built a VVER-TOI is experimental and has no proven real time use or any proven economic indicators.”

Ozharovsky went on to say that Rosatom currently has no reactors so suggest for construction, so its therefore suggesting experimental ones.

“Suggesting new reactor construction has no proven practical efficiency or economic benefit,” he said. “The Kursk Region has seen much alternative, non-nuclear development – we have to think about what’s best not only for Rosatom but for Russia.”

Bulgaryev was asked by Ozharovsky when the first VVER-1200 was to be commissioned, but Bulgaryev left the question unanswered.

“Those who say there’s nothing analogous to the VVER-TOI are mistaken,” he said.

But Nevedomsky was mistaken. According to the Kundankulam NPP’s official website, the plant operates a VVER-1000 reactor, not a VVER-1200.

Ozharovsky asked why there was a need to suggest an entirely new nuclear plant altogether.

Contemporary steam installations working on natural gas can be built more quickly and more cheaply, and most importantly produce inexpensive energy than a nuclear power station, Ozharovsky suggested. He presented the nuclear representatives with a copy of Bellona’s report The Economics of the Russian Nuclear Power Industry which asserts that: Thus, the power produced by nuclear power plants already now costs more to the Russian consumer than the electricity generated by power plants running on gas, while the electricity tariff is still far below the level needed to cover the true expenses of the nuclear energy industry. The deficit is compensated for by the state, which essentially provides cost ‐ free capital to the industry, bears liability for those nuclear risks that are not covered by insurance premiums, and participates, to a significant degree, in direct subsidization of the nuclear fuel cycle.

Rosenergoatom’s Nevedomsky told those gathered that he had no figures on how much building a nuclear power plant cost or how long it took to recoup those costs in electricity sales.

“It’s not possible to begin a discussion on the economic of a nuclear power station, but we must have such a discussion,” said Nevedomsky. “It’s true that the rule of order of this event haven’t provided the possibility of discussing differences of opinion emerging from disagreements over questions.”