Russia and Norway meet on issues of nuclear safety

Through years of political tremors and mutual suspicion between West and East, the one area where Russian and Norwegian officials could shed their misgiving and come together was on questions of nuclear safety.

Published on June 25, 2021 by Anna Kireeva, translated by Charles Digges 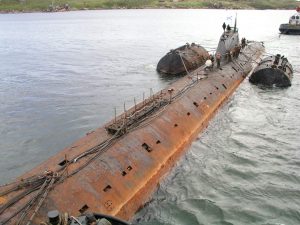 Through years of political tremors and mutual suspicion between West and East, the one area where Russian and Norwegian officials could shed their misgiving and come together was on questions of nuclear safety.

An online meeting between the two sides earlier this month continued that tradition. It was one of a series of such gatherings that have been taking place for the last 24 years under the aegis of the Norwegian-Russian Commission on nuclear and radiation safety.

The group was convened in the tumultuous mid-1990s, after the fall of the Soviet Union exposed the vast radiation dangers left behind by the Cold War – danger that, if left unaddressed, posed

Decommissioned nuclear submarines still loaded with spent nuclear fuel bobbed neglected in the water at bases throughout the Murmansk region. An entire ship loaded with spent nuclear icebreaker fuel was moored for years a mere 2 kilometers from that city’s center, posing an environmental threat its 400,000 residents. The Chernobyl-era reactors at the Kola Nuclear Power Plant were in an uncertain state. Further from shore laid sunken containers of radioactive waste as well as entire submarines intentionally scuttled by the Soviets in Arctic seas.

While a number of these projects are well on their way to completion, Audun Halvorsen, Norway’s state secretary to the minister of foreign affairs, said continued joint efforts between the nations were necessary to get them done.

“While such activities are ongoing and there are sources of pollution that can affect health and the environment in the Far North, there is also a need to continue long-term cooperation in this area,” he told the online gathering.

The bilateral experience Russia and Norway share in submarine dismantlement has fueled much of this progress. While the problem of decommissioned submarines loaded with spent nuclear fuel was still acute in 2004, It has been more or less completely resolved as of today.

According to representatives of Rosatom, Russia’s state nuclear corporation, the total amount of spent nuclear fuel removed from Northwest Russia in 2020 was five echelons, or trainloads. This fuel came from the former submarine bases of Andreyeva Bay, Gremikha and the Lepse. The total radioactivity of all the removed fuel was 728,000 curies.

According to Anatoly Grigoriev, Rosatom’s head of international technical assistance projects, Andreyeva Bay will remain the corporation’s most difficult project for some time to come.

“Since we have all the necessary infrastructure, we can draw up a work plan for each year,” he told the online gathering. “For example, in 2021, it is planned to handle SNF for specific facilities, remove spent nuclear fuel accumulated earlier, manage radioactive waste and rehabilitate certain buildings and structures. “

One echelon has already been removed this year, which included one container with six defective spent fuel assemblies unloaded from Andreyeva Bay’s notorious Building No. 5.

“This is a success, but this is just the beginning of dealing with defective fuel,” Grigoriev said.  “SevRAO” starts working with it in full this year in order to gradually reduce the risk of various ‘malfunctions’ from this type of fuel.”

To date, about 40% of spent nuclear fuel and about 30% of radioactive waste have been removed from Andreyeva Bay, and some facilities are being rehabilitated. Now the task is to create conditions for unloading spent nuclear fuel from storage facility 3A, and to develop technologies for handling defective fuel. Building No. 5 will also have to be inspected for its eventual decommissioning.

We have earlier reported, all 639 spent fuel assemblies have been removed from the Lepse, including 19 damaged assemblies.

“Now we can say that the nuclear threat of the radioactive facility, which caused serious fears of the population, has been finally eliminated,” said Oleg Kryukov, who directs Rosatom’s radioactive waste and spent nuclear fuel programs.  “We are all glad that the Lepse story has concluded.

At Gremikha, three of total of 11 removable cores from nuclear submarine reactors running on liquid metal coolant remain to be disassembled. This laborious and technologically complex work will be finished in three years, Rosatom officials said, adding that 50 % of Gremikha’s radioactive waste has now been removed.

Norway has long expressed concern that the operational life of the Kola nuclear plant’s reactors  have been extended. At the online meeting, Rosatom representatives said that the dates for decommissioning the plant’s four reactors would be 2033, 2034, 2041, and 2044.

“We appreciate the joint projects for the decommissioning of old reactors at the Kola NPP,”  Norway’s Halvorsen said. “In the event of accidents, the consequences for new reactors will be less than for old ones.

Russia’s most recent cleanup efforts focus on retrieving radiation hazards such as nuclear waste and two entire nuclear submarines that sank in Arctic seas.  Two submarines, known as the K159 and the K-27 have been identified by Russia as posing the biggest threat. A final decision on raising them hasn’t yet been made.

“The decision is being prepared, we are carefully studying the issue,” said Kryukov. “We are not against the participation of international experts. Nobody has ever carried out the lifting of such objects. We have to carefully study the issues of nuclear safety and find out all the characteristics of the vessel hulls. An examination of the options should be carried out, which can be done with international cooperation.”

In September this year, the Kurchatov Institute plans to organize an expedition to the K-27 nuclear submarine in the Kara Sea.

“We are satisfied with our cooperation. It is constructive and transparent, ”Kryukov concluded.