How did Bellona help rid Russia of its most radioactive ship? It started over lunch

In order to clean up one of the most dangerous radioactive hazards in northwest Russia, Bellona took the European Union out for what ended up being a very short meal back in 1994. 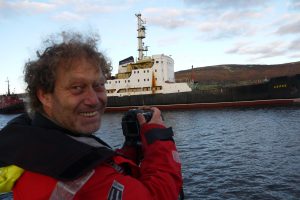 Bellona President Frederic Hauge watches as the Lepse is towed from Atomflot in Murmansk to the Nerpa Shipyard, where it was finally dismantled. Credit: Bellona

In order to clean up one of the most dangerous radioactive hazards in northwest Russia, Bellona took the European Union out for what ended up being a very short meal back in 1994.

It was a significant invitation. The situation was dire but largely unknown outside Russia’s borders. An old dry cargo ship called the Lepse, laden with 639 nuclear fuel assemblies, floated nearly forgotten just two kilometers from central Murmansk, Russia’s Arctic capital, and its population of 300,000.

As of earlier this month, that threat is no more. Russian technicians, in an arduous multi-year process using techniques they had to invent along the way, have finally removed all those assemblies and sent them safely to reprocessing.

“It is important for me that even though this has taken 30 years, the Russian leadership and technologies used here have been the best option,” Frederic Hauge, Bellona’s president, said in a video address to mark the occasion.  “The story about the Lepse is one of openness, cooperation, progress and making results. It’s also a story of human beings taking responsibility and wanting to do good.”

For three decades the notorious ship served as a mobile water-borne filling station for the Soviet nuclear icebreaker fleet, defueling and refueling reactors at sea. Originally built in 1934 to shuttle cargo on rivers in Ukraine, the Lepse was pulled out of mothballs in 1961 and retrofitted for its nuclear errands in the Arctic.

From then until the 1980s, the vessel was used to refuel the first generation of Soviet nuclear icebreakers, including the Lenin, the Arktika and the Sibir, eventually amassing within its holds 639 spent nuclear fuel assemblies.

Things didn’t always go as planned. A coolant leak in the Lenin’s reactors in the mid-1960s force the Lepse to onload several damaged fuel roads that ended up swelling dangerously in their casings. In yet another dark turn, the Lepse was also used to help dump radioactive waste in the Kara and Barents Seas, contributing further to Russia’s Cold War heritage of nuclear and radiological hazards strewn across the Arctic sea floor – the extent of which the Russian government is now taking efforts to address.

In 1988, however, the Lepse was taken out of service and moored at Atomflot, the Murmansk-based nuclear icebreaker headquarters, where it soon became a floating radioactive menace.

At the time, the technology to safely dismantle the vessel and send the spent fuel onboard to safer storage didn’t yet exist.

Neither did the political will. In the throes of its post-Soviet economic meltdown, Moscow had other problems on its mind. Even so, when Russian environmentalists tried to bring the Lepse and other Soviet legacy nuclear threats to public attention they were harassed and often arrested by the remnants of the KGB.

Europe, for its part, was turning a blind eye. In the late 1980s and early 1990s European Union policy was let Russia deal with its nuclear waste legacy on its own. 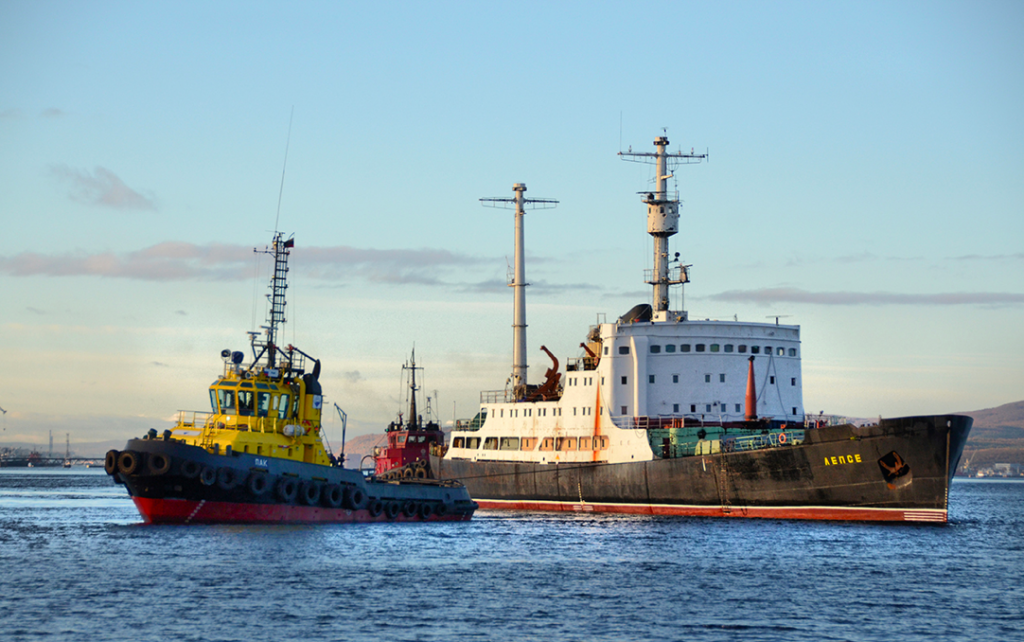 The Lepse under tow out of the Atomflot port in Murmansk in 2012. Credit: Bellona

But following the fall of the Soviet empire in 1991, Bellona had been busy collecting evidence that Russia needed more help than anyone in either Europe or Moscow was yet willing to fathom or admit.

In the 1990s Bellona published numerous reports cataloguing Northwest Russia’s nuclear woes, including nearly 200 decaying nuclear submarines, their reactors still laden with spent nuclear fuel. If left to rust at dockside, the threat of contamination was unprecedented — a Chernobyl in slow motion. Further from shore, under the waves, lurked other submarines and nuclear waste intentionally dumped by the Soviet Navy. Still more radioactive spent fuel was piling up in storage tanks and open-air bins on military bases and in shipyards throughout the Russian Arctic.

In a way, the Lepse and its radioactive holds was just tip of the iceberg. But it was clear the problem of the vessel – and everything that came after it ­­­– was too big for Russia to cope with alone.

“The Lepse was the pilot project for many other cleanup operations in northwest Russia after the Cold War,” Hauge said in his address. “This was the real start of the results that we have achieved today.”

But none of it could get done without help from Russia’s neighbors to the west. So Hauge and Bellona staff tried a different approach to bring Europe into the fold. They asked the European Commission on the Environment out to lunch at the most unique venue they could think of ­­– the Lepse itself.

The commissioners said yes, and lunch was served. Among the table settings was a Geiger counter, and somewhere during the first course, the Geiger counter began to squeal.

“Two things happened at once,” Hauge recalled at one point.  “First, this became the shortest official meal I’ve ever attended. Second, the European Commission allocated funding to solve the Lepse problem.”

The funding pledge from Europe – which was allocated in a record-breaking four weeks – opened the floodgates, and over the next two and a half decades, tens of millions of dollars would pour into Russia from Europe aimed at cleaning up the Soviet legacy of radioactive waste. 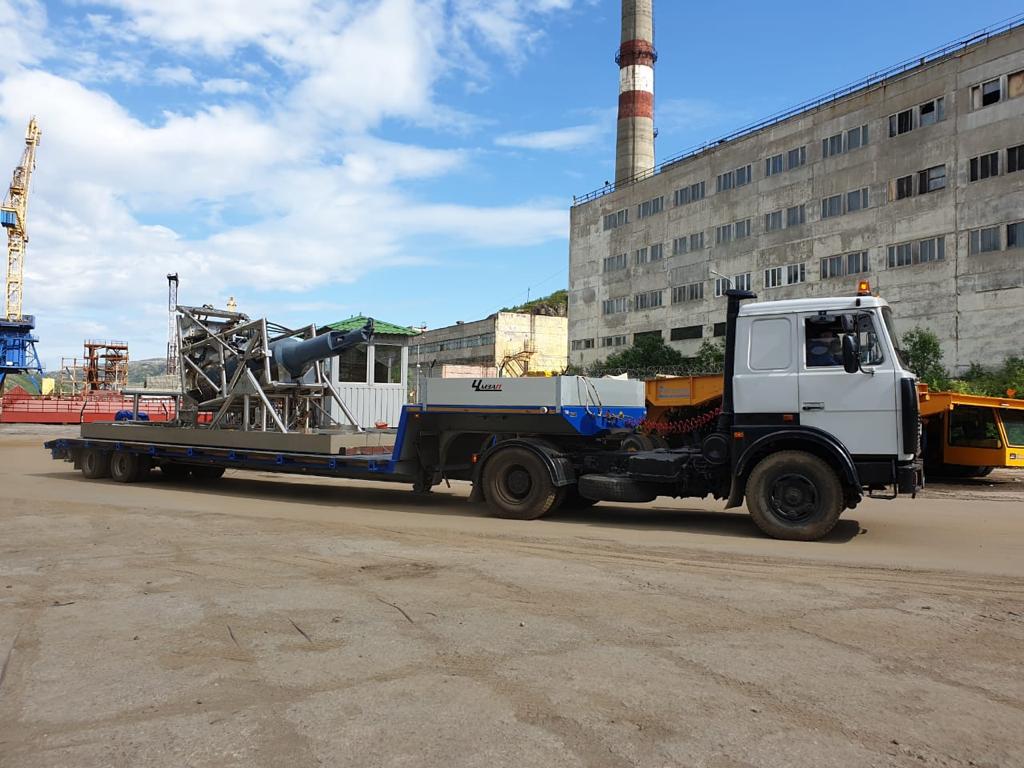 A truck departing the Nerpa Shipyard with the very last of the Lepse's spent nuclear fuel. Credit: Bellona

Gone, for instance, are those 200 nuclear submarines that bobbed neglected at dockside in bases surrounding Murmansk. And on the way to being gone are the dangers posed by 22,000 radioactive fuel assemblies that had piled up since the 1960s in a nearly forgotten submarine base called Andreyeva Bay.

This week as Russian nuclear officials gather in Murmansk to discuss the end of the Lepse project, there’s nowhere to set a lunch counter. The remains of the Lepse have been cut to pieces at the Nerpa Shipyard, north of Murmansk, where it was finally brought after Bellona’s two-decade-long crusade to see it safely dismantled.

The infrastructure required to get the job done was immense. In 2018, an enormous shelter was completed, within which the process of extracting the nuclear fuel rods housed aboard the Lepse finally began.

The funding was supplied by a special nuclear cleanup fund maintained by the European Bank of Reconstruction and Development, which managed donations from Belgium, Canada, Denmark, the European Union, Finland, France, Germany, the Netherlands, Norway and the UK to finance the project.

Removing the 639 fuel rods from the Lepse’s holds is one of the most technically demanding nuclear legacy cleanup operations Russia has ever undertaken. Among those rods were 19 that were damaged when the Lepse refueled the Lenin, and these rods defied removal by conventional means.

Instead, technicians had to cut these fuel rods out of the hold, taking with them much of the surroundings structure. These amalgams of metal and fuel were then sealed in one container, then another and then a third before they left the shelter for remote storage.

The sections of the Lepse that never contained spent nuclear fuel – the bow and stern for instance – will be sent for storage at Sayda Bay, a defunct military base in the Arctic that has been repurposed to house low-level nuclear waste.

“I think our capability to make results together is what has made progress,” Hauge said in his address. “And the experience we have gained with the Lepse will help us clean up many other sites in the world. I am very proud of what we have achieved together and I hope for a long cooperation, and I am grateful for all the people doing the real work at the ground.”