Rashid Alimov, a prominent environmentalist who led vigorous efforts to inform Russians of radiation dangers and campaigned for clean air and against dangerous landfills in St Petersburg, died Thursday of complications related to covid-19. He was 40 years old.

Published on December 18, 2020 by Charles Digges 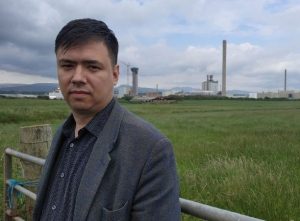 Rashid Alimov, a prominent environmentalist who led vigorous efforts to inform Russians of radiation dangers and campaigned for clean air and against dangerous landfills in St Petersburg, died Thursday of complications related to covid-19. He was 40 years old.

He is survived by his wife, attorney Olga Krivonos, and two children, a son and a daughter.

His passing was mourned on social media by colleagues, relatives and lawmakers – and by Bellona, where he played a pivotal role in the early 2000s, helping launch Ecology and Rights, the organization’s Russian-language environmental magazine, during particularly turbulent times for the movement.

“Rashid sat in a little room accessed by a wooden staircase, and this room became the nest where the magazine was born” recalls Viktor Teryoshkin, one of the magazine’s major contributors, about their early meetings. “He was a swarthy, handsome man, tall and skinny, and he was typing away at incredible speed.”

Among his major contributions was a series of articles and working papers on remotely positioned radioactive batteries used in navigation beacons, called RTGs, thousands of which were left abandoned after the fall of the Soviet Union – posing lethal hazards in Russia’s polar regions. The strontium-90 at their core risked becoming fruit for terrorists and their irradiated metal often turned up in the hands of scavengers who sold their finds in public markets.

Alimov’s reporting sounded the alarm on this emergency and spurred joint action between Russian and Norwegian authorities. In 2008, the two sides announced they had tracked down and disposed of all orphaned RTGs on the northwestern Kola Peninsula, thanks largely to Alimov’s tireless documentation.

“He was always the public’s advocate,” said Charles Digges, editor of Bellona.org. “It’s not often that an entire Russian region owes a debt of gratitude to a single reporter, but in Rashid’s case, it’s true. He will be sorely missed.”

Alimov later went on to join Greenpeace, where he led projects on air pollution, waste management and worked on the organization’s anti-nuclear campaign. Through his efforts, several landfills were closed.

In particular, his activism led to public hearings on an incinerator plant planned for construction in St Petersburg. But Rashid’s campainging convinced the city governor to cancel the plans. As a consequence of this work, Alimov wrote the brochure “What to do with Garbage in Russia,” which became a manual for thousands of activists throughout the country.

But it could be said that his true passion was nuclear issues – and protecting his fellow citizens from the all-too-common sloppiness in its handling. While at Greenpeace, he became one of Russia’s leading experts on the topic, quoted widely in the media.

He frequently led expeditions to some of the former Soviet Union’s most contaminated sites – Chernobyl in Ukraine, and Mayak, Russia’s major nuclear fuel reprocessing site in the southern Urals. While there, he took samples and sounded the alarm on behalf of local citizens. Just this week, Greenpeace’s international laboratory released a report on a new study of Chernobyl’s consequences, which Alimov helped write, the group said on its website.

After a release of ruthenium at Mayak in 2017, and a radiation accident near Arkhangelsk in 2019, it was Alimov’s expertise that formed the core of Greenpeace’s response, and his advocacy publicized incidents that the authorities had sought to hide.

Closer to home, he led the charge against plans to fuel the Akademik Lomonosov, Russia’s controversial floating nuclear plant, at the Baltic Shipyard, located in central St Petersburg and its population of 5 million. Because of that, the fueling operations were transferred to Atomflot, Russia’s nuclear icebreaker port in Mumansk.

Alimov was also tireless in bringing to light Russia’s imports of deplete uranium hexafluoride from other countries, most notably Germany. His advocacy in that realm forced debate on whether the substance should be seen as nuclear waste, or whether it should be considered raw material for nuclear fuel processing. For over a decade, he made compelling arguments in favor of the former.

“Rashid was a unique expert and a kind, cheerful, intelligent person with an incredible sense of humor,” Greenpeace said in a statement on its website. “He will be missed.’