It won’t come as a surprise that radioactive contamination is a major problem facing the government of Ukraine, the country that inherited the Chernobyl nuclear plant when the Soviet Union collapsed in 1991. What is surprising is that much of that contamination is no longer coming from Chernobyl at all. Instead, it originates at a site that’s remained largely unknown to the outside world and goes only erratically policed even by local nuclear authorities.

Published on December 8, 2020 by Charles Digges

It won’t come as a surprise that radioactive contamination is a major problem facing the government of Ukraine, the country that inherited the Chernobyl nuclear plant when the Soviet Union collapsed in 1991. What is surprising is that much of that contamination is no longer coming from Chernobyl at all. Instead, it originates at a site that’s remained largely unknown to the outside world and goes only erratically policed even by local nuclear authorities.

That site, the Pridniprovsky Chemical Plant, in central Ukraine is the focus of a new report by Bellona, which aims to elevate the issue to the level of urgent international attention and suggest a coordinated roadmap for the site’s lurching cleanup efforts.

Once the biggest uranium processor in the Soviet Union, the Pridniprovsky Chemical Plant spent decades producing bomb-grade materials for use in the Soviet nuclear arsenal. Now the site houses some 40 million tons of radioactive waste – more than 15 times the amount of waste found within Chernobyl’s No 4 reactor, which exploded in 1986.

That’s bad news for the 230,000 residents of Kamianske, the river port town closest to the once secret facility, who, as studies show, have long confronted the effects of the plant’s contamination. The pollution also has the potential to reach farther down the Dnieper River, one of Eastern Europe’s most important waterways, which flows past the plant to the Black Sea. 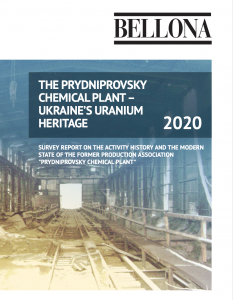 The Pridniprovsky Chemical Plant began operations in 1947, becoming the biggest producer of yellowcake in the Soviet Union. In its prime, it reprocessed 65 percent of all uranium ore used within the empire. In 1991, the year the Soviet Union was dissolved, the plant abruptly ceased operations and virtually no plan was made to secure its radioactive heritage.

It wasn’t until 2000, that a state-financed group called Barrier, operating under the supervision of Ukraine’s Ministry of Energy and Coal, took over control some of the plant’s contaminated sites and buildings. Other parts of the plant’s territory were divided among other private chemical companies and state enterprises. Eventually, in 2007, the Pridniprovsky Chemical Plant was declared bankrupt and much of its property was auctioned off.

The remaining waste has been divided into nine open-air pits, called tailings, that contain a dusty radioactive pulp, vulnerable to leakage as radon gas and exposed to the elements. None of the sites are protected at anywhere near international standards.

Altogether, some 250,000 square meters of the former plant are contaminated with radionuclides. Another 20 buildings on the site that were used for the production of yellowcake also remain highly contaminated.

But whose responsibility all of this is remains something of an open question.  The Ukrainian government has spent millions of dollars on various projects aimed at bringing the contamination under control, but none have led to significant improvements.

It was as late as 2003 that Ukraine’s Cabinet of Ministers adopted an 11-year program geared toward bringing the Pridniprovsky Chemical Plant into an environmentally safe state, with the aim of protecting local residents from the harmful effects of ionizing radiation.

That program was followed by another in 2009, which is still running today – at least at the legislative level. But its implementation has been chaotic, and Ukrainian nuclear officials criticized the Ministry of Energy and Coal for failing to monitor the activities of Barrier properly. By 2018, Barrier itself ran out of state funding and audits found that it had misapplied funds, leading to a number of criminal cases.

A number of international funders have arrayed to assist rehabilitation projects at the plant, among them Sweden, Norway the International Atomic Energy Agency and the European Union, and most of these remain in various stages of completion. The EU, primarily, has spent €10 million on developing a strategy for decontaminating and rehabilitating the site. The program was renewed in 2018 but had to be suspended due to the enormous debts Barrier had racked up. Another EU project from 2017 aimed at bolstering radiation protection at the site, as well as overseeing security and emergency measures remains ongoing.

What comes of the Pridniprovsky plant now is still an open question. The lack of any overarching strategy had led to squandered resources and a lack of continuous development across the various programs that have been attempted. Because of these program interruptions, coupled with unstable funding and weak management, carrying out continuous radiological monitoring at the site has been nearly impossible.

At a basic level, Bellona’s report urges officials in Kiev to take the problems Pridniprovsky plant seriously, and suggests a wholesale change of ideology among the authorities who are tasked with making the site safe. Any progress, the report, concludes, hinges on Ukrainian officials demonstrating their intention to support such efforts, as well as further financial support from the EU and other international donors to implement them. It is our hope that our new report can spur that critical conversation.