The European Bank for Reconstruction and Development has signaled its readiness to help Russia raise Soviet-era radioactive debris, including two sunken nuclear submarines, from the bottom of Arctic seas.

The European Bank for Reconstruction and Development has signaled its readiness to help Russia raise Soviet-era radioactive debris, including two sunken nuclear submarines, from the bottom of Arctic seas.

While the deal is not yet final, it is thought that financial assistance would be allocated by the bank’s Northern Dimensions Environmental Partnership program – whose Nuclear Window fund has disbursed millions of dollars to help clean up radioactive hazards in Russia and Ukraine.

Talks on funding the recovery of these Cold War artifacts have been underway since the end of last year, when the Russian government reinvigorated long-dormant discussions on retrieving the sunken radioactive cast offs. Alexander Nikitin, who heads Bellona’s St Petersburg offices, has been a part of these discussions.

According to the Russian government’s official website on submarine decommissioning programs, the plan to raise the subs was presented at the EBRD’s assembly of donors in December, where the cost for the project was estimated at €300 million.

It will now be up to Russia, the site reported, to furnish the bank with a comprehensive plan on raising the subs. While Moscow has considered various methods for raising the subs over the years, those who participated in the December discussions concluded a special ship might have to be built to get the job done.

Beginning in the 1960s, the Soviet Navy used the waters east of the Novaya Zemlya atomic weapons testing range as a sort of watery nuclear waste dump. While the Soviet Union was hardly the only nuclear nation that resorted to dumping radioactive waste at sea, it was one of the most prolific.

Scientists at the Nuclear Safety Institute of the Russian Academy of Sciences, or IBRAE, say that time and corrosion have managed to decay thousands of these hazards and render them harmless. This leaves about 1,000 that continue to post a high risk of spreading radioactive contamination.

Chief among these are two submarines, the K-159 and the K-27, both of which officials say pose the greatest threat to the environments in which they now lie.

The K-159, which sank while it was being towed to decommissioning in 2003 and killed the nine sailors aboard, now lies in some of the most fertile fishing grounds of the Kara Sea. 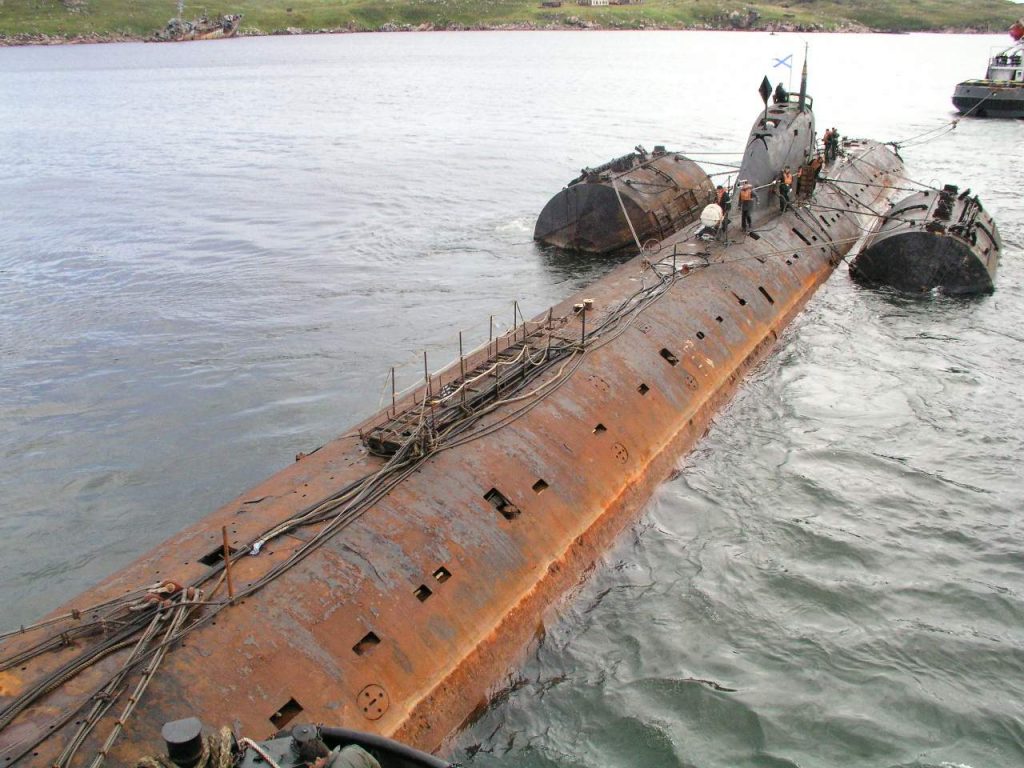 Raising this sub, say Russian experts, should be a priority. Its reactors hold some 800 kilograms of spent nuclear fuel, which they fear could contaminate the sea floor, leading to an economic crisis for the Russian and Norwegian fishing industries.

The K-27 submarine, unlike the K-159, was scuttled intentionally. Launched in 1962, the sub suffered a radiation leak in one of its experimental liquid-metal cooled reactors after just three days at sea. Over the next 10 years, various attempts were made to repair or replace the reactors, but in 1979, the navy gave up and decommissioned the vessel.

Like the K-159, the K-27 claimed its share of victims. Nine members of its crew of 144 died of radiation related illnesses shortly after returning to shore. Many more of the crew succumbed to similar illnesses in the years that followed.

Too radioactive to be dismantled conventionally, the Soviet Navy towed the K-27 to the Arctic Novaya Zemlya nuclear testing range in 1982 and scuttled it in one of the archipelago’s fjords at a depth of about 30 meters.

The sinking took some effort. The sub was weighed down by concrete and asphalt to secure its reactor and a hole was blown in its aft ballast tank to swamp it. But the fix won’t last forever. The asphalt was only meant to stave off contamination until 2032.

Worse still is that the K-27’s reactors could be in danger of generating an uncontrolled nuclear chain reaction, prompting many experts to demand it be retrieved first.

Raising these submarines from the depths will require technology Russia currently lacks. Even the lifting of the Kursk – perhaps the most famous sub recovery to date – required the assistance of the Dutch. But the K-159 lies at a depth much greater than the Kursk did, leading many experts to suggest building an new vessel for the purpose.

From 1946 to 1993, more than 200,000 tons of waste, some of it highly radioactive, was dumped in the world’s oceans, mainly in metal drums, according to the International Atomic Energy Agency.

The lion’s share of dumped nuclear waste came from Britain and the Soviet Union, figures from the IAEA show. By 1991, the US had dropped more than 90,000 barrels and at least 190,000 cubic meters of radioactive waste in the North Atlantic and Pacific. Other countries including Belgium, France, Switzerland and the Netherlands also disposed of tons of radioactive waste in the North Atlantic in the 1960s, 70s and 80s.