France begins winding down its reliance on nuclear power

France began shutting down its oldest nuclear plant last month after 43 years of operation, the first in a series of closures the government has proposed though the the country won’t altogether abandon its reliance on nuclear power.

Published on March 4, 2020 by Charles Digges

France began shutting down its oldest nuclear plant last month after 43 years of operation, the first in a series of closures the government has proposed though the the country won’t altogether abandon its reliance on nuclear power.

Yet the closure of the two reactors at the Fessenheim plant along the Rhine River on France’s border with Switzerland and Germany, is part of a broad energy strategy to rely more on renewable energy sources.

That strategy would see French dependence on nuclear energy from supplying three-quarters of its electricity to about half by 2035.

The shutdown has also been a key goal of anti-nuclear campaigners since the Fukushima disaster in 2011. Experts have noted that the reactors at Fessenheim, brought online in 1977, fall far short of even those reactors at Fukushima, with some warning that seismic and flooding risks in the Alsace region have been underestimated.

Prime Minister Edouard Philippe says the plant’s second reactor will be shut down in June 30 – though it will be several months before both reactors go cold and their used fuel can start to be removed.

Another dozen reactors that will soon exceed their 40-year age limit must close by 2035 to meet the phase-down target. The plan also sees France closing its remaining coal plants, and moving to renewables like solar and wind to close the energy gap and help fight climate change.

But at the same time, state-owned energy giant EDF is racing to get its first next-generation reactor running at the Flamanville plant in 2022– already 10 years behind schedule – and more may be in the pipeline.

France’s history with nuclear power runs deep. The country runs 58 nuclear power plants, which sprang up largely as a response to the oil crisis in the 1970s. Those were built on the foundation of the CEA atomic energy commission, which was established in the wake of World War II in an effort to reestablish the nation’s sovereignty. 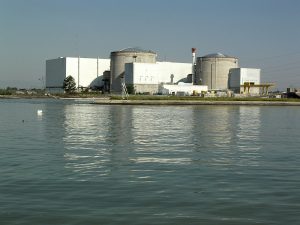 Activists like Charlotte Mijeon, who is the spokesperson for the anti-nuclear group Sortir du nucléaire, told Voice of America news the Fessenheim closure is welcome news, but contended it doesn’t go far enough.

“The government is closing one nuclear power plant, but it should not make us forget that the rest of the nuclear fleet is aging,” she told the agency.

She also pointed to the huge subsidies nuclear power receives from the government, which they say makes it difficult for renewable power to compete.

But nuclear supporters say the closures of reactors, which have been a boon to regional economies, will lead to the loss of high-paying jobs and hobble France’s efforts to meet.pledged carbon dioxide reductions.

In an op-ed run by the daily newspaper Le Monde, Valérie Faudon, a delegate with the French Nuclear Energy Society said the Fessenheim closure would lead to an additional 10 million tons of carbon dioxide emissions per year.

Still, France’s long insistence on using nuclear power has irritated Germany and Switzerland, which, as minority shareholders in Fessenheim, have long urged its shutdown. Germany also has plans of its own to phase out its nuclear power plants completely, a task it says it will finish by 2022.

Polls among the French show growing resistance to nuclear power, with one survey taken in 2018 showing 53 percent of the population against the technology.