Russia has launched what it bills as the longest nuclear submarine ever built at a ceremony last month in the Arctic port of Severodvinsk – an event that Russia President Vladimir Putin marked with a special telecast from the Kremlin. 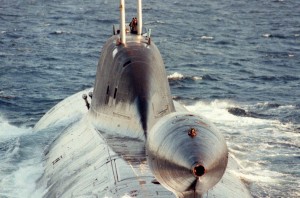 Russia has launched what it bills as the longest nuclear submarine ever built at a ceremony last month in the Arctic port of Severodvinsk – an event that Russia President Vladimir Putin marked with a special telecast from the Kremlin.

The Belgorod, as the submarine is called, is 184 meters long, and will be capable of carrying six warhead-tipped “Poseidon” drones – one of Russia’s newest weapons that have been dubbed “doomsday” devices by the international press.

But the Belgorod is not just a weapon. The vessel’s hull, at nearly twice the length of a soccer field, also houses equipment for deep-sea operations, such as placing small nuclear reactors on the ocean floor to power secret military installations in the Arctic.

The vessel is also one of few nuclear submarines Russia has launched since the heyday of the Northern Fleet. Once the terror of the Cold War seas, the fleet fell into dangerous disrepair after the collapse of the Soviet Union. Decades of international assistance helped Russia finally decommission the fleet’s 200 derelict nuclear submarines ­– leaving the Russian Navy in a demoralized state.

Over the past decade Putin has been leading a post-Soviet revival of Russia’s submarine forces aimed at protecting Moscow’s interests in the Arctic.

The last Russian nuclear submarine to hit the waters was the Severodvinsk in 2013, an attack sub of the Yasen class meant to replace Russia’s old Akula class submarines.

But the Belgorod is a different animal from its exclusively warlike predecessors. Its scientific capabilities have caused a stir among defense bloggers, who say the Belgorod will be able to weave a web of underwater sensors meant to detect NATO submarines, similar to NATOs SOSUS system in the North Atlantic.

According to one expert citied by the Barents Observer, Russia’s sensor system will be called “Harmony” and will likely be powered by small undersea nuclear reactors that the Belgorod will install on the ocean floor. 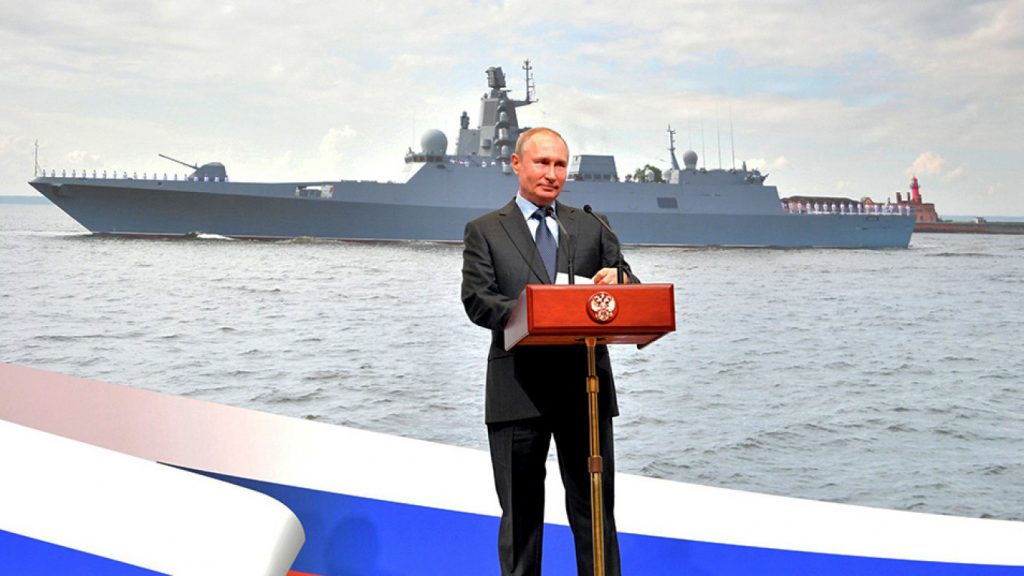 Russian President Vladimir Putin speaking in a special telecast to announce the launch of the Belgorod nulcear submarine. Credit: Kremlin.ru

The submarine’s enormous hull also has space for mini submarines meant for deep-sea exploration. The Barents Observer reported that the huge Belgorod would do double duty to the Russian Navy and Russia’s Main Directorate for Deep Sea Research, or GUGI in its Russian acronym.

But the vessel has plenty of ties to the Cold War past. The Severodvink shipyard laid the Belgorod’s hull in 1992, when the Russian Navy initially intended to build another Oscar II class multipurpose submarine. But the hull went unused for 20 years until 2012, when it was repurposed to become the behemoth Belgorod.

But it’s the nuclear annihilation the Belgorod’s weapons are said to be capable of that bear the most resonance with the Soviet past.

The Poseidon torpedoes were first revealed last year as a threat Putin delivered during his 2018 annual address. Speaking before a screen showing animated missiles striking US targets, Putin boasted to the world that his new line of nuclear weapons had unlimited range.

Among them was the Poseidon drone, a torpedo-like device that, according to Russian-state media, is powered by an onboard nuclear reactor. According to the Barents Observer, the Poseidon is a so-called second-strike weapon designed to shower warheads on an enemy that has launched a first strike on Russia. The propulsion system is also reported to be silent, making it impossible to detect.

Now that it has been launched, the Belgorod will now complete mooring tests and launch its reactors. After sea trials, the enormous vessel is expected to go into fulltime operation in 2020.