Russia dismantles one of it nuclear icebreaking legends

Officials at the Nerpa shipyard near Murmansk have said they plan to offload the reactor of the retired Arktika nuclear icebreaker by November, marking the second major decommissioning of such a vessel that Russia has ever undertaken. 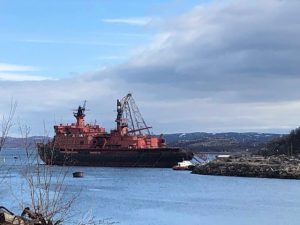 The Arktika Nuclear icebreaker, which is undergoing dismantlement at the Nerpa Shipyard. Credit: Anna Kireeva

By Charles Digges and Anna Kireeva

Officials at the Nerpa shipyard near Murmansk have said they plan to offload the reactor of the retired Arktika nuclear icebreaker by November, marking the second major decommissioning of such a vessel that Russia has ever undertaken.

The first was the Sibir, which officials said provided a useful blueprint for tackling the Arktika. Both vessels were built as part of Project 10520, which until recently was the most powerful nuclear icebreaker series in the world.

But now, both of the older vessels will be replaced by two even larger icebreakers that will bear their names, the hulls of which have been floated at the Baltic Shipyard in St Petersburg. The new Arktika is expected to be commissioned this year, followed by the new Sibir in 2021. Both ships, the Kremlin hopes, will lead a broad push to keep the Arctic’s Northern Sea Route open to shipping year round.

Moscow intends to exert control over east-west shipping traffic with new icebreakers like the Artika and the Sibir, providing both pilotage and convoy services through the icy passage and charging tolls to international frieght operators.

The plans have caused international controversy. Speaking at a meeting of the Arctic Council in Finland Earlier this month, US Secretary of State Mike Pompeo said Russia’s efforts to control Arctic shipping were “illegal.”

But Moscow’s designs on commercially colonizing the Arctic are not in doubt. More natural gas fields are expected to open on the lucrative Yamal Peninsula in the years to come and Rosatom, Russia’s state nuclear corporation, has been given the mandate of developing Arctic infrastructure – and with it a bloom in atomic-powered icebreaking steel.

The Arktika was the lead vessel in the Project 10520 class, which included which included not only the Sibir, but the Rossiya, the Sovietsky Soyuz and the Yamal as well. all but one of which are now retired.  Its two reactors were designed to propel its 22,920 tons through ice up to five meters thick.

In August of 1977, the Arktika became the  first surface vessel to ever reach the North Pole by sea. The Sovietsky Soyuz followed in those northbound footsteps and bore tourists on the first pleasure cruise to the North Pole in 1990, striking another first for the class. The Arktika then when on in 2000 to become the first non-military ship to spend an entire year at sea without putting into port.

In 1982, following the death of its leader, the Central Committee of the Communist Party ordered the name of the vessel changed from the Arktika to the Leonid Brezhnev, the famously droning and absent-minded Soviet Premier who hung onto power for 18 years.

But the crew of the Arktika decided it had had enough of Brezhnev and refused to abide by the name change.  In 1986, the sailors staged a week-long strike while at sea to make their displeasure known, and refused to answer radio calls if the vessel were referred to by the name of the bushy-browed leader. Later that that same year, the vessel was rechristened with its original name.

After it was retired in 2008, the Arktika’s operational lifetime was used by the Russian nuclear industry to buttress its controversial argument for reactor run-time extensions. Originally designed to run for 100,000 hours, the vessel’s reactors received two extensions, prolonging their lives to 175,000 hours. Atomflot has run most of its icebreakers for extended periods ever since, and last month, the Vaygach nuclear icebreaker surpassed the Arktika’s record by logging 177,205 hours on its reactors.