The start-up date of a Russian-built Hanhikivi nuclear power plant in Finland has again been delayed over safety concerns, marking another embarrassing set back for nuclear energy in Europe as a whole.

Published on January 2, 2019 by Charles Digges 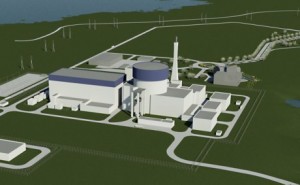 A mock up of the Hanhikivi nuclear power plant. Credit: Fennovoima

The start-up date of a Russian-built Hanhikivi nuclear power plant in Finland has again been delayed over safety concerns, marking another embarrassing set back for nuclear energy in Europe as a whole.

The announcement came shortly before Christmas from the Fennovoima consortium and Rosatom, Russia’s state nuclear corporation, and pushes the beginning of the plant’s commercial operations back to 2028 – four years behind the previous schedule and eight years later than the start proposed when the project initially received the support of the Finnish government in 2010.

The delay is humbling for both the consortium and Rosatom, as both had promised that the project would run on time because it was based on proven technologies.

But the consortium had warned in 2017 that the dual VVER-1200 reactor project could potentially face delays because Rosatom was having trouble getting approval from Finland’s nuclear safety agency STUK, which is notorious as being one of the world’s toughest regulators.

The regulator, like others in Europe, has become even stricter since the Fukushima disaster in 2011, and new regulations stipulate that nuclear reactor cores be built to withstand a direct hit from a crashing aircraft.

Yet Fennovoima had said in June that the planned 1200-Megawatt plant, located in Pyhäjoki on Finland’s northwest coast, would be operational by 2024. As recently as October, Rosatom had echoed that assumption, telling the official Tass newswire it expected its safety clearance by this year. Should the plant become operational, it will be Finland’s sixth nuclear power station.

For now, though, Hanhikivi joins another delayed nuclear project in Finland – the Olkiluoto 3 plant. France’s Areva and Germany’s Siemens are building that plant, but Olkiluoto 3 is now more than a decade overdue, at a cost that’s expected to be three times its original budget.

Other nuclear power plants in France and the United Kingdom have faced similar cost overruns and lengthy delays.

The Fennovoima project was designed to overcome these problems by using a reactor from Rosatom, which continued building nuclear plants after the Chernobyl disaster unlike European rivals. ­But Rosatom has repeatedly failed to satisfy STUK.

Now, says Fennovoima, the plan is for the consortium to receive its construction license and start building in 2021, versus the earlier expectation of this year.

The project has long been controversial because Rosatom is not just a supplier, but also the major shareholder and financial backer of Fennovoima. The Finnish government had to coax Fortum, the country’s leading utility, to take part in the consortium in 2015 to ensure the project had the required number of EU backers.

The Hanhikivi reactor has also been politically divisive. After the project’s adoption, the Green Party quit the then Finnish government in 2014 after Russia’s annexation of Crimea, charging that the project was a case of “Finlandisation,” – a loaded term that refers to a small country adapting its policies to suit a larger, more powerful neighbor.