Russia’s state nuclear corporation Rosatom, has been granted control over the Arctic Northern Sea Route, advancing its aim of becoming the sole operator on what Moscow says – and many other nations believe – is one of the world’s biggest emerging trade routes.

Published on December 19, 2018 by Charles Digges 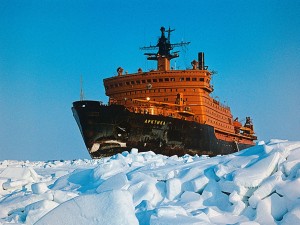 Russia’s state nuclear corporation Rosatom, has been granted control over the Arctic Northern Sea Route, advancing its aim of becoming the sole operator on what Moscow says – and many other nations believe – is one of the world’s biggest emerging trade routes.

But the environmental consequences of such a move are enormous. On top of eroding already retreating ice levels in the Arctic ­– contributing to worldwide seal level rises and the ability of the planet to shield itself from solar radiation – most shipping through the planet’s north would be geared toward bringing new carbon intensive fuels to market.

Yet for months, the power handoff to Rosatom has been talked of as if it had already been accomplished. The bill granting the transfer, which surfaced last November, was said to be favored by President Vladimir Putin. But it wasn’t until last week that the Russian Parliament passed legislation crafted largely by Rosatom itself into law.

Now it’s official. The nuclear monolith, which operates Russia’s nuclear icebreaker fleet, will have full authority over infrastructure, access, security and shipping in the northern waterway as it seeks to open the Arctic for commercial navigation on a year round basis – cutting in half, according to Moscow, sailing times between Europe and Asia.

Russia’s Ministry of Transport, which seemed nearly alone in its opposition to the bill, will maintain its earlier administrative role over the route, but will be answerable to Rosatom as it issues permits to sail thorough it.

The Northern Sea Route runs the some 6,000 kilometers between northern Norway and the Bering Strait, and, until recently, has remained largely impassable during all but summer months. But unusually high temperatures over the past decade have caused the Arctic ice sheet to shrink by some 13 percent, according to data from NASA.

Far from being alarmed by these developments– like the rest of the world – Putin has gone on record numerous times to tout the benefits of climate change and its potential to increase shipping and hydrocarbon exploration in a region that used to be pristine frozen wilderness.

And his administration is making enormous bets on the success of that plan. At a recent meeting in Sabetta, a burgeoning natural gas port on the Arctic’s Yamal Peninsula, Russia’s natural resources minister, Dmitry Kobylkin, pledged nearly $200 billion in investment for Arctic infrastructure over the next five years – only a fraction of it coming from the Russian state budget. The rest, he said, would come from private investment.

Putin himself has not so much suggested as demanded that shipping through the arctic increase. In May, he issued a government decree stating that cargo passing through the northern corridor must go up from its present volumes of about 18 million tons a year to 80 million tons by 2024.

To facilitate that, Maxim Kulinko, the deputy head of Rosatom’s new Northern Sea Route directorate, told the Financial Times newspaper that the state nuclear monopoly will function something like a ride-hailing service, dispatching its nuclear icebreakers as needed.

“We want to be like Yandex taxi for icebreakers,” he told the paper, referring to the Russian analogue to Uber or Lyft. “There should be icebreakers all along the route for anyone to call up and get it to accompany a ship – when the line works regularly, that’s when you have year round shipment.”

To do that, Russia is revamping its aging fleet of nuclear icebreakers. The hulls of three have already been floated: The Ural, the Arktika, and the Sibir, the latter two of which are named for older icebreakers they will replace, and each of which will cost about $1 billion a piece. Moscow has also claimed it will build the Leader class of icebreakers – a slick, space-age vessel that’s even bigger and more expensive than those.

In the meantime, other national shippers have been testing the water for themselves. In August, the Danish shipping giant Maersk sent one of its container ships from the Far Eastern Russian port of Vladivostok to St Petersburg ­– without icebreaker assistance. China’s state owned shipper COSCO has likewise participated in some 30 trial trips of its own. The government in Beijing has been impressed, and since 2013 it has poured millions into port and gas recovery infrastructure in the Arctic.

But Russia is keen to keep the region to itself. Moscow has been steadily revamping many of its mothballed military bases in the Arctic, and, in 2015 laid claim before the UN to the North Pole itself.

But with more authority should come more responsibility. So far neither Rosatom nor other Russian authorities have offered anything in the way of an environmental plan for the Arctic amid the fever speculations about a Northern Sea Route boom. One hopes they won’t forget about it entirely.