Is Russia really offering Norway nuclear assistance, or is the joke on us?

For more than two decades, Norway has spent millions of dollars, in often trying political circumstances, to help Russia free itself from the yoke of its Cold War nuclear legacy. Now, years later, Russia seems anxious to return the favor.

Published on November 13, 2018 by Charles Digges

For more than two decades, Norway has spent millions of dollars, in often trying political circumstances, to help Russia free itself from the yoke of its Cold War nuclear legacy. Now, years later, Russia seems anxious to return the favor.

But it’s hard to tell if Moscow’s recent offer of help was made in jest. The money and the assistance, after all, have usually flowed in only one direction.

Since the Soviet Union’s fall, Oslo has parceled out some $215 million to help Moscow with everything from disposing of decommissioned nuclear submarines to replacing strontium-powered lighthouses in the Arctic with safer solar units.

Norwegian funding had also helped to assure the removal of spent nuclear fuel from Andreyeva Bay, a massive former naval base near Russia’s border with Scandinavia, and assisted Atomflot, Russia’s nuclear icebreaker port, grapple with its liquid radioactive waste. In the civilian energy sector, Norway has injected cash into safety programs at nuclear power plants near Murmansk and St Petersburg.

Yet Russia hasn’t always been a willing recipient of this largesse. The issue of securing Russia’s once feared submarine fleet has for years been the subject of testy negotiation between Moscow and the West, and it has often led to environmentalists being treated as spies.

The Kremlin has frequently viewed these offers of nuclear help as condescending, leading to delicate, time-consuming negotiations in which preserving Moscow’s pride was oftentimes more important than eliminating environmental threats.

In the throes of its lost empire, Moscow has insisted it be considered no less capable of dealing with complex issues of radioactive waste storage than the Western countries offering it funding and help. All too often, the Kremlin has said, the manna of aid has been delivered in the wrapping paper of admonishment and shame. Moscow grew weary of this tsk-tsk approach. After all, it was Soviet know-how that had built the world’s first commercial nuclear reactor, wasn’t it?

Now Moscow apparently sees an opportunity to prove its point.

Last week, Aftenposten, Oslo’s biggest newspaper, reported that Norway’s repository for solid radioactive waste, was violating its license – a possible hurdle to safely storing spent fuel from the country’s two research reactors, as well as cast offs from nuclear medicine. It was a sting to Norway’s reputation as clean and capable in the field of nuclear waste management.

Following the report, Maria Zakharova, spokeswoman for Russia’s Ministry of Foreign affairs, told the official newswire Tass that Moscow had a solution for Norway’s nuclear headaches. 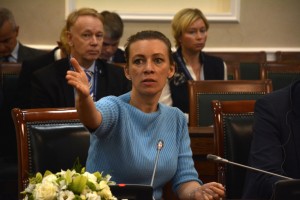 “Given our long experience of cooperation in the field of radiation security, Russia is ready to provide assistance to our Norwegian colleagues in resolving issues with their radioactive waste storage system,” she told reporters in Moscow.

Zakharova, an expert troll, has become the name brand in pointing out European and American hypocrisy. Whenever Moscow finds itself embroiled in an international controversy, she can be counted on to find examples where Washington, London or Brussels has done worse. She sneers and deflects, demurs and denies, always keen to turn the pointing finger back on itself. And she never breaks a sweat.

Zakharova’s remarks on Norway’s repository woes may well have been delivered in that spirit. But some environmentalists, as well as an official at the Norwegian Radiation Protection Authority, are cautiously willing to take her at her word.

Andrei Zolotkov, who heads up Bellona’s offices in Murmansk, saw Zakharova’s offer as a natural topper to decades of mutual toil.

“After all, we have cooperated on nuclear and radiation safety here in the Murmansk region,” he said. “Now Norway needs help. It’s not a bad idea to work together.”

Kristin Elise Frogg, the legal affairs director with the Norwegian Radiation Protection Authority was likewise reluctant to dismiss Zakharova’s comments out of hand.

She told the Barents Observer news portal that cooperation with Russia on the waste storage issue wasn’t necessarily impossible. But she did note that this wasn’t the first time she had heard such offers.

In September, during the annual meeting of a Russian-Norwegian nuclear safety commission, Moscow floated an offer to help Norway with handling spent fuel from its research reactors. Frogg pointed out to the Barents Observer that this was fundamentally different from offering help with the repository.

Yet both Frogg and Zolotkov noted that the offer of nuclear assistance hasn’t yet arrived in Oslo via any of the official channels. Zolotkov was quick to point out that it wasn’t really the foreign ministry’s place to even proffer such a suggestion. That, he said, would fall to Russia’s state nuclear corporation, Rosatom.

When Bellona contacted officials at Rosatom on Tuesday, however, they elected not to comment.

So is Zakharova just having a bit of fun at Norway’s expense? It’s hard to say, but it wouldn’t be out of character.