An official in Finland has insisted that a long-delayed nuclear power plant being built in the Nordic country with the assistance of Russia’s state nuclear corporation Rosatom meet local safety requirements before its licensing.

Published on September 26, 2018 by Charles Digges 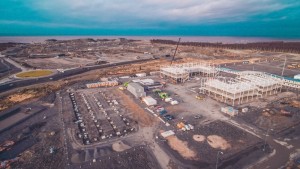 An official in Finland has insisted that a long-delayed nuclear power plant being built in the Nordic country with the assistance of Russia’s state nuclear corporation Rosatom meet local safety requirements before its licensing.

The remarks, from Finland’s Prime Minister Juha Sipila, underscore the often-tense relationship between Helsinki and Russia’s nuclear monopoly over whether the Hanhikivi nuclear power plant is living up to Finnish nuclear safety standards ahead of its expected licensing.

The plant, which is slated for construction in Finland’s Northern Pyhäjoki region, is being built by the Fennovoima consortium, of which Rosatom owns a 34 percent stake. The plant will be outfitted with one of Rosatom’s VVER-1200 reactors, which is the company’s flagship export.

“It is an important project,” Sipila told the Tass newswire, a Russian state mouthpiece. “But it should be remembered that nuclear safety is priority number one as far as the use of nuclear energy in Finland is concerned. That is why the nuclear plant project must meet nuclear safety criteria and this matter is addressed by [our] independent agencies.”

That independent agency is STUK, Finland’s nuclear regulator, which has often raised quibbles with the way Rosatom is doing things.

Permits for the nearly $600 million plant have been repeatedly delayed in the seven years since the contract for the plant was inked, partly because STUK has often said that safety documentation for the build has been incomplete.

The agency has raised numerous concerns, not the least of which focus on the bedrock in the Pyhäjoki region, and whether it is robust enough to sustain a nuclear power plant.

While Fennovoima has been able to address some concerns, officials from STUK said as recently as May that the safety training of staff within the project left much to be desired.

“Safety had not been placed as a primary target, and there has not yet been any major change in that,” Tapani Virolainen, STUK’s deputy director, told the YLE Finnish news network that month.

The fresh stirring of safety concerns by Prime Minister Sipila come on the eve of a meeting he will have with his Russian counterpart, Dmitry Medvedev, who is due to arrive in Finland on a state visit this week, where the plant licensing is expected to be discussed.

Russia evidently expects that Medvedev will return to Moscow with the license in hand.

While Finland has been circumspect about whether the Hanhikivi plant is fulfilling Finnish safety requirements, the Tass newswire went to print with a story suggesting the license was in the bag later on the same day it published Sipila’s less than encouraging remarks.

According to the later report, the Hanhikivi plant is “now at the stage of licensing.” But this rosy projection was not attributed to any official source, but rather “materials prepared in the run-up to […] Medvedev’s visit to Finland.” The article went on to say that the plant would get its license in 2019.

STUK’s safety concerns haven’t been the only impediment to the plant. Finnish lawmakers were originally divided about whether to let Russia build the plant unless the consortium doing it was majority owned by Finland – an apparent nod to the outsized political influence Russia can gain through its nuclear energy projects.

Only an eleventh hour agreement among the plant’s financiers assured that Finnish companies would maintain a majority share in the government – a threshold that led to the project’s narrow approval by the parliament in Helsinki.