Russian officials have said they thwarted a terrorist attack at a facility storing old radioactive components from nuclear vessels located in the Arctic — but don’t worry. It was just a drill. 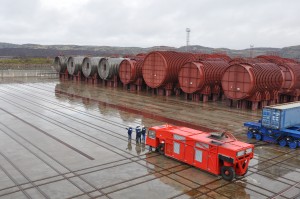 Russian officials have said they thwarted a terrorist attack at a facility storing old radioactive components from nuclear vessels located in the Arctic — but don’t worry. It was just a drill.

The simulated siege was part of a large-scale exercise called Atom-2018, and was meant to prepare workers at the Sayda Bay for the worst – an armed incursion into a sensitive facility within Russia’s vast but fragile nuclear waste storage industry, complete with bombs, hostages and political demands.

According to reports, staff at the facility were alerted to the fact that the exercise was a drill. The purpose of the fake crisis, rather than scaring workers at a radioactive materials storage site, was to prepare officials from Russia’s security services to map out countermeasures specifically designed for the Sayda Bay site.

Sayda Bay is a part of the Murmansk branch of RosRAO, the state operator responsible for the management and storage and handling of non-nuclear radioactive waste, as well as decommissioning nuclear vessels, especially submarines.

Located 60 kilometers from Murmansk, Sayda Bay is itself an old Soviet-era military base. Since 2004, it has been tasked with storing reactor compartments from the dismantled submarines of Russia’s once overwhelming Northern Fleet of nuclear submarines.

Later, facilities were built at Sayda Bay to handle and condition radioactive waste. Currently it houses about 80 single unit reactor blocks and has space for 40 more. Eventually, the site will hold the irradiated remains of the Lepse, a nuclear icebreaker refueling vessels that is carefully being pulled apart at the Nerpa Shipyard near Murmansk.

It was the radioactive waste storage facility at Sayda Bay that was targeted by the would be terrorists. According to a release on the exercise, the assailants seized the facility, took hostages from among its workers, and put forth a demand for regime change. Unless their demands were met, said the insurgents, they would detonate a bomb.

The government security service that were on hand developing strategies to thwart the captors included the Federal Security Service, or FSB, the Emergency Services Ministry, the Ministry of the Interior, Ministry of Defense, officials from the Northern Fleet and representatives of various local government structures.

By way of reassurance, Valery Yeremenko, the director of SevRAO, a subsidiary of RosRAO, said there was nothing in storage at Sayda Bay that could be used to cause a large scale radiation incident.

“It must be understood that there are no radioactively hazardous objects Sayda Bay that terrorists could explode,” he said. “The reactor compartments cannot be exploded with dynamite, either theoretically or practically. A large-scale or even a local radiation accident at this facility cannot happen.”

The most that the terrorists could have done with their dynamite, said Yeremenko, would have been to split open one of the reactor compartments  in storage at Sayda Bay. But he said that would only result in radioactive contamination on an extremely local basis and only for about a matter of minutes.

Drills by security services at Russia’s nuclear facilities is a common occurrence, though in recent years, they appear to have removed the element of complete surprise. In the early days following the fall of the Soviet Union, it wasn’t rare for the FSB to plant fake bombs at nuclear sites unawares, causing panic.