Churning up a wake of mixed emotions, the **Akademik Lomonosov,** Russia’s floating nuclear power plant, set sail from St. Petersburg bound for Murmansk on Saturday, to a flurry of media coverage and the amazement of many who thought the $480 million project would never – and should never – put to sea. 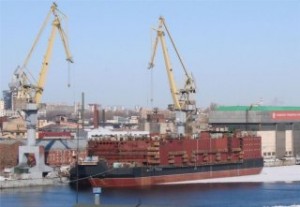 Churning up a wake of mixed emotions, the Akademik Lomonosov, Russia’s floating nuclear power plant, set sail from St. Petersburg bound for Murmansk on Saturday, to a flurry of media coverage and the amazement of many who thought the $480 million project would never – and should never – put to sea.

The 70 megawatt nuclear barge, which wasn’t far out of port before it was dubbed the “nuclear Titanic” and “a floating Chernobyl” by environmentalists, will now proceed through the Baltic Sea under tow to Atomflot, the home-port of the Murmansk-based nuclear icebreaker fleet, where it will be loaded with its uranium fuel

After it has been fueled, the Akademik Lomonosov will continue through the Arctic to the far eastern Siberian port of Pevek, a town of 100,000 people in Chukotka, were Rosatom, Russia’s nuclear corporation says it will go online in the summer of 2019. The plant is expected to replace the energy supplied by the Bilibino nuclear power plant – the world’s four northernmost commercial reactors – which Rosatom will begin decommissioning in 2021.

First, however, the Akademik Lomonosov will have to clear the the craggy 25,000 kilometer coast of Norway, and Oslo, as well as the capitals of other Nordic countries, haven’t been pleased by that prospect. Estonia, which is nearest to St Petersburg, was the latest to complain, saying Monday that its maritime traffic has been disrupted by the Akademik Lomonosov’s enormous supporting flotilla. 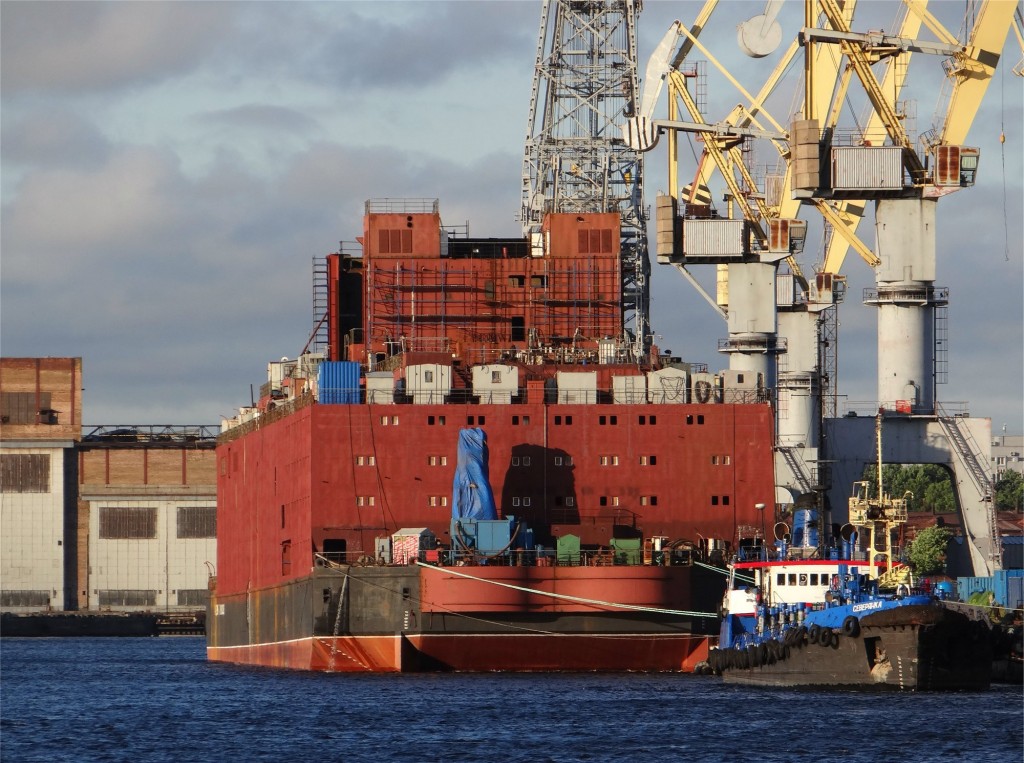 Yet there have been bigger fears. Originally, Rosatom had planned to fuel and test the plant’s KLT-40-type nuclear reactors at the Baltic Shipyard, located in downtown St Petersburg, a city of 5 million people. Public opposition and intervention from Norway’s foreign ministry, however, scuttled these plans, and the reactors will not be filled with irradiated uranium as they skirt Europe’s coasts on their journey north.

But the sailing of the Akademik Lomonsov – two days after the 32nd anniversary of the Chernobyl disaster – caps an era that hasn’t been short on controversy, massive delays, cost-overruns and irony.

In statements over the weekend, Rosatom said the plant – which will provide power not only to the port of Pevek but oil rigs as well – marked a blow against climate change and harmful emissions.

The assertion is the latest uncertain marketing tactic from the company, which for 14 years has sought to justify its massive experiment in alternative used for nuclear power.  Initially billed as an answer for energy needs in hard-to-reach areas, few of the countries Rosatom initially saw as customers for its 140-meter nuclear novelty have rushed to submit orders.

China is said to be pursuing floating nuclear power plants of its own, and only Sudan, which is arguably decades from building an infrastructure that could support nuclear power, seems to be considering a floating Russian reactor.

That lack of interest is likely a good thing. Bellona has long maintained that waterborne nuclear reactors operating in distant, sparsely populated areas create a number of migraines for the environment. Their far-flung locations present hurdles to proper disaster response in the event of a nuclear accident, and their spent nuclear fuel storage capacities are limited.

Floating plants are also far more susceptible to other elements than are their land based counterparts, namely high seas and terrorists on the prowl for the ingredients of dirty bombs.

Rosatom asserted in its weekend statements that the Akademik Lomonosov is steeled against threats like tsunamis, tornadoes as well as other acts of God, but Greenpeace wasn’t buying the reassurances. The group called the plant “a Chernobyl on ice” in reference to its intended use in Russia’s frozen Far East.

Perhaps some solace can be found in the Akademik Lomonsov’s protracted and difficult birth. Its keel was laid at the Sevmash shipyard near Severodvinsk in 2006 in, but the vessel was then moved under hints of scandal to the Baltic Shipyard in 2008.

After arriving there, it was beset by lawsuits, bankruptcy proceedings, property disputes, occasional labor disagreements, budget shortfalls and regular but prolonged delays. When it finally arrives in Murmansk on or around May 20th, it will be a decade behind schedule and cost nearly twice as much as Rosatom initially thought.

Rosatom used the enthusiasm of the launch to cast the Akademik Lomonosov as the first floating plant of many. But over the past few years, a number of anonymous sources from the company have told Russian newspapers they would be happy to see the backside of the costly, fantastically-conceived project.

Now that the Akademik Lomonosov is on the way to Murmansk for fueling, however, the project is only gaining steam. Rosatom can only hope that the date it chose to launch the barge on its northward journey doesn’t eclipse the anniversary it shared.