As Russia races to build a new series of flashy high tech nuclear icebreakers, some of its older Soviet-era behemoths are being pushed to such limits that they are setting unintended records.

Published on March 5, 2018 by Charles Digges

As Russia races to build a new series of flashy high tech nuclear icebreakers, some of its older Soviet-era behemoths are being pushed to such limits that they are setting unintended records.

Late last month, the reactor on the Vaygach nuclear icebreaker steamed past what many thought a near impossible barrier, reaching 177,205 hours of operating time – beating the record set by the Arktika nuclear icebreaker, whose reactor had run for one hour less when it was retired in 2008. That’s 7,383 and a half straight days, or just over 20 years.

The event was widely reported in Russia’s official press, which elevated what had until then been an unremarkable Arctic workhorse to heroic status. Officials from Atomflot, Russia’s nuclear icebreaker port, gushed that the Vaygach’s reactor had well surpassed its projected 100,000 run time on a steady diet of careful maintenance and canny engineering.

The Vaygach was built in Finland in 1989 during the peak years of Mikhail Gorbachev’s Glasnost, and its KL-40 reactor was installed at the Baltic Shipyard in St. Petersburg.

The vessel’s reactor is of the same design Rosatom put aboard its floating nuclear power plant, the Akademik Lomonosov, and much of the official jubilation around the Vaygach’s record centered on this fact – as if to make the dangerous notion of a floating nuclear plant more palatable.

But the event also shows Communism’s culture of giant nuclear icebreakers is at a crossroads. The older icebreaker force that came of age under Soviet rule is grudgingly reaching retirement age, and the roll out of new multi-billion dollar replacements has been slowed by Moscow’s economic struggles, and by western sanctions on the iced over oil fields they are supposed to take part in developing.

Moscow nonetheless insists that icebreakers are instrumental to support its Arctic gas and oil drilling efforts as well as to set guideposts along the little-traveled Northern Sea Route between Europe and Asia, which the Kremlin has long viewed as a new silk road that falls squarely under its control. 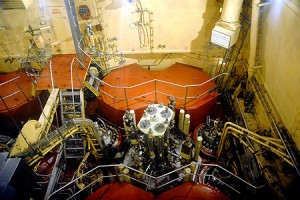 Rosatom, Russia’s state nuclear monopoly, which also answers for Russia’s icebreaker construction, has worked to solidify that grip on the North, writing legislation that will give it full control of developing the Arctic’s nascent infrastructure.

But the icebreakers it wants pave the way job are slow in the coming. Russia has floated the hulls of two new generation icebreakers, the Arktika and the Sibir, which replace their older cousins with the same name, and both aim for a grand scale – at least 50 meters longer than their namesakes. The completion of both, however, has been pushed back numerous times.

Yet Rosatom is eying yet bigger icebreaking feats in the Leader, a massive vessel of a space age design that until this year existed only as rumor. But last month officials announced plans to build at least three of Leader class vessels within the next seven years.

The wait for new ships meanwhile has put pressure on the older ships to perform well beyond their years. The Vaygach’s record came after an environmentally dicey decision in April of last year, when Rosatom granted its reactor a run-time extension to 200,000 hours.

The longer the reactors run, the greater the risk that the Vaygach could suffer a mishap or accident while far from shore, where the hopes that help could arrive in time narrow.

The Vaygach’s sister ship, the Taymyr, whose reactor was built to the same design, suffered a coolant leak while at sea in 2011. The vessel was above Western Siberia when radiant levels spiked, and its crew was unable to manage repairs on it own. It was eventually towed back to port under the escort of two other nuclear icebreakers, the Yamal and the Rossiya, in a rescue effort that took more than a week.

The Vaygach itself has had deep sea incidents as well. The same year as the Taymyr’s reactor incident, a fire swept through its crew quarters, killing two.

Despite these difficulties, Andrei Zolotkov, a nuclear expert with Bellona who spent decades in the Soviet icebreaker fleet,  said there are comparatively few hazards involved with extending these maritime reactors, which is a practice that’s been widely applied to the fleet with no disastrous results

The Arktika and the other the Rossiya, for instance, received a 175,000-hour extension and a 150,000 on their reactors respectively – though extensive overhauls preceded the green-lighting of the reactor’s new leases on life.
The Rossiya has since been taken out of service.

Zolotkov did concede that any extension is accompanied by unknown elements.

“In any circumstances, such decisions are an experiment,” he wrote. “[These extensions] are facilitated by a host of additional safety measures and, usually, more sparing use of the reactor.”

On balance, extending the lifespan of an icebreaker reactor costs about 20 percent of what building a new icebreaker does, Zolotkov noted.