Bowing to a campaign of pressure from Bellona and the Norwegian government, builders of Russia’s first floating nuclear power plant this summer finally agreed not to load its uranium fuel in the middle of St. Petersburg, a city of 5 million people.

Published on August 7, 2017 by Charles Digges

Bowing to a campaign of pressure from Bellona and the Norwegian government, builders of Russia’s first floating nuclear power plant this summer finally agreed not to load its uranium fuel in the middle of St. Petersburg, a city of 5 million people.

Officials with Rosatom, Russia’s state nuclear corporation, had previously planned to fuel the controversial Akademik Lomonosov, as the plant is called, at the Baltic Shipyard – less than two kilometers from tourist meccas like the Winter Palace, the Hermitage and St. Isaac’s Cathedral.

The new venue for loading the fuel is now Murmansk, through which the plant will be towed while en route to the Kamchatka Peninsula via the Arctic.

Adding to worries that a mishap during fuel loading could contaminate much of Russia’s second capital, Norway’s Foreign Ministry was not pleased with the idea of two KLT-40 reactors containing irradiated uranium fuel skirting its 25,000-kilometer coastline while the plant is hauled to the Chutkotka Autonomous Region on the Pacific. 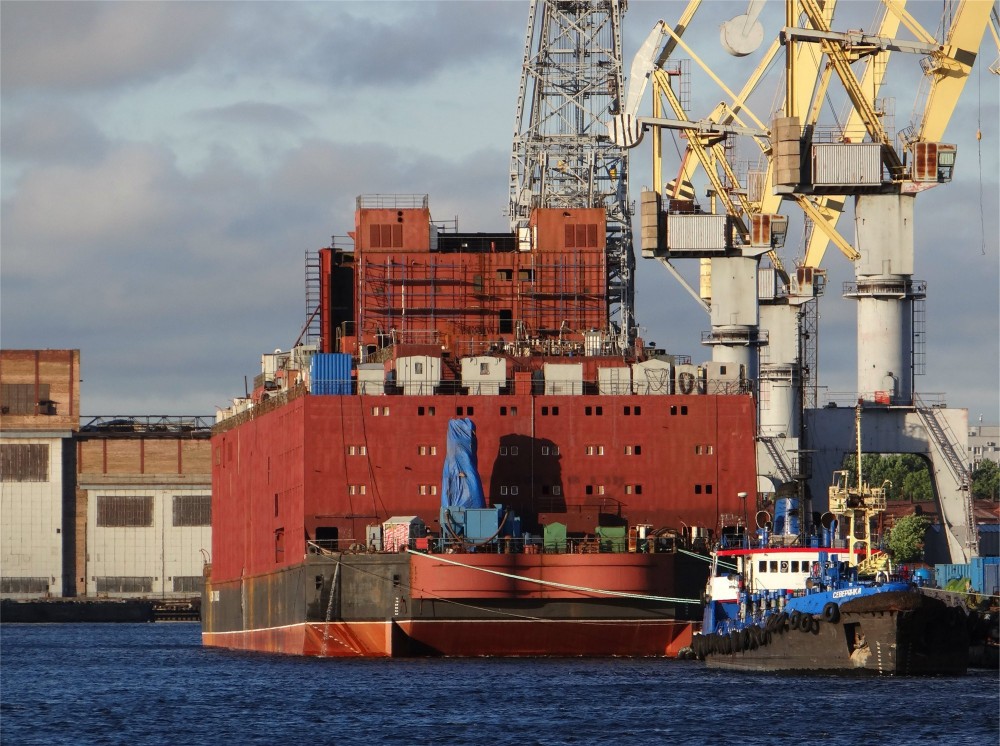 A fire that broke out aboard the plant in June at the Baltic Shipyard re-channeled fears that the waterborne nuclear station is an expensive misadventure that provides juicy bait to terrorists on the prowl for dirty bomb material as well as a near certain environmental disaster.

Still, Rosatom has clung to hopes that the Akademik Lomonsov, now a decade behind schedule and millions of dollars over budget, will become a lighting rod for foreign customers craving a floating nuclear option. While China is mulling floating nuclear plants of its own, the orders for Moscow’s version have failed to rush in.

In late June, State Secretary Marit Berger Røsland with Norway’s Foreign Ministry raised objections to Russia’s plans to tow the Akademik Lomonosov around Norway after it had been loaded with its nuclear fuel.

Rosatom head Alexei Likhachev responded in a company release on July 21, promising the vessel would be towed to Murmansk for fueling operations.

But the change of heart was the culmination of discussions between Rosatom and Bellona’s Alexander Nikitin that had been ongoing since 2013.

Worries about the eventual fueling of the Akademik Lomonosov had enveloped the project ever since the plant was towed to the Baltic Shipyard from Seveordvinsk – from which it departed under the cloud of a scandal in 2008.

Since then, the plant has been cursed by lawsuits, bankruptcy proceedings, property disputes and protracted delays.

Rosenergoatom, Russia’s nuclear utility dealing with fueling operations, has repeatedly raised the specter of loading the plant’s fuel in one of St. Petersburg’s most densely populated neighborhoods. Last year, the utility vowed to have the plant fueled by the new year, but that deadline, like many others associated with the floating plant, passed unfulfilled.

According to Nikitin, Rosatom itself remained tight-lipped about the prospective fueling operations – so much so, in fact, that until last spring, he thought the company might be fueling the plant on the sly.

If such were the case, he hoped the Baltic Shipyard, which has built several of Russia’s nuclear icebreakers, could be relied on to safely load the fuel.

In May, however, Nikitin delivered a stinging presentation to a Rosatom public policy conference in which he recited a number of Soviet era fuel loading mishaps and the impact something similar could have on St. Petersburg. 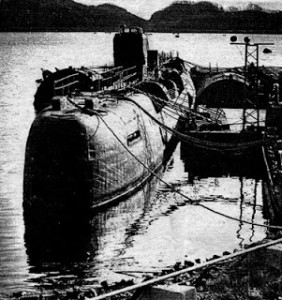 The Echo II class nuclear submarine after an explosion gutted its reactor at Chazhma Bay in 1985. (Photo: Wikipedia)

One of these was a 1985 explosion during a nuclear submarine refueling operation that blew radioactive debris all over Chazhma Bay near Vladivostok on the Pacific, killing 10 and injuring 49.

Two thousand people were involved in the ensuing cleanup, 290 of which were exposed to high levels of radiation. It was later discovered that the nuclear fuel had rocketed out of the Echo II class submarine and onto neighboring vessels, further onto the shore and into the water. Portions of the seabed are still contaminated even now.

The Soviet government was able to keep the accident under wraps until 1993, but such an event in broad daylight in St Petersburg would hardly go unnoticed.

The Akademik Lomonosov will now most likely be fueled at the Atomflot nuclear icebreaker port in Murmansk, which Nikitin and others say has ample infrastructure to do the job.

But that, too, has its detractors. Murmansk’s population of 300,000 is no less vulnerable to nuclear fallout than St Petersburg, the local environmental group Priroda i Molodezh (Youth and Nature) pointed out on Twitter.

Yet Nikitin noted that during the 1990s, St. Petersburg’s City Hall produced decrees forbidding so-called radioactively dangerous operations within city limits. Because of that, the Russian Navy’s flagship Petr Veliky nuclear battle cruiser, which was built at the Baltic Shipyard, was fueled elsewhere.

Rosatom's mock up of the Akademik Lomonosov. (Source: Rosatom)

There were also, said Nikitin some more cynical political calculations behind the change of fueling venue. With regional elections coming up in September, followed in 2018 by presidential elections, Moscow hardly wants to gift a nuclear disaster to opposition parties in one of Russia’s most hotly contested electoral battlegrounds.

When the Akademik Lomonosov is finally fueled, it will be towed to Pevek on the far eastern Kamchatka Peninsula. There it is slated to replace the nuclear power supplied by the Bilibino Nuclear Power Plant, which Rosatom plans subsequently to decommission.

The Akademik Lomonsov will be Russia’s first-ever floating nuclear power plant, a controversial honor eclipsed only by the Sturgis, designed and launched by the United States in 1967 and decommissioned less than ten years later in 1976.