Wildfires that broke out in a mountain forest near the crippled Fukushima nuclear power plant last weekend are causing worries that radiation from the 2011 disaster might be spread with the smoke, dust and flames.

Wildfires that broke out in a mountain forest near the crippled Fukushima nuclear power plant last weekend are causing worries that radiation from the 2011 disaster might be spread with the smoke, dust and flames.

Eight helicopters from Fukushima, Miyagi and Gunma prefectures were dispatched to Mount Juman in Naime in the north east of the country, where radiation levels have remained high since the Fukushima plant experienced a triple meltdown in the worst nuclear disaster since Chernobyl in 1986.

When these helicopters couldn’t stop the blaze, said the Manichi, local officials summoned help from the Ground Self-Defense Force, a branch of the Japanese military.

The fire was apparently started by lighting in the abandoned area, which the Japanese government has designated as a “difficult-to-return” zone, meaning that evacuees of the initial disaster have not returned home due to persistently high radiation measurements. 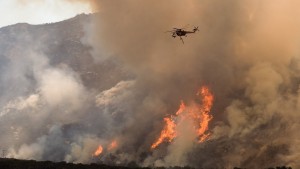 The dangers arising from the fires in the irradiated area are similar to those that Russia and Ukraine combated when wildfires ripped through areas surrounding Chernobyl and the Mayak Chemical Combine during a drought-racked summer in 2010.

Fires around nuclear accident sites can spread radionuclides like cesium-137, strontium-90 and plutonium that can travel with the wind, posing a risk of internal exposure to anyone who might inhale them, said Anton Beneslavsky, a firefighter who worked to extinguish the blazes near Chernobyl, according to the International Business Times.

“This is a health concern because when these unstable atoms are inhaled, people become internally exposed to radiation,” he wrote in a blog post for Greenpeace Russia.

Officials with Japan’s Ministry of the Environment have said radiation measurements in the Naime region have not changed since the fires began.

“We will continue to closely watch changes in radiation doses in the surrounding areas,” a ministry official told the Manichi.

More than 20 hectares of forest on a mountain have burned so far, NHK Japan’s national broadcaster reported on Friday. The fire is gradually spreading due to southerly wind, said the station. The Naime area was under a lightning alert at the time the fires started, the Manichi said.

Wildfires in areas surrounding the world’s most profound nuclear disasters offer unwelcome reminders that radioactive contamination continues well beyond the initial catastrophe. Beneslavsky noted that the fires he routinely fights around Chernobyl arise from campfires with the coming of spring.

“Chernobyl-contaminated forests are ticking time bombs,” said Ludmila Komogortseva, a scientist and politician in Bryansk, Russia, which was heavily contaminated by the Chernobyl explosion.

“Woods and peat accumulate radiation and every moment, every blade of grass burning, every dropped cigarette or campfire can spark a new disaster,” she said. According to Komogortseva and Beneslavsky, the peat accumulated in Bryansk marshes can often be considered a form of radioactive waste.

And now fires in contaminated land can cause difficulties in Japan. At present, 6,000 workers continue efforts to bring radiation hazards at the Fukushima plant under control, and as of this year, for the first time in the past six, they seem to be gaining.

But the plant has been plagued by continuously high radiation readings, especially in the destroyed reactors, and robots are being sent on suicide missions into their nether reaches to determine the condition of the uranium fuel that melted down.

Meanwhile, huge sections of Northeastern Japan are struggling to collect soil, grass and water contaminated by radiation in an effort to make areas inhabitable again. At the plant itself, 1,000 steel tanks store over a million tons of contaminated water, and in the countryside surrounding the plant, there are more than 9 million large black bags packed with irradiated soil and plants. 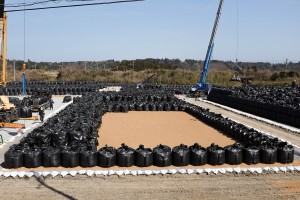 Because Japan has no centralized facility to handle radioactive waste, where this mountain of contaminated soil and other agricultural debris will go remains unknown.

In the longer term, the biggest issue will be what to do with the highly radioactive cores of the reactors themselves. After the Chernobyl, Soviet officials opted to pour concrete over the melted reactor core. But Tepco, the utility that owns the plant, has insisted that Fukushima’s fuel must be removed because the plant’s presence on the coast poses a threat to the ocean environment.

Eventually, more robots that haven’t been developed yet will used to cut up the molten cores of the reactors and seal them inside concrete containers, a process that will take decades.

If Chernobyl is any measure, Fukushima is not expected to be out of the wood for the next 40 years. It was only last year that a huge containment arch was moved into place over the still radioactive rubble of Chernobyl’s number 4 reactor.

With the coming of spring, and more campfires and sping lighting storms, wildfires will continue to ignite fears of nuclear disasters that are failing to recede into the past.