Russia’s first floating nuclear power plant begins tests, but when will it get its uranium?

St Petersburg’s Baltic Shipyard has announced it will begin a series of tests on Russia’s first floating nuclear power plant in a move that could include fueling its two reactors with uranium in the middle of a city of 5 million people.

St Petersburg’s Baltic Shipyard has announced it will begin a series of tests on Russia’s first floating nuclear power plant in a move that could include fueling its two reactors with uranium in the middle of a city of 5 million people.

The prospective fueling operation has drawn the ire of environmental groups and some politicians who say the procedure should be postponed until officials can inform the public about potential dangers. For its part, the city government has not been keen to press Russian state nuclear corporation Rosatom or the Baltic Shipyard over the perceived safety issues.

The Akademic Lomonosov, as the floating plant is called, has been under fitful construction for the last 13 years. Its keel was laid at the Sevmash shipyard near Severodvinsk in 2006 in, but the vessel was moved under hints of scandal to the Baltic Shipyard in 2008.

Since arriving there, it has weathered lawsuits, bankruptcy proceedings, property disputes, budget shortfalls and regular but protracted delays. When it’s towed from St. Petersburg to the Far East port of Pevek on the far eastern Kamchatka Peninsula in November 2019, it will be almost a decade behind schedule and several million of dollars over budget.

When it arrives, it will replace the nuclear power supplied to the remote Chukotka Autonomous Republic by the Bilibino Nuclear Power Plant, which Rosatom plans subsequently to decommission.

Rosenergoatom, Russia’s nuclear utility, announced in May that Akademic Lomonosov would be fueled by December. That hasn’t happened, and the utility has since remained stubbornly silent about when, exactly, the fueling operation will begin.

On Wednesday, the Baltic Shipyard announced in a tweet that the plant was ready for “complex port tests” and that has spurred some to believe the fueling will shortly follow.

Mikhail Amosov, a local lawmaker with the Yabloko party gave the Baltic Shipyard – which has built all seven of Russia’s nuclear icebreakers –­ a vote of confidence for knowing what it’s doing. But he told the Nevsky Novosti news portal that the fueling should take place somewhere besides Russia’s second most populous city, and only a stone’s throw from the Winter Palace. He suggested Pevek, where the residents have already assented to having the floating nuclear plant in their midst.

”We have to exclude even the thought of an accident,” he said. 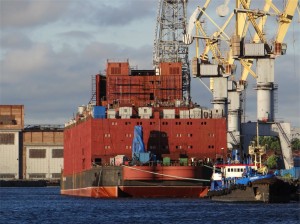 But the thought of an accident during fueling isn’t what bothers Andrey Zolotkov, a nuclear advisor with Bellona in Murmansk. He pointed again to Russia’s nuclear icebreakers – both their construction at the Baltic Shipyard, and their frequent refueling in icy seasons at Atomflot, their port, which itself is only four kilometers from Murmansk and its population of 300,000.

“Of course, its better to fuel away from populated areas, but let’s look at what we really have – all of the icebreakers besides the Lenin and Sevmorput left the Baltic Shipyard with functioning nuclear energy installations,” he said, and added that none of Atomflot’s refuelings have ever resulted in an accident.

“Personally I don’t have any basis to fear these operations at the Baltic Shipyard,” he said.

For Zolotkov, the danger begins when the Akademic Lomonsov leaves St Petersburg for Pevek. That’s because the plant will leave not only with its reactors fueled, but also with more fuel to keep it running.

Neither Rosatom nor Rosenergoatom have publicized whether the plant’s two RITM-200 reactors will be at minimum capacity while they make the 9000-kilometer journey to Chukotka pulled by tugboats and accompanied by an icebreaker, or whether they will be idled.

At present, Zolotkov said, “officials are only speaking in general terms, without revealing the sequence and duration of the tests.”

And they are bound to be extensive; Zolotkov said they should include all systems from how the reactors will produce electricity once they reach Pevek, and how they will supply power on the floating plant “down to the functioning of the toilets.”

“Any malfunctions in any mechanism will have to be fixed at the shipyard ­– not in Pevek or in Murmansk,” he said.

Once in Pevek, even greater concerns bloom. Bellona has long maintained that the port’s far-flung location makes the floating plant a sitting duck for terrorists. Any accidents aboard the Akademik Lomonosov in such a remote location, where proper containment would be difficult, would be withering for the environment.