Russian officials project a fivefold increase of traffic through the Northern Sea Route by 2022 and insist that newline nuclear icebreakers will lead the way even as they roll off the assembly line late.

Published on April 4, 2017 by Charles Digges 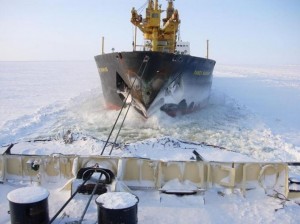 Russian officials project a fivefold increase of traffic through the Northern Sea Route by 2022 and insist that newline nuclear icebreakers will lead the way even as they roll off the assembly line late.

But a drastic slump in recent years of ships travelling along the storied Arctic passage casts doubt on these optimistic projections and call into question the need for expensive new vessels to guide customers along the way.

Along with this officially sunny uptick, Vasily Osmakov, Russia’s deputy minister of trade and industry, said the new-line nuclear icebreaker, the Arktika, would finally be ready for action by 2019 after continuous delays.

Russia has long touted the Northern Sea Route as an economic boon, especially now as climate change progresses and melts more of the ice cover that has made passage a challenge. Speaking at the same conference, President Vladimir Putin embraced climate change as an inevitable deterioration having nothing to do with human activity, but said that will be profitable for Russia all the same.

The route further advertises a significant reduction in time for voyages between Rotterdam and Shanghai by 35 percent.

But even as Russia sees a profit in melting ice, the Northern Sea Route still remains a hard sell when compared its main competitor, the Suez Canal. And that’s precisely because of the ice.

Transit through the route is regulated by the Russian Federal Administration of the Northern Sea Route, which requires ship owners to have Polar Code certification. In recent years, some 4 percent of applicants for passage were turned away for lacking that certification. 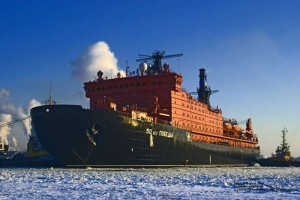 But in recent years, icebreakers out of the Atomflot port in Murmansk have been tied up in the construction of the Yamal liquefied natural gas project and the Port of Sabetta, making them less available to commercial shipping operations. Other icebreakers, like the Sibir, have been taken out of service because of age, and more are to follow.

Osmakov told the Arctic conference that after the roll-out of the Arktika, two other icebreakers would follow; the Yamal, and a second called the Sibir, to replace the first. The newline icebreakers – called project 22220 – are billed as the largest ever, able to break through ice three meters thick and navigate river tributaries to the Arctic.

But like most big projects in Russia’s flagging economy, the icebreakers are running into budget shortfalls and sanctioned supplies. The Arktika was supposed to go into operation in 2017, and its two cousins are scheduled to sail out of their shipyards in 2020 and 2021.

Even if they do show up on time, whether or not they will be needed to field an explosion of customers plying the Northern Sea Route is questionable, despite Rogozin’s rosy predictions in rising cargo weights.

That’s mostly because Rogozin’s statistics are skewed. While he’s correct that some 7.4 million tons of cargo carried by 19 vessels were floated on the Northern Sea Route in 2016, only six of those actually made the entire 6,000-kilometer passage from Europe to Asia.

And while there was a 35 percent jump in traffic between 2015 and 2016 – mostly accounted for by oil shipments – the traffic figures when compared to 2009, after a rapid and noted decline of sea ice in the Arctic, are in a dramatic slump.

That year, transits through the Northern Sea Route hit a towering 71, with 25 of those being flagged to countries other than Russia and running the whole distance of the Europe-to-Asia passage.

Part of that is due to a sharp decline in the price of commodities, one of the cash cargo crops through the route. When those prices drop, shippers pile their goods on larger ships – instead of on the smaller, ice-hardened vessels certified to sail through the Arctic.

Then there is the price of gas. As prices for the bunker oil fueling ships dipped in 2016, fewer shippers saw the point of trying to whittle down gas prices by sending vessels through the Northern Sea Route, especially when their savings would have been eaten up by high tariffs for icebreaker led convoys.

Even if commodity and bunker oil prices bounce back, the plans Russia has presented are less focused on building an international sea super highway joining Asia and Europe than they are in pumping up domestic oil and gas port infrastructure. When the new icebreakers do show up, they’ve already been contracted by Atomflot to the Yamal gas project – the same place that’s already bleeding Russia’s available icebreakers away from escorting international cargo shipments – for the next two decades.

But it’s not as if the Northern Sea Route is actually faster. According to a study a report by the Danish Institute for International Studies, the route takes the same, if not more, time to traverse between Europe and Asia as does the Suez Canal. Vessels going that way, then, will continue to be slow boats to China, icebreakers or not.