The mystery surrounding a release of iodine over Europe in January deepened earlier this month as a second minor spike of radiation again tripped sensors in Svandhovd, Norway, the Barents Observer reported accurately in an article that will doubtless be followed several false ones from other sources.

The mystery surrounding a release of iodine over Europe in January deepened earlier this month as a second minor spike of radiation again tripped sensors in Svandhovd, Norway, the Barents Observer reported accurately in an article that will doubtless be followed several false ones from other sources.

The new spike, according to instruments monitored by the Norwegian Radiation Protection Authority, was measured between March 6 and 13, and, according to Bellona physicist and general director Nils Bøhmer, strongly suggest the iodine release is ongoing.

Measurements released by Finland a week earlier and reported by the news portal tend to support the notion of an ongoing release of iodine coming from somewhere – but just where remains unclear.

As such, the iodine measurements have become the stuff of Internet legend and fuel for conspiracies, and the newest reports will likely spur further theories.

Primary among these is the line several Russian news sites and bloggers have taken, which assert that the iodine is coming from Norway’s Halden Research reactor, and which last October suffered a minor iodine release.

That was short lived, didn’t affect the environment, and has since been controlled. Because iodine’s half-life is only eight days, it’s impossible that an October release would still be detectible in the atmosphere, Bøhmer has said numerous times ­– but has seen his comments fall on deaf ears.

A Twitter fire that started in Europe ­– after the reports of the iodine were confirmed by French nuclear authorities in January– spat out 140-character speculation that a nuclear bomb test in Russia, or even an accident at the Kola Nuclear Power Plant, were to blame. The theories were immediately debunked by Bellona and the Barents Observer.

Russia’s guns were loaded for this. Its state news agencies began pumping out alternative facts to retaliate for the tweets. They blamed Ukraine for the radioactive release and made up quotes from European news agencies to do it.

The Kiev-based fake news debunking site Stopfake.org – which is devoted to ferreting out phony reports on all manner of calamity blamed on Ukraine by the Russian press ­­– spotlighted an article in RIA Novosti, one of Russia’s most influential news agencies.

RIA Novosti falsely cited reports in Britain’s Independent and the Barents Observer to make its case that the suspicious radiation spike was coming from Ukraine. Neither one of those outlets ever reported any such thing.

Germany’s Deutsche Welle news agency was drawn into the controversy when it was falsely credited by Russia’s Operativnaya Linya online newspaper with blaming Ukraine’s Southern Nuclear Power Plant for the iodine. Deutsche Welle had likewise never said anything of the kind. 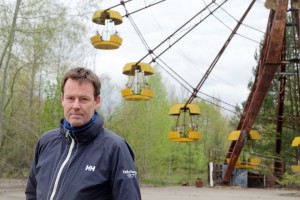 Despite the better ­– and mostly worst ­– efforts of the press, where the iodine is coming from is still not clear.

But nuclear authorities in Finland and Norway are taking the work of trying to triangulate its source seriously.

STUK, the Radiation and Nuclear Safety Authority in Finland, reported iodine 131 measurements in monitoring stations in Rovaniemi that measured at 0.3 microbecquerels per cubic meter of air. Those measurements were taken in February.

Norway has no measurements for the period reported by STUK, but its March measurements showed the iodine traces at 0.35 microbecquerels. Interestingly, Norway reports that iodine wasn’t measured anywhere else in the country during that period.

Bellona’s Bøhmer – who himself has been falsely credited recently with heralding radioactive calamity ­­– reluctantly called the repeat detection of iodine “serious.”

“If it is iodine-131, it is serious because that likely means a continuing release still going on. Iodine-131 has a half-life of only 8 days, so what was measured in January is long gone,” he said.

A similar mystery arose in 2012 when another strange bloom of iodine was detected over Europe. After running the less hysterical fake news gamut of a more innocent age, the source was eventually determined: Budapest’s Izotop Intezet medical isotope facility.

A similarly innocent source will most likely be revealed at the culprit in the most recent iodine release, but not before the Internet explodes in a new mushroom cloud of speculation.