Russians know the frustrations of “heating season.” It’s the time of year – too often coming after the mercury has plunged – when authorities switch on aged boilers to pump steam heat into radiators to warm apartments, schools, factories and offices to fend off the same winter chill that drove off Napoleon.

Published on December 15, 2016 by Charles Digges 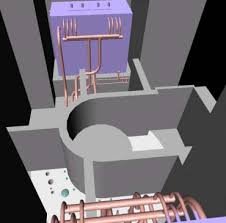 A design of the VK-300 reactor from reactors.narod.ru.

It’s the time of year – too often coming after the mercury has plunged – when authorities switch on aged boilers to pump steam heat into radiators to warm apartments, schools, factories and offices to fend off the same winter chill that drove off Napoleon.

It’s also the reason Russians traditionally prefer big coats. Communal heat, uncontrolled by a thermostat, frequently gets stuffy, and pulling off layer after layer whenever you go indoors is impractical.

Heating frustrations large and small have led a handful of Russian cities to consider the nuclear option – and the Dollezhal Research and Development Institute of Power Engineering, known as NIKIET, has gamed out the first strike.

NIKIET’s chief engineer, Yury Kuznetsov, speaking at the “Forum Dialog” hosted by state nuclear corporation Rosatom last month, laid out a plan for small reactors in cities to supply heat and power by 2020 or 2030. 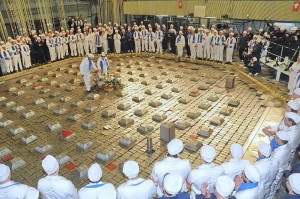 A reactor launch as pictures on http://masterok.livejournal.com/.

The institute’s feasibility study, summarized this week by World Nuclear News, came in response to a directive from Moscow to improve district heating countrywide.

Fifty percent of the residents of Arkhangelsk in Russia’s Northwest reportedly want the reactors, Kuznetsov said. He added that the reactor would also work well in Murmansk and 12 other cities to heat dwellings and keep the lights on during long, dark winters.

NIKIET found the reactors would be cost effective, and would perk away at a rate of return that’s 1.6 times higher than their fossil fuel counterparts when financed by a city at 5 percent. Kuznetsov concluded that 38 VK-300 type reactors could be easily deployed at 14 sites.

The system of old communal boilers relies on fossil fuel and they supply up to 250 megawatts of energy.

Kuznetsov said the boiling water VK-300s have a 750 megawatt thermal capacity and 150 megawatts electric depending on the mix of heat and power that’s needed, WNN reported.

They would use fuel elements similar to Russia’s water pressurized VVER series reactors.

And they also feature fully passive cooling and safety features that don’t require an operator’s presence in an emergency or for offsite water supply.

Kuznetsov said the VK-300s have two containments, and that any accident they experience “should not” extend beyond the sites where they are installed.

Even though Kuznetsov revealed NIKIET’s plans to Rosatom’s 11th “Forum Dialog” event, questions from Bellona to its nuclear experts who were there elicited surprise and a little dismay – raising questions as to what kind of dialog the annual event actually inspires.

Andrei Ozharovsky, a Moscow-based nuclear expert with Bellona, said the plan for the VK-300s resembled a far earlier project undertaken by NIKIET in 2000.

That design, also called the VK-300, was developed as the foundation for an alternative power source for the Mining and Chemical Combine in the closed city of Zheleznogorsk. The plutonium production reactor, which also supplied heat to the central Siberian closed city, was closed in 2010.

“That is, it’s an old, pre-Fukushima project,” Ozharovsky said in an email. “Essentially it’s sketchy – to say they’ll be ready to build them within some four years is a little early.”

Kuznetsov did say in his presentation that the VK-300 was originally designed to stem heating problems that would arise when another nearby plutonium production reactor was shut down at the Siberian Chemical Combine in 2008.

But the plan Kuznetsov presented, said Ozharovsky, squares with recent trends at Rosatom to push reactor development in the direction of heat production.

Andrei Zolotkov, a nuclear adviser with Bellona in Murmansk, called NIKIET’s new project an “interesting return to the Soviet Slogan of ‘a peaceful atom in every hut.’”

He said that the study’s focus on Murmansk and Arkhangelsk, as Ishevsk, Ivanovo, Kazan, Khabarovsk, Komsomolsk-on-Amur, Kurgan, Perm, Tver, Ufa, Ulyanovsk, Vyatka and Yaroslavl was focusing on cities that didn’t have the right infrastructure for reactors. He said Moscow and St. Petersburg would be better suited to have them.

But Zolotkov said that a decision to use these reactors should be taken by individual cities and not mandated by the government. And as far as he was concerned, Murmansk shouldn’t accept one, and NIKIET could keep them.

“Let NIKIET start with itself and put a two chamber reactor installation up for its own communal services,” he said.