Environmentalist split on what constitutes ‘constructive’ cooperative at Rosatom forum

MOSCOW – As an industry forum dedicated to constructive cooperation between state nuclear corporation Rosatom and the public wrapped up here on Wednesday, environmentalists were divided about what that cooperation would look like.

Published on November 23, 2016 by Anna Kireeva, translated by Charles Digges 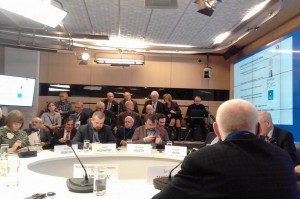 MOSCOW – As an industry forum dedicated to constructive cooperation between state nuclear corporation Rosatom and the public wrapped up here on Wednesday, environmentalists were divided about what that cooperation would look like.

Bellona surveyed participants about who “constructive” environmentalists were, and what would make up the dialogue and cooperation Rosatom espoused at the conference, and what this invitation meant.

Those who were asked answered carefully, and chose their words with deliberation.

Speaking about cooperation between Rosatom and interested stakeholders, Andrei Polosin, the deputy head of the corporation’s department working with regions, discussed its work with the media, its arrangement of tours, public hearings, and work with municipalities.

“Doesn’t he quantity of these events show there’s dialogue and cooperation?” Polosin said. “You can’t twist the definition. For Rosatom, the formation of dialogue with any sector of the public must be important, even that which doesn’t see the prospect of atomic energy and comes out against peaceful atomic projects – this is also a part of public opinion.”

Polosin said environmentalists couldn’t be divided into “constructive” and “not constructive.”

According to Alexander Nikitin, chairman of the Environmental Rights Center Bellona and a member of Rosatom’s public council, the public’s attitude to nuclear power falls into three categories.

The public speaks out against nuclear power because of its potential dangers, its destructive potential, the real consequences of large-scale accidents, and the pileup of radioactive waste and nuclear materials.

For most of the population, subjects associated with the military industrial complex, nuclear power stations, spent fuel reprocessing and plutonium technologies (like breeder reactors) are unacceptable.

“Regarding public support of such projects, there’s really nothing to say, and the situation will hardly change,” said Nikitin. “There’s a long-standing among the public that it’s worth refusing this technology.”

What is acceptable to society, said Nikitin, is the application of nuclear technology in medicine and science. AS concerns nuclear remediation and dealing with radioactive waste and spent nuclear fuel, the public understands the necessity of doing this.

Speaking about the format of the forum dialogue put on by Rosatom, Nikitin said that all organizations that were interested in cooperating were able to ask their questions and have them answered.

“There are professional environmental groups who are categorically against any nuclear projects, and who can prove their right with facts and figures,” said Nikitin. “But their principles are against participating in forums like this – it’s their position and it deserves respect.

He said, though, that the Rosatom forum didn’t provide especially robust dialogue.

“For that to happen you would have needed fewer speeches and more debate,” Nikitin said. “

“Let them prove nuclear energy is economical,” said Nikitin. “Lay out statistics on construction, use, lifespan extensions, decommissioning, and radioactive waste management and compare that with other forms of energy – then we’ll talk. All else is manipulating figures.”

Alexei Toporov of Tomsk’s Greeen Cross and Siberian Ecological Agency, said the forum dialogue wasn’t all just glitzy window dressing. He was concerned that so many professional environmental organizations had been tarred by the government as foreign agents and that they were under fire.

“Nevertheless, there was dialogue here,” Toporov said. “Avid opponents just don’t fit the format of constructive cooperation. Other critics, like me, are here – I’m a proponent of reasonable decisions, not a proponent of atomic energy.”

He said constructive dialogue was possible when people listen to each other and come together to find solutions.

“The ‘I am against it and don’t want to listen to the other side’ approach is not constructive,” he said.

“There’s no need to concoct what isn’t there and discuss the plight of foreign agents,” said Alan Khasimov of the environmental group OK. “Russian nuclear technology is safe and competitive. We ourselves are convinced of that and actively disseminate our objective information.”

Menshikov said that even if opposition NGOs had shown up, they wouldn’t have been given any time to speak.

“The lack of time for debates and observations is a reproachable form of manipulation, one way to avoid serious discussion when one side expressed apprehension about what Rosatom bureaucrats are doing,” Menshikov said.