MURMANSK – Despite the fact that the Kola nuclear power plant produces 500 megawatts of unneeded energy per year, Russia’s nuclear utility Rosenergoatom is holding a tender for upgrades to the station’s No 1 reactor — with the aim of running it for 60 years.

Published on March 27, 2016 by Anna Kireeva, translated by Charles Digges

MURMANSK – Despite the fact that the Kola nuclear power plant produces 500 megawatts of unneeded energy per year, Russia’s nuclear utility Rosenergoatom is holding a tender for upgrades to the station’s No 1 reactor — with the aim of running it for 60 years.

According to the Goczakupok, the state’s official site for open tenders, Rosenergoatom is billing the work for nearly 700 million rubles ($10.3 million) and the upgrades are to take place between June 1, 2016 and October 1, 2018. Candidates for the project, says the site, are being accepted until April 4 and the winner will be announced by May 4.

Vasily Omelchuk, the plant’s director, says that the foreseeable future holds no possibilities for other energy development, be it in the form of new hydroelectric stations, renewable sources or even the construction of a second Kola nuclear power plant.

“Therefore the engineered lifespans of reactors No 1 and 2 were extended by 15 years to 2018 and 2019,” said Omelchuk. “The station has worked out an investment plan to extend the lifespan of it reactors generally to 60 years, or for 15 years a piece,” he told an ecological gathering of the Murmansk Regional Government and the Public Council on Atomic Energy. 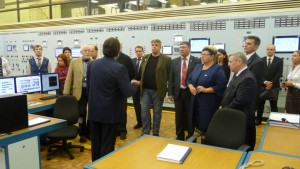 The station’s reactor No 1 this year reached 43 years old. All four of the plants reactors are working on extended engineering lifespans, and each was initially designed expected to run for 30 years.

“When making important decisions in Russia’s nuclear industry, they look at the economics first and foremost,” said Alexander Nikitin, chairman of the Environmental Rights Center Bellona. “Other questions like safety come later.”

Nikitin said the nuclear industry had tallied up the cost of building a new €5 billion reactor against the cost of a €10 million extension and opted for the later. He added that reactor decommissioning costs would run another €1 billion

“So having invested €10 million or even €20 million into lifespan extensions, this one will run until 2030,” Nikitin said.

Nikitin said the station’s management is not so concerned with safety because of simple logic. In Russia’s financial crisis €5 billion for a new reactor in the Murmansk Region – which already has more energy than it needs – is hard to come by.

“As far as safety issues, apparently they’ll solve them as they come up,” said Nikitin. “The most important thing is to establish monitoring and timely response to any problems that may arise at the reactor.”

That the population of the Murmansk Region  has been convinced that extending the run-time of the station’s oldest reactor makes it safer is suggested by something else: Rosatom’s website for state tenders has received bids to advertise for the Kola plant amounting to 1 million rubles (€13,200) from one regional broadcaster and nearly a million and a half (€20,000) from another.

“I’m very concerned with the fact that the oldest reactor at the station is getting prolonged again,” said Nils Bøhmer, Bellona’s executive director and nuclear physicist. “It’s outdate technology, a very old reactor and I’m afraid that the decision will significantly increase risks of an incident.”

This year, public hearings will take place to determine whether Kola’s No 3 reactor can be run at above nominal power levels of up to 107 percent. Station officials thus far haven’t offered an articulate answer as to why this is necessary.