The sinking of the Kursk nuclear submarine 15 years ago today etched a monolithic capstone to Russian nuclear naval ineptitude that had been trickling to the surface since the fall of the Soviet Union. 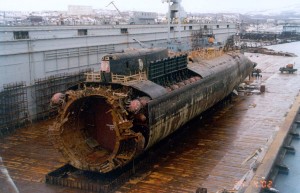 Wreck of the Kursk in a floating dock at Roslyakovo. (Photo: Wikipedia)

The sinking of the Kursk nuclear submarine 15 years ago today etched a monolithic capstone to Russian nuclear naval ineptitude that had been trickling to the surface since the fall of the Soviet Union.

It also marked then-new President Vladimir Putin’s baptism by fire in what was Russia’s still developing free media – a lesson he would not forget, and that would play a central role in his march ever since to roll the country’s news outlets into a government-issued straight jacket. 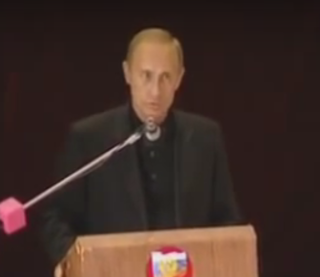 After two decades of joint US-Russian efforts to neutralize the threat of Cold-Warrior submarines, and by turn, minimize a repeat performance of the Kursk disaster, the Kremlin by last year had already outspent the entire cost of these international dismantlement activities with new lines of submarines, the multi-billion dollar Yasen and Borei classes.

“We have lately seen more submarine activity in the Barents Sea and the Northern Fleet has also been equipped with additional submarines,” said Nils Bøhmer, Bellona’s executive director and nuclear physicist. “Based on previous experience, we fear that increased nuclear submarine activity […] could increase the risk of new incidents and accident. This increased activity includes both regular patrol operations and increased naval exercises.”

The Oscar Class Kursk ballistic missile submarine – one of the largest attack subs every built – sank while participating part in broadest naval exercises since Soviet times in the Barents Sea.

An official probe into the accident said one of the submarine’s torpedoes – a torpedo that had never been tested about the sub – accidentally detonated at 11:28 on the morning of August 12, 2000 according to what is available of still classified reports from the listening post aboard the Pyotr Veliky, Russia’s flagship battle cruiser. 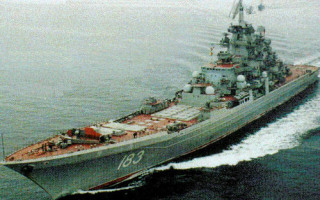 A second explosion was heard minutes later before the Kursk sank in 100 meters of water 175 kilometers from Severomorsk with all 118 of its crew.

Russian military command attempted for hours to contact the crew, but didn’t report anything was amiss until 11:30 pm that evening. The Kursk was located the following morning at 4:00 am, and it became apparent that some of the sailors had survived and holed up in the sub’s 9th compartment, where limited oxygen still remained.

It was around then that the chaotic and friable relationship between the Navy’s spokesman Sergei Dygalo and a stampede of foreign and domestic media began.

While reporting on the Kursk accident from Murmansk for The St. Petersburg Times, I recall Dygalo’s first briefing at 6:00 am on August 13th as mayhem. Reporters staying in Murmansk’s Polyarny Zory hotel received 5:00 am phone calls inviting them to the presser.

Journalists at the over-packed conference set up television cameras on tables and fired questions at Dygalo from perches on widow sills. Would Putin, only a month into his first presidency, return from his vacation in Sochi to oversee the disaster response? And what of reports that hammer blows were being heard in the bowels of the wrecked submarine?

Dygalo tried to cope with the onslaught, but within 10 minutes threw his briefing papers into the air and walked out. 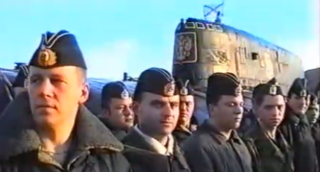 For more than a week the world held its breath as the Russian Navy launched one failed attempt after another to rescue the surviving sailors. The Navy’s mechanism for coupling a rescue sub to the Kursk’s escape hatch wouldn’t take. Russia rebuffed offers of assistance from other nations.

By August 29, when Norway was finally allowed to send in its own rescue sub and divers to open the hatch – accomplishing in less than an hour what the Russians couldn’t do in a week – it was too late.

As my former Times colleague Robert Coalson pointed out in RFE today, ORT’s then star, Sergei Dorenko, closed a documentary on the Kursk tragedy by saying: “The main conclusion is that the government does not respect any of us – and so it is lying. And the main thing is that the government treats us this way only because we allow it to.”

That such words would be heard on ORT today is unthinkable. But one event prior to Dorenko’s documentary showed the nascence of Putin’s blunt-edged damage control machinery.

When Putin finally surfaced on August 22 in Vidyayevo, the Kursk’s dilapidated homeport, to console the town’s new widows, orphans, and bereft mothers, he was met instead with seething rage.

Relatives were in no mood for succor from a Kremlin that had spent critical days wriggling and lying. One woman, Nadezhda Tylik, despairing the loss of her son Sergei, screamed to the hapless Putin, “You’re swine.”

“They’re dying down there in a tin can for $50 a month and you don’t care,” she continued. 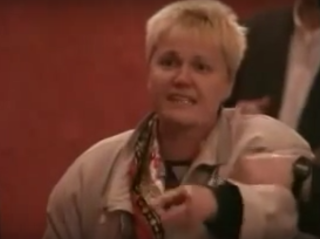 Immediately, a woman sidled up behind Tylik and plunged a syringe of sedatives into her side. The grieving woman collapsed and was spirited out. A Russian TV crew that was allowed into the port caught the event. The footage enraged international audiences but never aired in Russia. Vidyayevo Naval officials confirmed to me on August 25, 2000 that the injection had indeed been intended to shut Tylik up.

It was at this meeting that  Putin chose who was to blame for the Kursk disaster: the oligarchs who owned Russia’s independent media.

“There are people in television today who … over the last 10 years destroyed the very army and fleet where people are dying now… They stole money, they bought the media and they’re manipulating public opinion,” he offered the stricken families by way of condolences, according to the Guardian. When asked why he’d waited so long to return from his Sochi vacation after learning of the disaster, he insisted: “They’re lying. They’re lying. They’re lying.”

He further blustered he would punish media owners for trying to discredit him, and would derail their attacks by creating alternative “honest and objective” media, the Guardian continued.

The war had begun.

By April, 2001, NTV, oligarch Vladimir Gusinsky’s swashbuckling news organization, was in the hands of Gazprom, Russia’s natural gas monopoly and a corporate state within a state, and Gusinksy himself was facing tax evasion charges, which were later dropped. 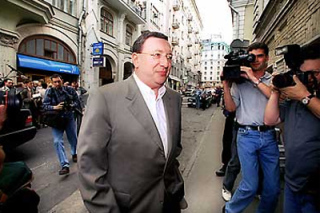 Voices from beyond the watery grave

The drama darkened in October 2000, when Vice Adm. Mikhail Motsak, then head of Russia’s Northern Fleet, revealed that 23 sailors had survived the blasts heard aboard the Kursk and subsisted on the 9th compartment’s oxygen for perhaps as long as two or three days – ample time for a rescue operation to have worked.

Testimony to their slow deaths had been found on their remains: They’d been writing letters to their loved ones by the light of dimming flashlights that trailed off as the scribes were overtaken by hypoxia.

The most haunting testament to the ordeal was penned by 27-year-old Lt. Captain Dmitri Kolesnikov, the commander of the turbine room. 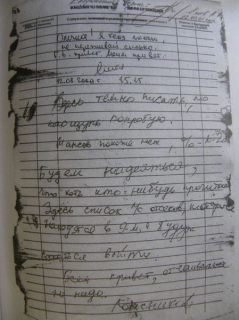 “All personnel from compartments six, seven and eight moved to the ninth. There are 23 of us here. We have made this decision as a result of the accident. None of us can get out.”

With the epistolary revelation, the Kremlin’s lie that all aboard the Kursk had most likely died instantly was stripped away.

What the Kursk’s autopsy revealed

The Kursk was finally raised in 2001 and after a year-long investigation, it was confirmed the torpedo malfunction was to blame, again giving the lie to several semi-official rumors about a US sub downing the Kursk, or that it collided with another vessel or an abandoned World War II mine.

The Russian media that had come of age raucously dismantling the intrigues and corruption of Boris Yeltsin’s palace valiantly peeled away Putin’s curtain of evasion, deception in the face of his first national crisis, albeit with more tangible pushback from Russia’s old spy-master.

For the rest of his first two administrations, Putin would rarely lose face, certainly not as spectacularly as he had in face of Nadezhda Tylik’s grief.

Under Putin, the harassment and even murder of journalists, notably Anna Politkovskaya, had become routine. By 2009, reporters and editors sent a broad appeal to the Kremlin asking that the violence being visited on them stop – or at least be prosecuted.

Activists and NGOs have fared no better. With the passage of a 2014 law demanding NGOs receiving foreign funding and engaged in vaguely defined “political activity” register with Russia’s Justice Ministry as “foreign agents,” Putin sought to turn civil discourse into sedition.

Don’t mess with it if it’s not broken

If Putin wishes to maintain his soaring approval ratings, brought to the Russian pubic courtesy of state television, there’s little purpose for him to reverse any of the smoke and mirrors legerdemain he learned from the Kursk disaster as a freshman president.

Indeed, a poll by Russia’s Levada center published in The Moscow Times shows that 40 percent of Russians now think Putin handled the Kursk disaster right, compared to 34 percent in 2010 and 23 percent in August 2000.

Other sub disasters have occurred on Putin’s watch, but consequences have been limited.

The sinking of the derelict K-159 while it was being towed to dismantlement in 2003, killed nine of the 10 sailors aboard, and was hailed by Russian media as the Kursk’s little brother catastrophe. The 800 kilograms of highly enriched uranium in its reactors have been inspected for leaks by joint Russian Norwegian expeditions. 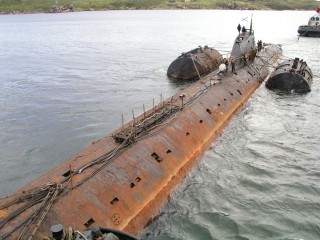 Since 2011, four nuclear submarines caught fire, one while it possibly still had nuclear weapons onboard, while under repair at shipyards owned by the state’s Unified Shipbuilding Company. The fires killed nine.

Meanwhile Putin lauded the sea trials of the Severdvinsk, Russia’s most expensive submarine ever, weighing in at $2.2 billion. That’s part of the $659 billion slated by the

to bring 10 new submarines into service in the Northern Fleet.

Putin has said these new subs are needed to establish Russia’s predominance along its continental shelf to bring undersea oil and gas to market, something Putin is pinning Russia’s economic salvation on despite downwardly spiraling oil prices.

But as his skills at obfuscation and misdirection have been well honed since the Kursk crisis, there’s little doubt he can avoid responsibility for an economic tank as well.