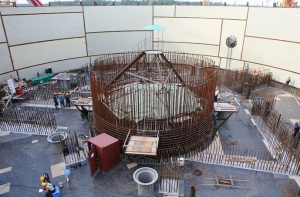 The LNPP 2 under construction (Photo: Wikimapia)

Deputy Russian Economic Development Minister Nikolai Podguzov approved a plan to put the commissioning of reactor No 1 at the Leningrad Nuclear Power Plant Phase II, reactor No 2 at the Novovornezh NPP Phase II and the No 1 reactor at the Smolensk NPP Phase II, the oil.ru news portal, citing financial newspapers reported on May 27.

Podguzov cited an energy surplus as reason for what he called the “rather significant” delay in starting the new power units. “We have at a very high level of coordination found that there will be rather significant shifts in commissioning atomic energy blocks, which, in the current circumstances of surplus energy are simply not needed at the moment,” he said according to the Prime economic news portal.

“In agreement with all executive bodies together with Rosatom, our prognosis is there will be a very significant delay in commissioning the reactors,” he said.

Podguzov’s statement s confirm an April announcement by Alexander Lokshin, Rosatom’s deputy director general for operations management that the corporation has postponed by one year the target dates for commissioning the reactors and Leningrad and Novovornezh, World Nuclear News reported. Smolensk’s unit,

Yevgeny Romanov, head of Russia’s nuclear power utility, said in May that Rosatom had postponed the launch of the Smolensk unit until 2027 – which had earlier been planned for 2022, the RIA Novosti newswire reported.

While Romanov cited that the Smolensk delay was in keeping with the newly developed federal “Nuclear Power Plant Construction Roadmap,” and Podguzov said the country had enough power, Bellona’s Alexander Nikitin has suggested Rosatom is simply spending too much money on other things to complete much else.

Finances may play a larger role in postponements

In early May, Nikitin, chairman of the Environmental Rights Center Bellona, suggested that Rosatom’s “Breakthrough” program for developing the BREST-OD-300 fast neutron reactor was only breaking Rosatom’s piggy-bank. The slated commissioning for the experimental reactor is 2020 and is receiving a great deal of Rosatom’s financial and engineering resources, much of it at the expense of other projects.

Other areas where Rosatom finances seem to be circling a drain are in the production of its first Floating Nuclear Power Plant, the Akademik Lomonosov, whose cost has ballooned from $140 million to $740 million as of late May, according to official documents seen by Bellona.

Ecodefence’s co-chair Vladimir Slivyak has likewise written that Rosatom and French state nuclear firm Areva’s competition to build reactors abroad is leading both companies to rely heavily on subsides and puffed up credits to compete – something that’s pushing both company’s balance sheets into the red.

Nils Bøhmer, Bellona’s executive director and nuclear physicist said that the recently announced delays in Russia’s domestic nuclear builds are an indication of the financial paralysis these combined factors are causing.

“This shows that nuclear power is expensive in Russia as well,” he said.

“I think this is the first signal from the Russian nuclear industry that they will reduce their building of new nuclear reactors, both domestic, but also on the international arena,” he said.

One of the largest hidden costs of nuclear plant build outs, he said, were decommissioning costs, none of which ever seem to figure into plant building budgets.

“The focus for the Russian nuclear industry – and the rest of the nuclear world – should be on safe dismantlement of the aging reactor fleet and finding good solutions for storing high level radioactive waste and spent nuclear fuel,” said Bøhmer.

The first unit at the plant, construction of which began in 2008, had originally been planned to start up in 2012. Construction of the second unit began a year later, with a planned start-up date of 2013, although this was subsequently revised to 2015, the agency said.