Rosatom's mock up of the Akademik Lomonosov. (Source: Rosatom)

The documents, published on the government’s appropriations and regulations portal (in Russian) show the government will now be co-financing the project, which was initially headed up by Rosenergoatom, Russia’s nuclear utility. The documents indicate the utility is running short on funds, and so will be receiving taxpayer support, the Russian government’s official print mouthpiece Rossiiskaya Gazeta reported (in Russian).

The FNPP, called the Akademic Lomonosov, is a long-standing prize project of state nuclear corporation Rosatom, which says the barge and its two nuclear 35-megawatt reactors will be a revolution in delivering power to Russia’s far flung regions. Independent sources say 15 countries world-wide are interested in leasing Russian floating nuclear power plants, most significantly China. 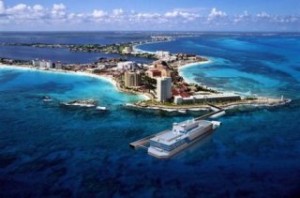 Another rendering of a floating nuclear power plant in port. Credit: http://www.okbm.nnov.ru/russian/lomonosov

The Akademik Lomonsov – after two major release delays and a shipyard switch – was last month slated for completion by 2016, and is expected to be delivered to the Far East port of Pevek in the Chukotka Republic of Kamchatka along Russia’s Pacific Coast by the following year.

The government budget document said that, in order to “guarantee energy and social stability” in Chukotka, infrastructure for the FNPP had to be ready by 2019.“ The document doesn’t comment on the two-year lag-time between the FNPP’s deliver and completion of shore infrastructure to handle it. But it does state the infrastructure can only be built with an infusion of federal budget funds to co-finance it.

Hence the source of the ballooning price tag: The original plan to bring the floating nuclear plant to completion for 9 million rubles was based on the assumption Rosenergoatom would build the necessary infrastructure so the Akademik Lomomosov could actually provide power to Pevek’s 4000 inhabitants.

A photo of one of the Akademik Lomonosov’s reactor chambers. (http://www.okbm.nnov.ru/russian/lomonosov)

The document said 50 million rubles would be allocated toward infrastructure in Pevek for the Akademik Lomonsov, in 2015. Another 5 billion rubles more will follow over the next four years.

Tass, another official news agency computed (in Russian) that the 5 billion ruble budgetary appropriation, plus other costs borne by Rosenergoatom, accounts for the 28 billion ruble rise in the final estimated cost for the Akademik Lomomosov.

Rossiiskaya Gazeta’s report likewise indicated funding for the construction of new generation icebreakers – on which the Kremlin just last year has placed such a high premium – would be slashed to the tune of 10.9 billion rubles between through 2016. This icebreaker funding will be postponed until 2017, and while the official paper seemed to hint the icebreaker delay was tied to the cost spike in the FNPP project, it didn’t state it explicitly.

German Gref, Russia’s former Minister of Economic Development and Trade from 2000 to 2007, was a lone doubter of the Kremlin’s ambitions for FNPPs, saying they were too costly to recoup their construction costs.

As a result of Gref’s past cautions, Rossiiskaya Gazeta put a positive spin on the spiraling costs commenting that, “Calling such a turn of events […] like a four time cost increase an unexpected situation is hardy possible.”

For Nils Bøhmer, Bellona’s executive director, the runaway costs were likewise unsurprising, though he saw nothing rosy about it.

“This is clearly a project without any cost control, and I suspect the price will grow even more if they manage to get this FNPP to float sometime in the distant future,” he said. “I also fear that the cost of operating the plants and dismantling them have also been largely underestimated, which will only add to the final cost.”

The Akademik Lomonosov is a 144-meter barge crewed by 69 with two nuclear 35-megawatt reactors and must be towed to its destination. It has a draught of less than six meters, meaning it can operate in shallow waters. The reactors are intended to operate for 40 years.

It’s construction started in 2007 at Russia’s Sevmash Shipyard, but was moved to St. Petersburg’s Baltiisky Zavod shipyard in 2008.

The Akademik Lomonosov was first scheduled for delivery in 2010. That was bumped back to 2011, and again to 2012. It’s scheduled arrival in Pevek is 2017, Baltiisky Zavod’s director Alexei Kadilov has said Kamchatka’s infrastructure that “lags far behind” to service the plants needs on the frozen peninsula.