Vis menyen
Bellona.org > Latest News > Nuclear issues > Nuclear Russia > Any type of nuclear reactor, regardless of its purpose, is subject to risks

Any type of nuclear reactor, regardless of its purpose, is subject to risks

Even though Norway has no reactors producing electricity, its work with research reactors presents the same risks and complications as to a standard atomic energy station – and the same culture of secrecy surrounding their problems. 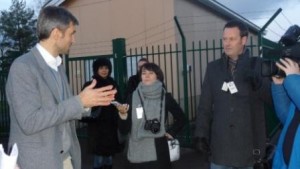 Even though Norway has no reactors producing electricity, its work with research reactors presents the same risks and complications as to a standard atomic energy station – and the same culture of secrecy surrounding their problems.

Norway operates two research reactors. One of them, situated 20 kilometers from the capitol of Oslo, was recently visited by participants in a joint seminar arranged by Bellona and Russian state nuclear corporation Rosatom, called “Russia’s Atomic Energy: Conditions, Tendencies and Safety.”

The JEEP II research reactor is housed at a laboratory at The Institute for Energy Technology – IFE in the Norwegian city of Kjeller. It’s a heavy water reactor, in which heavy water is used as a neutron moderator and coolant. Its maximum thermal power is 2 megawatts. Its heat exchange passes thermal energy to its second chamber via ordinary water, whose heat provides warmth to the institutes neighboring buildings. Surplus heat is released into the atmosphere through a cooling tower. From nuclear power to hydroelectric energy

Viktor Wikstrom, spokesman for the Institute for Energy Technology – IFE, said that Norway has a surfeit of energy, but that nuclear will never be needed for future energy purposes thanks the country’s near 100 percent reliance on hydroelectric.

But following World War II, the country’s government attempted to develop the most cutting edge energy sources, and at that time, that meant nuclear.

“We’re proud that Norway was the first country in the world, following, of course, such nuclear powers as the USSR and the USA, that designed and launched a nuclear reactor,” said Wikstrom, adding that in 1979 through 1980, the Norwegian government turned its back on nuclear power development. “We began developing hydroelectric energy, and then found oil and gas,” Wikstrom said. “Atomic energy caused a lot of problems, specifically environmental ones.”

The institute itself conducts many studies, half of which are to one degree or another devoted to nuclear research for medical purposes, and the oil and gas industry. It also participates in joint projects at the Kola and Leningrad nuclear power plants in Russia, Andreyeva Bay, and Murmansk’s nuclear icebreaker port Atomflot.

“In principle, we’re not against the Kjeller reactor because a lot of important research in many important spheres takes places there,” said Bellona’s Executive Director and nuclear physicist Nils Bøhmer. ”But the work on the reactor has to be safe.”

Spokesman Wikstrom confidently said that the Jeep II reactor had run without incident since it went online in 1967. The Jeep I, an earlier reactor that began operations in 1951, was taken out of service.

However, it’s well know that in autumn of 2006, the Kjeller reactor was stopped after the discovery of radiation spike in the reactor building. The Norwegian Radiation Protection Authority assumed the spike could have been the result of a drop in the radioactive fuel in the water used in the reactor’s cooling system.

Commenting on the issue, Wikstrom said, “there have been incidents [at the reactor] but not anything serious.”

“For example,” he continued, “in 2006, there were no radioactive emissions beyond the building exceeding norms, nor were there any negative consequences for the population. We weren’t even fined by the government.”

Bellona’s Bøhmer said that safety conditions at Kjeller are much improved over those a few years ago.

“Today we were shown one storage unit in which spent nuclear fuel is stored and was developed in the 1940s,” he said. “No one is hiding that fact that corrosion of spent fuel has not left it in the best condition – however, a few years ago, the storage unit wouldn’t have withstood any criticism.”

Bellona’s Norwegian offices invested much effort to change the situation. “The storage unit was indefensible from an environmental point of view, and from the point of view of physical defense,” said Bøhmer. ”We came out against the spent nuclear fuel storage facility […] in the local press and in parliament, and know they’ve erected walls enclosing the reactor.”

By Russian measures, these barriers look small and aesthetically pleasing, and don’t spoil the view from neighboring hillsides.

Bøhmer likewise explained that earlier, radioactive waste (incomparable in quantity to that produced by a nuclear power plant) was simply stored under two meters of dirt without any defensive barriers – against which Bellona in 1993 staged a special demonstration.

“We gathered around the barriers surrounding the perimeter and dug up barrels of radioactive materials,” said Bøhmer. ”This resulted in the construction 10 kilometers from Kjeller of a special storage unit for low and medium level waste, to which they transported the waste that was so inacceptably stored.”

Bøhmer also noted that Kjeller has a reprocessing facility that produced about two kilograms of plutonium. The liquid radioactive waste resulting from the reprocessing was just dumped in a river. As a result, the river bed was coated with plutonium. Likewise, the pipe through which the waste was poured was situated on a shallow river that frequently dried up altogether. Inside the storage unit at Kjeller. (Photo: Bellona)

“To change the situation, we had to close the pipe that they were dumping waste through,” said Bøhmer. ”The company had to collect the contaminated layer from the bottom of the river.”

The pipe is still used to dump radioactive waste, said Bøhmer, ”but the quantity of radioactive substances is now significantly less.”

Bøhmer said the research conducted at the center was ”desireable and needed” but that it must be carried out ”more safely and carefully that it was before” these incidents.

He further called on Norway’s nuclear industry to be more open relative to the kind of work they are doing and the consequences it could lead have.

”Society and local residents must get comprehensive and understandile information to participate in the decision making process,” said Bøhmer. ”Bellona has noted that Kjeller is having success in the sphere of openness, and this visit to the research center confirms this.”

But Bøhmer also said that members of the Norwegian nuclear industry are as given as anyone else to hyping the successes in their work while remaining silent on problems and incidents.

This level of the industry, said Bøhmer, ”still need to learn how to openly speak about problems.”