MURMANSK – The Kola Nuclear Power Plant last week held a large-scale two-day long accident drill modeled on the conditions of the catastrophe that destroyed Japan’s Fukushima Daiichi plant on March 11, 2011 in an event that was followed by more than 20 international observers.

Published on September 3, 2014 by Anna Kireeva 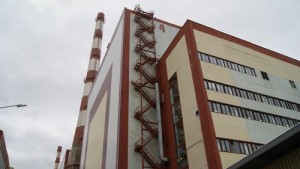 MURMANSK – The Kola Nuclear Power Plant last week held a large-scale two-day long accident drill modeled on the conditions of the catastrophe that destroyed Japan’s Fukushima Daiichi plant on March 11, 2011 in an event that was followed by more than 20 international observers, and which received universally high marks.

But the drills are cold comfort to environmentalists that have their eyes on other deficiencies at the Kola NPP, namely the plants first two aged reactors, which are already operating on borrowed time, and will in all likelihood be granted yet another 15 years of operation. The Kola NPPs first two reactors went into service in 1973 and 1974, respectively. Both reactors were designed for 30 years of use, and the reactors should be retired in 2018.

But plant officials insisted in late June that the reactors meet contemporary standards for lifespan extensions in a proposal that would not see them taken off the grid until they had operated for three decades beyond their designed capacity.

“Yes, it is important to conduct such exercises, but a successful exercise can’t hide the fact that Kola NPP is still an aging time-bomb.”said Nils Bøhmer, Bellona’s general director and nuclear physicist. “The Kola NPP has already received licenses to  prolonged the use of its oldest reactor until 2018, and will unfortunately get another prolongation because  building of replacement reactors is  far in the future. In an worst-case scenario the oldest reactors at Kola NPP could be in operation until 2030.”

Russia’s nuclear industry stages mock emergencies with the assistance of emergency services each year at one of the countries 11 nuclear power plants. Some 1500 personnel and 150 different specialized emergency apparatus have been engaged in the drills at Kola NPP before an audience of German, Spanish, Norwegian, Finnish, French, Swedish, South Korean and Japanese experts. The first day of the drill was spent organizing cooperative efforts between all who participated in the practice disaster. They were connected via video link the crisis center of Rosenergoatom, Russia’s nuclear power plant utility, to where real time information on emergency operations where sent and coordinated.

According to the Kola NPP’s official website, personnel taking part in the technological scenarios of the drill used full-blown simulations in a simulator that has only recently been brought online after plant modernizations. The simulator allows for the enactment of any situation, including those that fall beyond design basis accidents. The radiological portion of the simulator is based on automatic system controls for radiological conditions.

“You can’t do everything in simulators and computers,” Vasily Omelchuk, the director of the Kola NPP told observers. “For us, it was equally important to develop protocols for maintaining the health and lives of personnel. Therefore, within the framework of the drill, we conducted a simulation of sheltering personnel in defensive structures with a following evacuation of the plant premises.”

Strategic and maintenance staff also eliminated in a timely fashion defects from systems and equipment as part of the simulation. Consequentially, total control of the reactor installation and safety systems were established.

A simulated fire in the plant’s diesel generator section was also extinguished, and a pretend victim was treated by medics.

The radiation safety service at the Kola NPP conducted environmental monitoring on the plant premises and along its defensive barrier zone. Dosimeter inspections were also organized, as were decontamination measures at the plants railroad shelters and vehicles.

On day two of the simulated accidents, specialists practiced assuring proper heat venting of the reactors under prospective conditions of a complete power blackout and the evacuation of Polyarny Zory, the town nearest the Kola NPP.

A simulated evacuation of Polyarny Zory. (Photo courtesy of b-port.com)

“This was a complicated simulation, but we rehearsed it to completion,” said plant director Omelchuk. “We confirmed the up-to date nature of the technology we’ve chosen, the capabilities of out anti-emergency and the readiness of our personnel to handle emergency situations.”

The Kola NPP revealed its new system of portable diesel generators to handle blackouts throughout the plant, and power driven pump stations.

Emergency brigades demonstrated the functions of a unique ring system of pipes, through which in emergency circumstances cooling water can be pumped to reactors and spent nuclear fuel storage pools.

Kola NPP took special pains with this system as lack of coolant and power to run pumps were the main cause of the triple meltdown at the Fukushima plant after it was devastated by an 11-meter tsunami. Kola NPPs ring pipe system is equipped with automatic electrical heating to assure its functioning in the sub-zero temperatures of the Arctic nuclear plant, the KNPP website said. Alexander Shutikov, Rosenergoatom’s deputy general director, said that Kola NPP has been outfitted with mobile technology – as have other nuclear power plants in Russia – since 2011 and 2012.

“The Rosenergoatom concern places a great deal of emphasis on emergency reaction and readiness for work in emergency situation, and therefore after the Fukushima accident, we fortified safety systems with portable technology,” said Shutikov, according to the Kola NPP website.

Toting up the drill’s results

According to director Omelchuk, the drills were a success.

“In my view, the drills were conducted very effectively, and were necessary and useful,” he told Murmansk’s Murman television news (in Russian). “We fully practiced each of the scenarios, all of the exercises that were planned. This includes bringing the whole strength and means of the KNPP into full preparedness. So I think the drill went well.”

According to Marit Jacobsen, a representative of Norway’s Consulate in Murmansk who was an observer at the drills, the drill was conducted professionally and fully.

“We observed many aspects of the drill – a fire, the switching on of back up generators during a complete station blackout,” Jacobsen told Bellona in an interview. |We were convinced of the professionalism of Kola NPP’s personnel.”

She said it was important for Norway to be sure that Kola NPP management is devoting serious attention to the plant’s safety, as the consequences of an actual accident could impact Norway.