Published on September 29, 2014 by Charles Digges 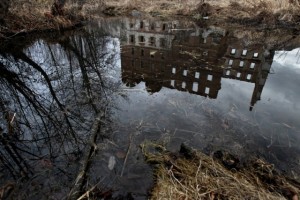 Yevgeny Kudryatsev, head of the Federal Service for Environmental, Technological and Nuclear Oversight’s (Rostekhnadzor’s) department for nuclear fuel cycle facilities safety, made the announcement late last week as a conference in Vienna.

In his comments during a side-interview with WNN at the 58th International Atomic Energy Agency (IAEA) General Conference in Vienna, he let go some disturbing news about just how much damaged fuel Russia has in storage.

He said told WNN it amounted to “a few hundred tons” of bad quality fuel from prototypes of the Beloyarsk nuclear power plant, and damaged fuel for Chernobyl-type RBMK reactors, which don’t come up to snuff for long-term storage requirements.

Russia has yet more damaged spent fuel from research facilities that’s been transported for reprocessing, plus damaged fuel from decommissioned nuclear submarines, which is still in storage.

The admission has raised immediate safety concerns among environmentalists, who questioned what has been done with international funding to safely secure this fuel.

Spent fuel that has sustained heavy damage can safely be stored in canisters under conditions of constant monitoring, WNA reported. But the damage implies the possibility of addition releases of fission products that can interact with the typically zirconium-type cladding, or cylinders, surrounding the fuel, as well as with the storage canisters themselves.

Yet, this is under perfect conditions – conditions the Russian nuclear industry is not famous for maintaining.

“It is alarming that Rostekhnadzor has acknowledged that Russia still has ‘a few hundred tons’ of damaged fuel, part of which comes from the Russian Naval nuclear fleet, which is still in storage and won’t be dealt with for another 16 years,” said Nils Bøhmer, Bellona’s managing director and nuclear physicist.

“This raises questions of what is happening with the spent nuclear fuel from internationally funded nuclear submarine decommissioning efforts in Russia’s northern fleet.”

Closing the fuel cycle with MOX

Kudryatsev’s apparent wish is to get the fuel out of storage, as well, though he didn’t address why international funding long ago directed to its transport to Mayak had evidently been spent elsewhere.

He told WNN that: “My view is that it is better to try and reprocess, rather than store, damaged fuel to avoid the problems associated with its long-term storage.”

MOX is a fuel type that has met mixed success, and poses far greater radiological dangers due to its plutonium content, as well as the challenges of safely storing its spend product. Long term storage of MOX spent fuel is not practical because of the damage risks to its zirconium cladding. This stress, reported WNN, results from a build up of helium decay, posing difficulties not only for storage, but transport as well. It therefore has to be reprocessed, something Kudryatsev could be achieved in an overhaul of Mayak.

A cut-away model of the BN-600 fast neutron reactor on display at the Beloyarsk Nuclear Power Plant, (Photo: Wikimedia Commons)

But Russia’s efforts at reprocessing fuel at Mayak have for years lagged behind schedule. The facility, one of the most radioactively contaminated industries on the planet, processed about only 16 percent of the used fuel it received in 2011, the last year for which figures are available, the WNN reported. Previous year report similar, and often less, throughput.

Such shortfalls due to shoddy, worn-out technologies at Mayak – plus its decades’ long habit of illegally dumping highly active reprocessing byproducts into local water sources – make it unlikely that the hazardous facility will meet Rostekhnadzor’s goal of 100 percent reprocessing throughput by 2030.

At current, Mayak has such overloads that it’s essentially considered a spent nuclear fuel and radioactive waste storage site, with a kind of auxiliary reprocessing unit.

Kudryatsev said all these difficulties would be overcome by updating the RT-1 reprocessing unit at Mayak in the short-run, and decommissioning it by 2030. Meanwhile, Mayak is expected to open a MOX fabrication facility this year, followed by a pilot demonstration for spent fuel reprocessing that would be completed by 2016.

Spent nuclear fuel is also expected to be taken out of wet storage at Mayak and put into dry storage, which is preferable. But Kudryatsev gave no timeline on that.

Kudryatsev also envisioned the opening of an RT-2 plant – something that’s been on the drawing board at Mayak for years – to reprocess spent nuclear fuel from Russia’s lines of VVER, Chernobyl-type RBMK, and its two fast neutron, or BN reactors into MOX or another fuel called “Remix,” – a regenerated mixture of uranium and plutonium oxides – thus completing the closes fuel cycle.

Bøhmer said further shipments of heavy-duty legacy nuclear waste and spent nuclear fuel from Andreyeva Bay in 2016 left little wiggle room for Mayak and Rostekhnadzor to be dilly-dallying over expensive retrofits to produce MOX. The efforts – which are likely to stall because of financial shortfalls, lack of technical expertise, or Mayak’s generally hazardous condition – will just create further traffic jams to final disposal of Cold War radiological hangovers.

Bøhmer continued that Mayak is simply not in any state to safely store spent nuclear fuel awaiting reprocessing.

“Are they just moving spent nuclear fuel from one storage facility to another, and how can [Russian state nuclear corporation] Rosatom guarantee safe storage at Mayak?” Bøhmer asked rhetorically. “This situation underscores a need for more information about the technical conditions of storage of spent nuclear fuel at Mayak.”