For the first time since Japan’s nuclear disaster three years ago, authorities are lifting restrictions for residents to return home within a tiny part of a 20-kilometre evacuation zone around the Fukushima Daiichi plant, cancelling evacuation orders for 357 people and declaring radiation exposure levels in a corner of Tamura City to be “safe.”

Published on April 2, 2014 by Charles Digges 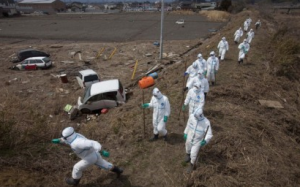 For the first time since Japan’s nuclear disaster three years ago, authorities are lifting restrictions for residents to return home within a tiny part of a 20-kilometre evacuation zone around the Fukushima Daiichi plant, canceling evacuation orders for 357 people and declaring radiation exposure levels in a corner of Tamura City to be “safe.”

If all of these 357 residents of Tamura City’s Miyakoji district decide to move back, it would reconstitute 118 households in the area, but many of the now former evacuees, who will be soon losing their evacuee status, are reluctant to return.

“Many of our friends and neighbours won’t come back,” Kimiko Koyama, 69, told Reuters news agency. “There are no jobs. It’s inconvenient and young people are scared of radiation.”

“People want to go back and lead proper lives, a kind of life where they can feel their feet are on the ground,” Yutaro Aoki, a Tamura resident who works for a non-profit organization overseeing the city’s recovery, told the Associated Press.

The Great East Japan earthquake and subsequent tsunami off Japan’s northeastern coast on March 11, 2011 led to the worst nuclear disaster since Chernobyl in 1986. Three reactors melted down, with the resulting radiation fallout forcing some 160,000 people from their homes. Still of a BBC broadcast from inside the exclusion zone around Fukushima near Tamura City.

Around 138,000 Fukushima residents remain in temporary housing or with relatives, and some started over elsewhere.

Meanwhile, other cities, towns and villages in the exclusion zone have been reduced to ghost towns snarled with weeds and piles of bagged contaminated foliage thanks to continued high levels of radiation.

Temporary visits inside the zone had previously been allowed, and about 90 people were staying with special permission, according to Tamura city hall.

New stores and public schools are planned to accommodate those who move back.

Nils Bøhmer, Bellona’s general director and nuclear physicist said that was understandable that people are hesitant to return to this city that once boasted a 38,000 strong population, given the relatively high radiation exposure limits that the government has declared to be “safe.”

“It’s predictable that some people in this city don’t want to go back because of high radiation levels, especially if they would resume living there for decades,” he said.

The radiation level the government has considered acceptable in this small corner of the Fukushima Prefecture just within the 20-kilometer exclusion zone is 20 millisieverts a year – the level considered safe for nuclear workers under Japanese law.

For comparison, the Ukrainian government set safe exposure levels surrounding the Chernobyl nuclear power plant at 1 millisievert per year before allowing people to move back into the plant’s proximity.

In Norway, which has no commercial nuclear power plants and has never had any nuclear accidents, annual exposure to natural background radiation is some 4 millisievers per year, said Bøhmer. The country does maintain an research reactor at Halden.

World Nuclear News reported that, as of Tuesday, the Miyakoji district has seen shops opened, refuse collection and recycling resumed and a new health clinic and play center for children opened for the first time since the initial disaster. Tax breaks have been announced to encourage the return of small businesses, said WWN.

A still from a BBC broadcast from within the exclusion zone around Fukushima near Tamura City.

Rush mentality to put Fukushima in the past

Japan had earlier pledged to reduce exposure levels to 1 millisiever per year in the contaminated zone, but under Prime Minister Shinzo Abe, the government has significantly raised the so-called “safe” exposure level at which areas of the Fukushima prefecture can be stripped of their evacuation status.

“If the Japanese government wishes to see mass resettlement, it should downwardly revise its ‘safe’ exposure level to levels that were imposed around Chernobyl in Ukraine,” he said.

For now, the division between those willing to return to the Miyakoji distric and those who would prefer to strike out elsewhere after three years of living in temporary housing is drawn between young and old, with more elderly residents preferring to go home. Families who have fears about the impact of radiation on their children are balking.

The effects of the Fukushima accident have been exacerbated by a drastic loss of confidence in the authorities.

Regardless, government benefits for evacuees from the Miyakoji district of Tamura City will soon be stopped.

The formerly anti-nuclear Abe, who is now decidedly pro-nuclear, seems anxious to put the Fukushima disaster in the rearview mirror.

He intends to see some 30,000 people resettled in the exclusion zone this year. About a dozen other municipalities have been categorised by the government as “ready to return,” said WWN. It is expected by Abe that these communites will return one-by-one through this year.

The resettlement policy, suggested Bøhmer, is driven by the financial imperatives of a government that has, since the Fukushima, seen its first trade deficits since World War II.

Evacuees now receive government compensation of about 100,000 yen, or $963 US, each per month. Those who move back get a one-time grant of $8160 as an incentive. The monthly compensation will end within a year for residents from areas where the government decides it is safe enough to go back and live. A still from a BBC broadcast from inside the exclusion zone around Fukushima near Tamura City.

The radioactive plume from the Fukushima plant did not spread evenly, so some areas outside the 20-kilometre radius are unsafe.  Decontamination on an unprecedented scale is ongoing in Fukushima, but some places may not be safe to live for decades.

Nuclear restarts may be further away than Abe thinks

Abe is also pushing hard see the 54 nuclear reactor in Japan that were idled or undergoing repairs when the tsunami struck Fukushima restarted. Prior to the disaster, nuclear accounted for 30 percent of Japan’s energy mix.

The resource poor nation has since been forced during the nuclear blackout to rely heavily on expensive Liquefied Natural Gas imports to keep the lights on.

According to a Reuters analysis, however, as much as two -thirds of the reactors currently idled for inspections may never see power up again.

As few as a third, and at most about two-thirds, of the reactors will pass today’s more stringent safety checks and clear the other seismological, economic, logistical and political hurdles needed to restart, the analysis shows.