Three years after Fukushima, Japanese anti-nuke sentiment strong, but fading on the street

Three years down the road from triple reactor meltdown at a nuclear power plant in Japan’s Fukushima prefecture in a disaster that has become synonymous with Chernobyl, the drumbeat of headlines from the region has hardly become more encouraging. This year, it’s not just a laundry list of more near catastrophes, but an apparent loss of interest in forceful public opposition to nuclear power. 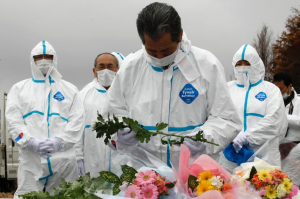 Three years down the road from triple reactor meltdown at a nuclear power plant in Japan’s Fukushima prefecture in a disaster that has become synonymous with Chernobyl, the drumbeat of headlines from the region has hardly become more encouraging. This year, it’s not just a laundry list of more near catastrophes, but an apparent loss of interest in forceful public opposition to nuclear power.

Where the Japanese public remained stalwart in its repugnance to atomic energy in mass-scale marches held during the first and second anniversaries of the disaster – taking to the streets in the hundreds of thousands – their resolve seems to be flagging in a war of attrition with a formerly anti-nuke government that has become decidedly pro, and flailing efforts to bring the Fukushima Daiichi plant to heel.

“We would hate to see the Japanese government pave over public opinion by pretending there are no other options to nuclear power,” said Nils Bøhmer, Bellona’s general director and nuclear physicist.  “The disconnect between the government and a strong independent regulator was the main cause of the Fukushima disaster. The Japanese people must continue to make their voices heard.”

On March 11, 2011, the Fukushima Daiichi plant was decimated when it was hit by an 11-meter tsunami caused by the Great Eastern Japan Earthquake, completely severing all cooling arteries for the plant’s reactors and fuel pools. The result was a triple reactor meltdown, hydrogen explosions and the evacuation of 160,000 people living within 20 kilometers of the plant.

A year later, in 2012, the news churning out of the plant focused on the absolute technical chaos of trying to bring the three reactors under control.

By 2013 the reactors had reached so-called cold shutdown, but leaking radioactive water from the earliest attempts to inundate the molten nuclear fuel with water cannons and seawater continued to spill into the Pacific Ocean and into the ground at disastrous rates.

But the kaleidoscopic view of government and industry efforts, dogged by the rage of Japan’s usually protest-averse citizenry, showed that whatever was going on at the plant was still largely an act of improvisation – some high tech innovations held together by spit and string. Anti-nuclear protests yesterday in central Tokyo before the third anniversary of the Fukushima disaster were remarkably thinner than they were last year. (Photo: CNIC)

This year, Tokyo is pushing hard to realize its decontamination goals in the area surrounding the plant and get people re-situated in the homes they had to abandon three years ago – something evacuees are not too keen on.

The more general question of whether or not to use nuclear power, and turn to the streets to say it, however, seems to be one that is losing some of its original steam.

Various news reports indicate that the passion and numbers against visibly opposing a nuclear reset in Japan has shriveled as Prime Minister Shinzo Abe has, since last year, grown impatient with Japan’s nuclear halt and wants to see 48 reactors that were idled or shut down in the wake of the Fukushima meltdowns restarted within two years.

And despite the coverage that the anniversary itself will receive locally, the cataclysm seems to have lost its special place in the national consciousness.  Mishaps at the troubled nuclear plant, as frequent as they have been, barely register in the west and south of Japan, while people not directly affected by the tsunami assume that reconstruction is progressing as planned.

In a survey of survivors conducted last month by the Asahi Shimbun newspaper, 76 percent said they felt that the disaster was fading from the public’s memory, while 71 percent complained that reconstruction of the tsunami-hit coastline had made little or no headway.

Figures like this are are making some anti-nuclear campaigners lose heart about maintaining the full-blown opposition they once seemed to command.

Some Japanese observers have suggested that this flagging interest results from Japan’s lack of natural resources and resignation to the notion that it just doesn’t have many other options than to revive its nuclear infrastructure. Besides, says the government, relying on foreign liquefied natural gas imports is just getting too expensive, Hideyuki Ban, co-director of the Citizens’ Nuclear Information Center (CNIC) in Tokyo told Bellona by email.

At the same time, polls in Japan continue to reflect that the population would prefer to see a gradual exit from nuclear power  – something the government promised, but then reneged on.

Ban chalks the disconnect between what people are thinking and what they are doing to show their discontent to Japanese cultural aversion to making a spectacle.

He said this is especially the case now when the government is stumping so loudly about its new nuclear safety culture.

A new safety regime or an old rubber stamp?

Enter the newly constituted Nuclear Regulatory Authority (NRA), which was born out of the Fukushima crisis to constitute a truly independent oversight body. The advent of the NRA has given confidence – at least in the rhetoric of Abe – that Japan finally has a rugged safety regime.

But in many ways, the NRA is still struggling to define itself as it take on hundreds more staff. This new-blood transfusion is not strictly aimed at what to do about the smoldering radioactive wreckage at Fukushima.

The only government agency that can green light the restarts is the NRA as it performs its renowned six-month-per-reactor stress tests. And even after getting approval from the NRA, the community surrounding the reactors slated for restart have to approve as well – something the CNIC’s Ban said would “give the people power over the reactor restarts without having to stand in the street with a sign.”

But the Authority is having a hard time juggling the infusion of restart applications – some 17 utilities applied last year – and coordinating what is estimated to be 40 years and $30 billion worth of decommissioning the Fukushima Daiichi plant.

Abe is also evidently tired of seeing so many of the 160,000 evacuees from the disaster living in tumble down government villages that were only meant to house them for a maximum of three years, or until this year.

Abe is actively encouraging some 30,000 former residents of towns inside the 20-kilometer evacuation zone to move home within the near future.

The Ministry of Environment contracted work to clean up the 11 most heavily contaminated townships within the evacuation zone, with the aim of bringing the average annual radiation dose to 20 millisieverts per year based on a range suggested by the International Centre for Radiological Protection.

But much of the decontamination work has been shoddy, and radioactively contaminated materials that should have been disposed of were just piled up like brush.

Move home or move on

One area whose evacuation order will be lifted, Japanese media reported, is Fukushima prefecture’s eastern Miyakoji district. A group of 358 residents is expected to return to their homes after Kazuyoshi Akaba, the trade and industry minister, told them it was safe. The area suggested to be repopulated on April 1, when the Abe government lifts its evacuation restrictions.

With no evacuation order in place, many who have been living elsewhere on government subsidies will essentially be forced into moving back, or to make other arrangements. It’s a strong arm tactic that 72-year-old evacuee Hiroshi Kanno predicted the government would eventually resort to in an interview with Bellona last year in Fukushima

But the 20 mSv level that the Abe government is insisting is safe is going to be a tough sell to a remaining 30,000 Fukushima prefecture residents who will also be expected to return home.

A study published by the US Proceedings of the National Academy of Sciences indicates that a child in the area affected by the Fukushima disaster will have an elevated risk of contracting cancer during his or her lifetime, the Kyoto News Agency reported, and that is encouraging to no one.

The government has also acknowledges that at least 50,000 people evacuated from the exclusion zone may never see their homes again. Another 54,000, reported Asashi Shimbun, newspaper, cannot safely return to their residences until 2017.

The government had also set a lower, long-term target of 1 millisievert – which was the level the government last year said would be required before allowing people to move back into areas of the exclusion zone.

As the new dosage rate of 20 mSv is the limit for nuclear workers over a period of 5 years, a stiff majority of those being asked to move back would prefer to observe the 1 mSv target as their safety yardstick.

Mostly, though, it boils down to an issue of trust between Fukushima refugees and the government – a trust that Miyakoji district resident Takashi Tasaki told Radio Australia he no longer has.

“At first, government wanted to lower radiation to one millisievert, but now they say 20 millisievert is acceptable,” Tasaki said. “I cannot trust the government.”