France vows to lower nuclear dependence to 50 percent by 2025, and commits to new emissions cuts

France’s President François Hollande Friday renewed campaign promises that swept him to power in May to reduce his country’s reliance on nuclear energy to 50 percent by 2025 from its current level of more than 75 percent – the world’s highest atomic energy dependence rate.

Published on September 17, 2012 by Charles Digges 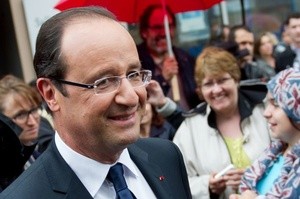 The move by France sends a message that it would like to bring itself into closer consensus with a host of European nations, namely Germany, that are abandoning nuclear power within the coming decades, or like Italy, which opted last summer not to begin nuclear programs at all.

Switzerland and Belgium are also expected to shutter their nuclear programs as the nations try to round a bend toward renewable energy both in the wake of last year’s Fukushima disaster and under pressure to reduce greenhouse gas emissions.

Speaking at an environmental conference in Paris, Hollande said he would consider far larger cuts France’s carbon dioxide emissions than those forwarded by his predecessor, Nicolas Sarkozy – recommending a 40 percent cut in emissions by 2030 and a 60 percent reduction by 2040, well beyond the  current European Union-wide target of 20 percent by 2020.

“We have an ambitious strategy,” Hollande told an environment conference in Paris in remarks reported by Euractiv, and said he “regretted” the delay in French diversification into renewable energy, promising a strategy based on energy efficiency and renewable energy to effect an energy transition in France.

One way French energy diversification would not be achieved, Hollande emphasized, was by the environmentally controversial practice of hydraulic fracturing for shale gas. The relatively new technology, whose gold rush mentality has outpaced safety considerations for water table contamination and releases of methane gas – a greenhouse gas 20 times more potent than carbon dioxide – will, said Hollande, remain banned in France, Euractiv reported.

Holland added that he would push for a 30 percent cut by 2020 if other rich economies followed suit with a similar level of ambition. He also said Europe would reiterate its 20 percent cut target at the next round of UN climate talks in Doha in November.

At United Nations’ climate talks last year in Durban, South Africa, almost 200 nations agreed to sign a new, legally binding deal to cut greenhouse gas emissions by 2015 and for it to come into force by 2020.

Hollande reaffirmed France’s commitment to getting a new global climate deal signed by 2015, adding that France would be happy to host the 2015 UN conference, said Euractiv.

The 34-year old nuclear power plant, located close to France’s borders with Germany and Switzerland, is a magnet for protestors due to its age and location in a seismically active zone.

The Fessenheim plant is slated to close in 2017, but Hollade proposed moving its closure up by several months to 2016.

Hollande also cited another nuclear incident in France a year ago, when a fire near a furnace at the Centraco radioactive waste storage site at the Marcoule near Nimes led to an explosion that killed one person and injured four more.

That accident also averted any radiation released, but caused jitters in the world nuclear community, coming so quickly on the heels of the Fukushima disaster as it did.

Hollande’s remarks on lowering France’s nuclear dependence dovetailed with pledges from Japan to shutdown its nuclear reactors by 2040.

But the energy plan set forth by Japan, also on Friday, is rife with loopholes that would allow many of Japan’s reactors – especially those currently under construction – to run decades beyond the announced 2040 nuclear closure date.

Many pro-nuclear critics have cast France’s decision – as well as the far more ambitious pledges of Germany – as short sighted, knee-jerk reactions to the post-Fukushima backlash that will land them in hot water as they turn their back on low emission atomic energy.

“These people will be judged in 2080 for acting in their own interest instead of that of the planet,” Francois Perchet, technical adviser at the World Nuclear University and a former employee of the French utility EDF told French media outlets.